Let’s take a look at the acronym “LT.” It could stand for “Low Threshold” or LaDainian Tomlinson. Possibly even “Limited Temper” or LaDainian Tomlinson. And perhaps, “Loving Teammate” or LaDainian Tomlinson. All of these descriptions help define the San Diego Chargers recently departed running back. After nine impressive seasons with the Bolts, LT was handed his unconditional release on Wednesday. Chargers Team President Dean Spanos delivered the somber, albeit expected announcement at a press conference with LT in tow. It was a less-than-glorious exit for a player many believed was the best in the franchise’s 50-year history. 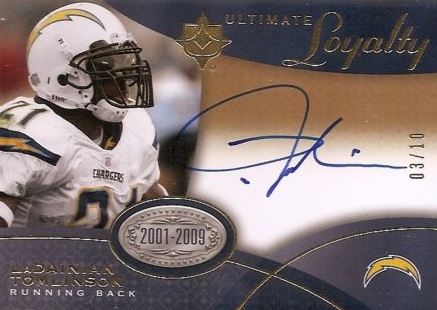 In 2006, he was the best rusher in the NFL. He accumulated a league-leading 1,815 yards on the ground, scored 31 touchdowns and was justly named the league’s MVP. This month, less than four years later, he’s out of a job. At age 30, no less. It’s the exact same age that Jim Brown was when he walked away from the NFL in 1965. Brown went out at the top of his game and had one NFL championship (1964) under his belt. But he felt he had churned out all the rushing yards (12,312) and scored as many touchdowns (126) as he was supposed to as a member of the Cleveland Browns. And with a Hollywood movie career beckoning, he took his good looks and chiseled physique and tackled the 1967 war-action flick “The Dirty Dozen.”  More recently, in 1999, he played – what else? – a football coach in the less-than-memorable Al Pacino/Jamie Foxx sports movie “Any Given Sunday.” 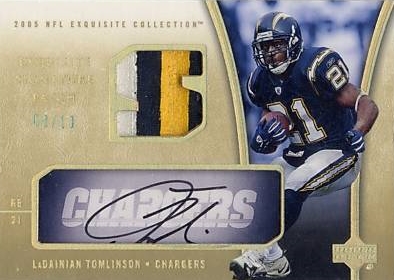 I live in San Diego. I’ve watched LT play since he entered the league in 2001 as a budding star out of TCU. He rejuvenated the Chargers organization like no one seemingly could. Remember, he arrived just three short seasons after San Diego drafted colossal NFL flop Ryan Leaf out of Washington State with the second overall pick in ‘98. Leaf couldn’t find the end zone, while LT couldn’t stay out of it. The latter scored 153 touchdowns during his career as a Charger, while Leaf died a well-publicized NFL death by his own devises. Tomlinson has already tallied 12,490 rushing yards during his San Diego tenure – that’s 178 more yards than that Brown fellow who The Sporting News named in 2002 as the greatest professional football player ever – and I don’t think he’s done yet. In fact, he’s far from it.

As an avid TV watcher in the San Diego market, I’ve also had the opportunity to see LT serve as company pitchman on occasion. He hawks “EasyTurf,” a synthetic grass/artificial turf for your landscaping needs. And while he has more rushing yards than Brown, he’s got nothing on Jim’s acting career. That’s for sure. That’s why I’m confident LT will bounce back on the gridiron, perhaps even with a team from his own division (can you say “C-H-I-E-F-S”?) very soon. Yes, he’s slower than he was at TCU and definitely a bit more banged up, but he’s determined to win a Super Bowl ring before he hangs up his cleats. And while the Chiefs might be a few years away from competing seriously for the Lombardi Trophy, there’s a certain coach in New England who’s always on the lookout for aging talent.