With the NHL on the Olympic break and a roster freeze in effect until March 1, I thought it would be a great time to take a look back at some of my favorite designs that Upper Deck has brought to the hockey market in the last twenty years.  Feel free to comment at the end with some of your personal favorites.

10. 1990/91 Young Guns: Year one brought us a new company with great photography, glossy cards and foil packaging.  Many collectors still get nostalgic when thinking about opening and collecting these cards early in the days of Upper Deck. 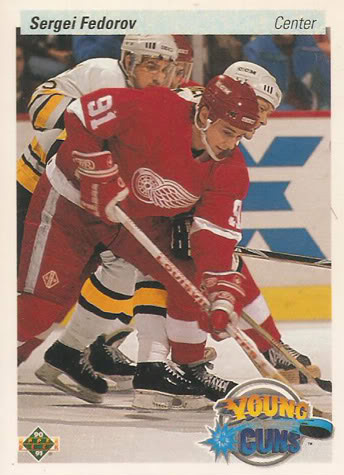 Looking back, I personally loved the design of the Young Guns.  They were very simple, and not a lot different then the base set design at all.  Factor in the chance of getting a Pavel Bure or the Sergei Fedorov Young Gun, and you had a winner.

9.  2004/05 Ultimate Collection Patches: Thanks to a limited in print run with a maximum of 35 copies of any one card, giant patches (and some simply stunning looking cards), all past and future patch cards are compared to this set.  A simple and small head shot, lots of shiny silver and a great big patch; it seems like a simple recipe for success and it certainly was. The checklist for this set was amazing as well; coupling young stars with proven veterans meant high collectability.  These cards still do very well on the secondary market on the rare occasions you see them become available. 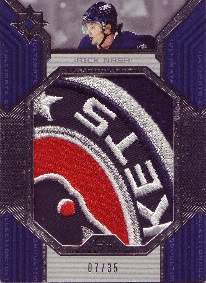 I have personally never owned any of these cards, but I know people who have, and they are stunning.  If you get a chance to own one of these at some point, make it happen.

8. 1996/97 Upper Deck Game Jersey: If memory serves me correctly, this was the first year that game used jerseys made their way into the hockey card market.  The design is simple, yet appealing.  Hitting them were long odds though, making them huge pulls of the day. A landmark set in terms of innovation, we owe a lot of our box break hits or pack hits to this concept and set.
Every time I see one of these cards show up on a message board’s show and tell section, it is highly responded to in a positive fashion. Again, I have never personally owned one of these cards, as they arrived in the time I took off of collecting to focus on my studies. But I was still close to the hobby, and remember thinking that player jerseys in trading cards were so cool. Since getting back into the hobby, I have been a game used junkie. 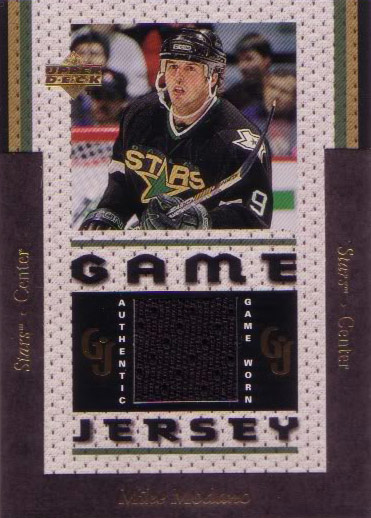 7. 1999/00 & 2003/04 Upper Deck 500 Goal Club: Easily some of the nicest cards ever produced, and the kicker? These were inserted into random products.  Some of them also have very rare autographed versions as well.  These cards do very well on the secondary market a decade after the original release.  This is something I feel could be updated again soon, as there are a few guys who have hit the 500 goal mark recently that could be included.  Among the names that could be included in this “update” set would be: Pierre Turgeon, Mats Sundin, Peter Bondra, Teemu Selanne, Mark Recchi, Jeremy Roenick, Mike Modano and Keith Tkachuk. The design is fantastic, and the overall eye appeal of the card is still without question. The significance of reaching 500 goals should also not be understated, one of the true measuring sticks for a potential Hall of Fame career. 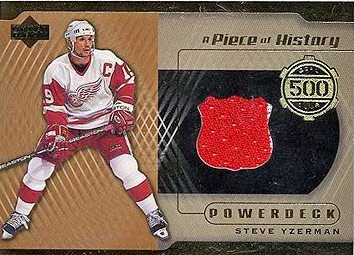 6.  1996/97 Black Diamond: Overall a very esthetically pleasing set.  Black Diamond cards typically do not scan well to show off their true look, but when you have one in hand, you are able to get a better feel for them. A couple of key rookies in this set are the driving force behind it, such as Patrick Marleau and Joe Thronton. Much like today’s Black Diamond, the set was broken into tiers.  At this point, there was only single diamond, double diamond and triple diamond (unlike today’s version that has quad diamond as well). Black Diamond Gold was the parallel version, with the triple diamond gold cards running with only 50 copies of each. 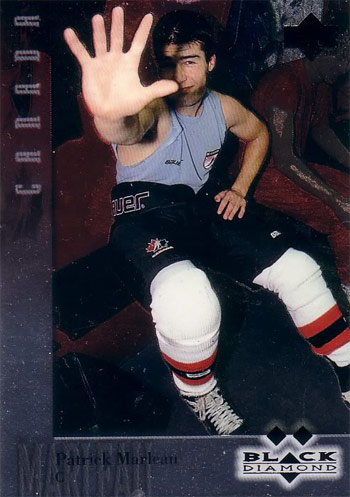 96/97 Black Diamond also gave us the Run for the Cup insert set.  These were limited to 100 copies, which was a very limited print run at that time.  Some of the big names included in this set were Wayne Gretzky, Mario Lemieux, Patrick Roy, Steve Yzerman, Joe Sakic and Mark Messier.  Not a bad start to a checklist.

5.  2006/07 Sweet Shot Ice Signings:  This autographed set from the first release of Sweet Shot Hockey was a winner.  The Ice Signings feature an autographed piece of acetate that looks like a hockey rink.  Looking down on the surface allows you to see the blue line, center ice, as well as the goal areas and all the faceoff dots. Serial numbered to 100 makes it an excellent, but not out of the question set to chase. With a strong checklist for the year of release, you knew you wouldn’t be disappointed if you landed one of them in your pack break. The Ice Signings found their way back into the 07/08 release and once again did very well.  I chose to put the inaugural release on this list. 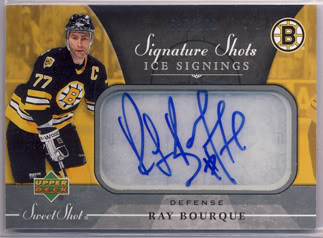 4. 2005/06 SPx Flashback Fabrics:  These cards are actually part of the regular set in SPx, making up one of the most difficult subsets to obtain in recent memory.  Some very short printed cards are in this, making a “Master Set” all but a pipe dream for those looking to do so. A few cards have print runs of ten or under, and another few are limited to just 25 copies, making for a fun, and very challenging set to collect.  The most unique aspect of these cards, however, is the design.  It features a decent size jersey piece (in later years they would use patches as a parallel), and an autograph; but the kicker for me is the quick reference on the front of the card that it was flashing back to.  It gave an actual date or event of significance for the player pictured on the card.  For the most part, these were significant events in the history of the game and things that today’s collector probably wouldn’t remember, so it served as a bit of a history lesson as well. Some of the cards in this set will still command $1,000 or more on the secondary market, proving that it is still a collection that many still appreciate years later. 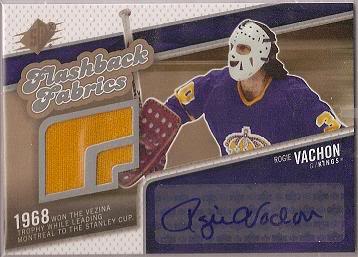 3. 2005/06 SP Game Used Auto Draft: Here’s another autograph set I’m putting in here because of the concept.  Each pictured player has an autograph serial numbered to the position that he was drafted in. Some of the notables in the set are former first overall picks Joe Thronton, Mike Modano and Vincent Lecavalier. The great thing about this is you can once again get a bit of a history lesson: it is not always first round picks that turn out to be stars in the NHL.  Look at players such as Luc Robitallie (/171) and Patrick Roy (/51) among them. A very fun set to collect, but clearly very difficult. Also a great item if your favorite player happens to be in the set. 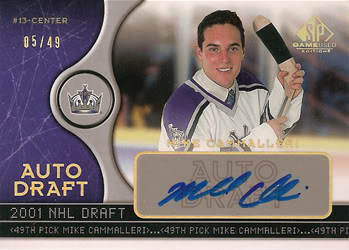 2. 1999/00 UD Retro INKredible: There are two levels in this product, with level two limited to just 25 copies.  Both have matching checklists, and the level one cards are a thing of beauty.  Coming out of 1999/00 Upper Deck Retro, the design on these cards is just that: if the hockey market back in the day featured player signatures on cards, this is what they’d probably look like. 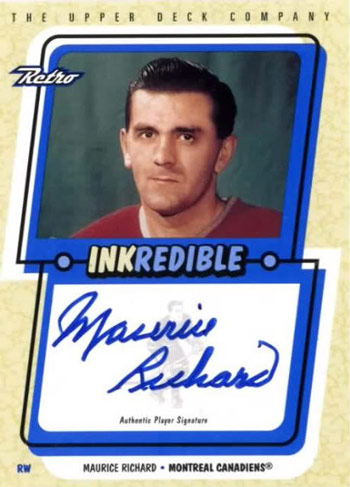 All hard signed with a nice big spot for the player autograph, these cards deliver the goods.  It’s still one of the all time great autograph sets, and heavily collected.  Some of the bigger names in this set fetch big money when they become available. One of the last releases features hard signed cards from former Montreal Canadiens great Maurice Richard; with other greats such as Bobby Orr, Mario Lemieux and Wayne Gretzky on the checklist of only 29 players, it makes for a fantastic group of players (and a quite the accomplishment for those who have finished it).

1.  The Cup “Property of”: Simply put, these cards are fantastic.  They are released in Upper Deck’s highest of high-end releases “The Cup”, and are always 1/1’s.  They feature the nameplate of the pictured player’s game used stick, and if your favorite player happens to be in the set, it becomes a chase for the centerpiece of your collection.  Over the years (starting with 05/06) they have had some of the all-time greats featured in the set including Bobby Orr, Mark Messier, Gordie Howe, Bobby Hull and Tony Esposito to simply name a few. Year in and year out, these cards are very well designed and come with a tremendous amount of eye appeal. If you are one of the lucky few to own one, chances are good that it is a centerpiece of your collection. 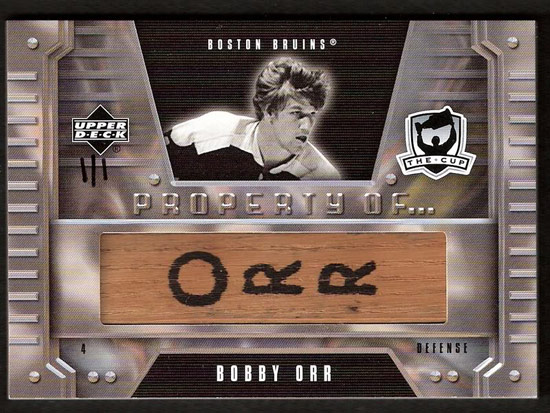 We are interested in hearing about your all-time favorite Upper Deck cards over the years, and what makes them your favorites.  Maybe it is the look of the cards, or maybe it is the player checklist; whatever it is, we want to hear about it. I wanted to thank some of the great members at www.hobbyinsider.net for helping me out with a refresher on some of the nicest cards that have been released, as well as some pictures to go along with the write ups.