Have 2009-2010 NHL Rookie cards? Click here to register them at Upper Deck’s Rookie Card tracker. By registering your codes from the back of your rookie cards, you will have a chance to win a box of cards from Upper Deck!

During the month of January, 2009 first rounder (3rd overall) Colorado Avalance forward Matt Duchene finally turned 19 years old. One thing you typically don’t see out of many first year NHL players (never mind one that still has junior eligibility remaining) is consistency. A quick look at Duchene shows that this is not so much a problem, and he even looks to be getting better as the season moves on. 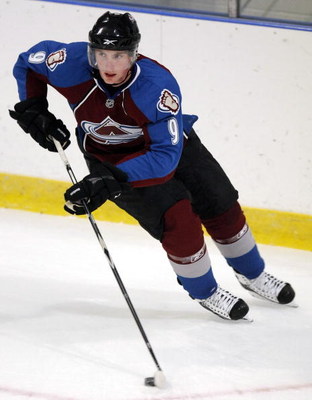 His goal scoring is much improved, along with his overall play.  Matt plays both ends of the rink, and his skating ability is one of the reasons he is able to do so at such a young age.  His play has helped the surprising Colorado Avalanche to a 6th place position in the strong Western Conference, when at season’s start, many thought they would be lucky to compete for the last playoff spot (let alone a division crown). He’s one of only five NHL rookies who have scored a short handed goal this season, and one of five rookie contributors to the Avalanche lineup. These are among the reasons that Matt Duchene has been selected as the Rookie of the Month for January.

The season is past the halfway mark now, which means that there are some certified rookie cards of Matt Duchene available, and certainly some to keep on the radar as they become live. 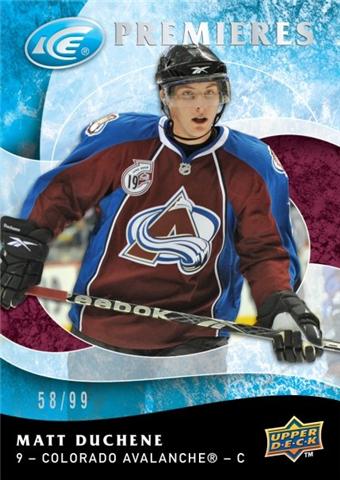 So far here is a list of what is out there for Duchene collectors to have at: 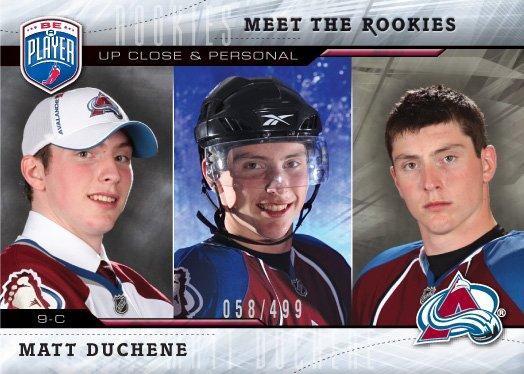 The Collector’s Choice, MVP and Fleer Ultra Upper Deck Series One brands make it realistic for any collector of any age to grab a rookie card of their favorite player, and my favorite among these is the MVP card. With two levels of parallels (Gold Scripts /100, and Super Scripts /25), it gives collectors a chance at an attainable “Rainbow”.  The picture on it makes me smile.  Not many 18 year olds have mastered their “tough” face yet. 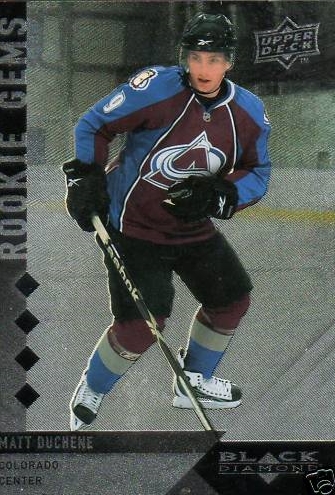 Black Diamond, SPx, Trilogy and Artifacts offer releases that give a chance at a short printed version of Duchene.  Artifacts will be /750 once they are produced, while SPx and Trilogy both limited to under 500 copies worldwide will make things a bit harder on those looking to acquire them.  Black Diamond is another one of the staples in the collecting community but with only one “Quad Diamond Rookie” per box on average, typically you have to open up a bit more product to get the one you are looking for.

A quick look at what appears to be in store for the future this year.

Duchene has been a high mover on the secondary market, with his cards in demand following each new release.  Personally, I am looking forward to the release of SP Authentic.  With a rookie card hard signed /999, a SP Future Watch Limited Patch possibility /100 that will feature a piece of patch and a signature (as well as some interesting combinations that he might be featured on in the Sign of the Times autographed subsets), things will be very intriguing for collectors.

At this point, it is tough to pick out my favorites; I managed to scoop a pre-release photo of the Ice card from the Upper Deck Facebook page. But looking at what is out there, I am reminded of my personal experience at the Upper Deck Rookie Photo Shoot. I was there as a media representative for www.hobbyinsider.net, covering the event for their magazine, “The Insiders Edge”. A picture of me even made it into the Press Release and was on this very blog after the event.  Here is a photo of me interviewing Victor Hedman at the event.  Consider this my “Brag Photo of the Week”. 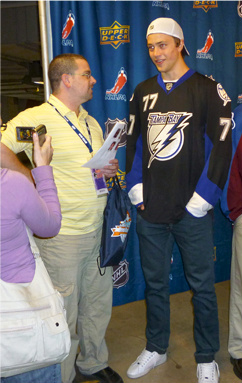 I was able to meet up with Matt, and get an interview with him.  He is a very down to earth character who was supremely confident in his preparations for the year.  There was very little doubt that he was going to make the big club right out of camp in his eyes, and as evidenced by his role as the second line center, he has shown the ability that he knew he possessed. It is interesting for me to see, having been there, some of the photos from that event being used for many of the early season releases for his cards. I have only had the luck of pulling a Young Gun to this point, but as the benchmark rookie card in any year, I was happy to do so.  The nice thing is this, any time Matt Duchene comes out of your pack you are never disappointed.

Going back for a moment to the Rookie Photo Shoot, I have really enjoyed the crispness of many of this year’s photographs; the “action” shots are very well done. The event provides a unique opportunity to get some photographs that would otherwise be hard to obtain.

Focusing back on Matt Duchene to close out: his continued strong play and consistent numbers will help keep him in the Calder Trophy (given annually to the NHL’s top rookie) hunt all season long. His ability to help a team with low expectations get into the playoff hunt could be the swing point for him. It will certainly be tough to deny him should the Avalanche make the playoffs, or even better, win a division title.