The past few days have brought three very large trades involving some of the biggest hockey markets in the league (not to mention some of the largest hobby markets).

Let’s take a look at the three trades, both in a hockey sense, as well as a hobby sense.

Hagman and Stajan should be able to provide some secondary scoring to the Calgary lineup. This appears to be a trade by both teams to help shake things up more then anything else. The hope has to be that a guy like Stajan can win some faceoffs, and feed the puck to a guy like Jarome Iginla on a consistent basis. I think that Ian White is the key to the deal for Calgary. He can move the puck, is a bit of a disturber, and can log big minutes if/when needed.  He proved his versatility last year by jumping up front and playing some good minutes at forward before working his way back into the lineup as a defenseman, and arguably one of the Leafs top two. 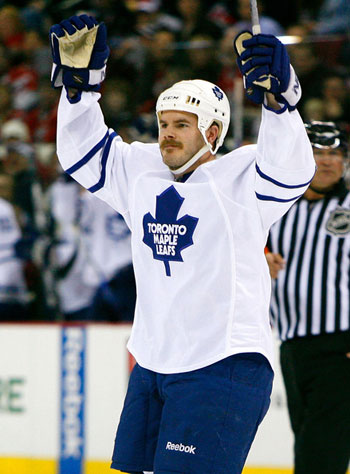 For Toronto, Dion Phaneuf provides another key face of the franchise.  Phil Kessel will no longer have to be the only face that people turn to.  This gives the Leafs another marketable player in town.  He will look to play his game of dishing out big hits and unloading bombs on the power play from the point.  If he can clean up his defensive game in his own end and become a more responsible player, he should be able to return to the form that left him as Norris Trophy candidate year in and year out. Sjostrom will be counted on primarily to help out an abysmal penalty kill and play some quality minutes going forward. Aullie is currently playing in the minors, but can having a six foot six inch guy learning to play the game be a bad thing? Honestly what is the worst that could happen to him? Pretty safe throw in to the deal. 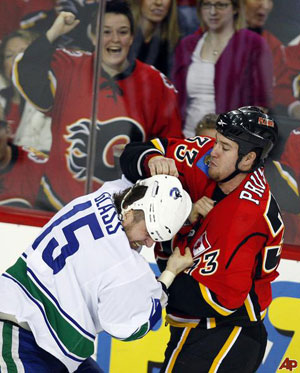 Hobby wise, this deal should most impact Phaneuf.  Over the next few weeks there will probably be a flood of his stuff available on the market as Calgary fans look to offload some of the items that they have of his, and Toronto fans should be looking for some of his key rookie cards.  Young Guns, SPA Future Watch Auto, Ultimate and The Cup (short printed to just 99 copies), can expect to see a lot of buying and selling.  In the end, I think once we start to see some items that feature Dion in a Maple Leaf jersey, we will truly see what kind of effect his presence in Toronto will really have on his trading card market.

Outside of Phaneuf, I can’t see a lot of movement going on.  Maybe Leaf collectors look to move White and Stajan items, but I don’t see them getting any kind of investment on them.  They will continue to move at their current levels and potentially even lower. This could be a great opportunity for player collectors of any of these players involved in the trade to grab some of the lower print run stuff that might be sitting in other people’s collections. If nothing else, it should be interesting to watch how the market goes with these guys.

On the surface, this trade seems to be a swap of unmovable contracts in Blake and Giguere. Anaheim has re-upped with Jonas Hillier who supplanted the former Conn Smythe trophy and Stanley Cup winning goaltender with a great season last year. It was a great playoff where he was able to lead the Ducks past the number one seeded San Jose Sharks, and he’s followed with overall solid play this year. Giguere wanted nothing to do with being a back up. Blake has big money and term left on his free agent deal that he signed with the Maple Leafs following a career year, and has never lived up to the contract. Toskala got himself buried behind a rookie goaltender playing in his first season in North America because of his poor play.  Lots of movable parts here that all ended up getting moved for each other. 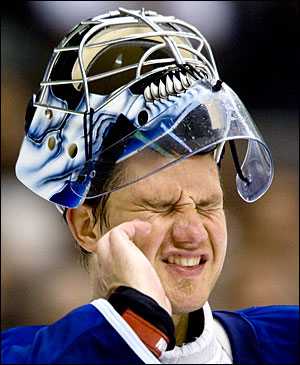 Blake will be able to provide some veteran leadership to a team that is on the verge of becoming real young, real fast.  He has good skating abilities, but is predicable with his moves.  If he gets in the right situation, he might be an effective player for that team. Toskala heads back out west where he will not be the starting goaltender, but will be in a much more friendly market that should allow him to walk the streets freely (unlike the microscope that is Toronto).  Let’s not forget that Toskala’s best years were with San Jose, outside the pressure cooker.  I for one hope he can find his game again; I never like to see a guy run out of town to the point where he is no longer a functional player. 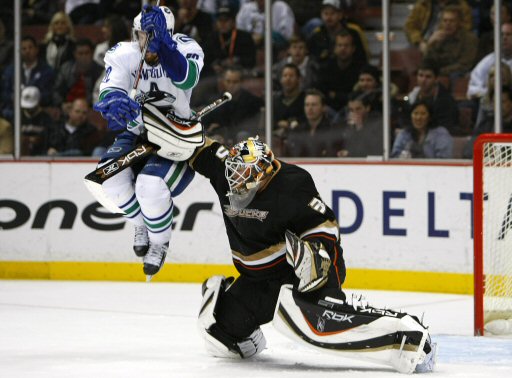 J-S Giguere has been given a chance.  He is joining a manager that he has had previous success with, his most influential goalie coach, and a situation where he is not expected to win immediately.  The interesting component will be how the duties are handed out between Jonas Gustavsson and Giguere.  The plan had been to see what the Leafs had with Gustavsson, but with Giguere still having a year remaining on his agreement past this year, the reigns might be more tempered going forward.  This might allow the Maple Leafs to bring The Monster along a bit slower, and maybe get him signed to a more manageable contract going forward.

Hobby wise, I am not sure how to read into Giguere’s arrival to the Leafs.  Logic says that he should do well, and see a bump up in his items, but he has a very loyal following to begin with.  I don’t see a lot of people off loading their collections because of the move, but there might be more competition for some of his lower numbered items. As for the hobby impact of the former Leafs, Blake and Toskala? They have yet to make a significant impact, but we’ll see what happens in their new environment.

This might go down as one of the weirdest trades in a long time. It turns out there was a snag in the deal, which put it on the backburner after all things seemed to be agreed upon.  Jokinen was needed to play in the game on February 1 against the Flyers before the trade would be officially announced.

When you look at the final pieces of this deal, it seems as though the teams were trading for the other team’s problems, in hopes of being able to infuse energy into struggling squads.  The Rangers have to hope that Jokinen can play some minutes with sniper Marian Gaborik, but with Jokinen being a horse himself and liking the puck on his stick and shooting, I am not sold that it will happen.  Calgary tried, and at times forced Jarome Iginla and Jokinen together with little success, and I see the same happening in the Big Apple.  Depending on his play, I can see Jokinen possibly taking on some local hobby love if he can find a way to return to the form that saw him be a regular offensive contributor (back when he averaged 90 points/season between the first two seasons post lockout).

Prust, on the other hand, will offer some much needed sandpaper to a lineup that seems to have no faith in what off-season acquisition Donald Brashear brings to the table each night (he’s been a healthy scratch more often then not recently).  Prust should be a player that the Big Apple fans really take to; it wouldn’t surprise me at all to see him gain a bit of a local following there. 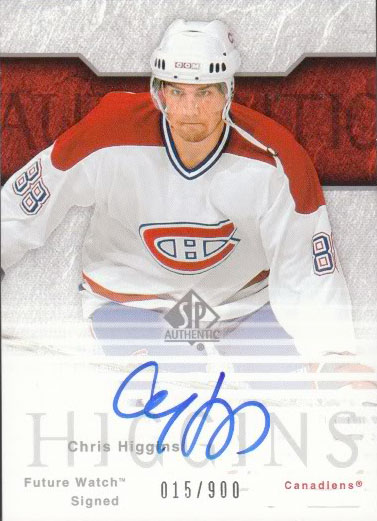 When it comes to Kotalik and Higgins going to Calgary, I see a situation involving two guys with high expectations simply not working.  Both have talent and a pedigree to work from.  Coach Brent Sutter in Calgary has to hope that these guys combined with the four new acquisitions will somehow work to form the core of the four forward lines on his team.  This is the first time I can remember a team in a situation where they feel they have a legitimate chance at advancing in the Stanley Cup playoffs go through a turnover of half of their top twelve forwards. It will be interesting to see how this situation plays out. 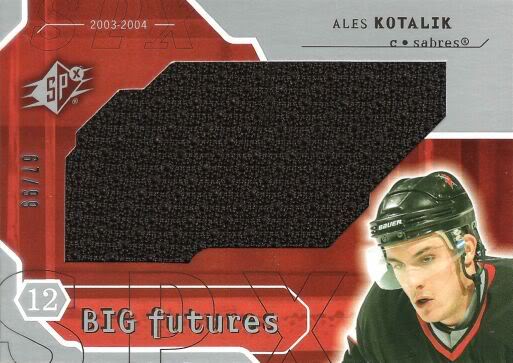 The pre-Olympic deals have begun.  This is probably just the start of what should be a very intriguing next month as the trade deadline is only days after the freeze.  Mark March 3, 2010 on your calendar now if you have not yet done so already.

Oh, and in case you haven’t seen it yet, check out for the newest rookie to win “Rookie of the Month” honors, and don’t forget to enter in all your rookie card codes from the Upper Deck products you have collected so far. Not only can you win prizes, but the site has some great features that allow you to track rookies and their cards all season long!