Five Reasons to Get Excited for SP Authentic Football

Every year I love SP Authentic Football for a number of reasons. If you’ve been following my posts here, you know much I love the product. In fact, it’s been a constant in my collection since I first started buying cards, and this year is no exception. Many people have me why I look forward to it so much, so here you go: my top five for 2009.

These five items are why I think this product is a fine addition to the SP Authentic line, and when all is said and done, aspects from all five will be resting on my shelf come the beginning of the 2010 card season.

Not every person can make a name for themselves running in touchdowns or catching passes, which is why many of them never get much love in the hobby. For SP Authentic, and many other Upper Deck products this year, these players are finally getting their due. I have a few of them on my radar already, especially those of mullet sheathed pass rusher Jared Allen. Despite having very little to do with the high powered, high scoring, hobby MVP filled Vikings offense, Allen is a menace on defense and has built a HUGE fan base in Minnesota. 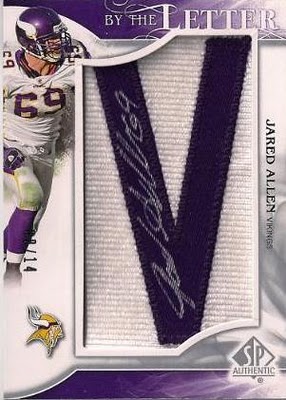 The problem was, before 2009, he had had a total of one autographed card. Now, in SP Authentic he has more than five, including a coveted SP Authentic By The Letter and duals and triples with Mario Williams, Albert Haynesworth and rookie Tyson Jackson. Williams and Haynesworth have built similar reputations in Houston and Washington, so it’s only natural that they get some face time as well. In addition to the aforementioned people, fan favorites like Ray Lewis, Lance Briggs and other monsters of the gridiron are getting attention, which I think is awesome.

4. A Great Looking Set All Around

It’s rare that a set features a complete win in every subset, but with 2009 SPA, things are looking top notch. Each card is completely new in its appearance, and the smoky feel to the cards definitely reflects the hotness they bring to the hobby each year. Even the old favorites like the rookie authentics and the By the Letter autos look fresh and new, which makes me want to go wild on ten cases and hope that I can get a few sets together. There are also a few new additions to SPA that look great, including the new dynasties autos. These are cards with sewn patches and autographs that focus on the Niners, Steelers and Cowboys: teams that ruled their decades with multiple Super Bowl wins. 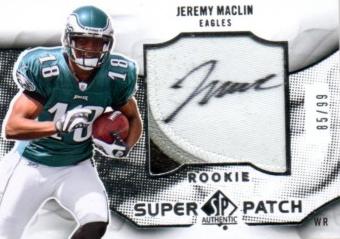 Collectors love signed memorabilia cards, and now SPA has a brand new subset that could be one of the best looking cards of the year. For each of the rookies that were a part of the 2009 NFL Rookie Premiere, there is a card that features a signed swatch of player worn jersey instead of the normal swatch and autographed card. These cards are so cool looking, that I actually planned months in advance to be able to try to get a few of the ones I wanted. To have a rookie patch auto is one thing, but to have the rookie sign a super swatch is even more awesome.

2. The Rookie Auto Patches Look Better Than Ever 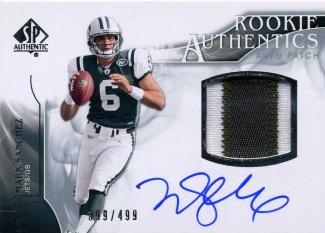 I can’t even tell you how amazing I think the Rookie Auto Patches look this year, as the design has definitely taken the cards to a new level. Team color borders are making their debut for this set, and they visually add a lot to an already sought after card. People always say these cards are valuable because collectors can’t get enough of the hard signed autos and multi-colored patches, but I also think it’s because they always look so good. I did a retrospective a few months ago, and throughout the time I was writing, I was thinking about how there wasn’t one bad year. 2009 is no exception.

Having a set with completely hard signed autographs is tough to find in this day and age. SPA takes the concept above and beyond with duals, triples and quad hard signed autos, something that is not found very often outside Exquisite collection. However, unlike Exquisite, SPA can be purchased at price that makes it affordable for every collector, which means they get a taste of the high end with every box. Not only that, but it adds a certain element to each card, knowing that your favorite players actually touched and signed the card you just pulled. Plus, who can deny how awesome on card sigs look when showing off your collection?

When it comes down to it, it can be difficult to live up to such a high standard each year; but over the last decade, SPA has never fallen short. It’s the reason why release day is always such an exciting time for me, and 2010 is no exception.