We’ve had our share of haircut cards in past Brag Photos, but this one is especially unique: 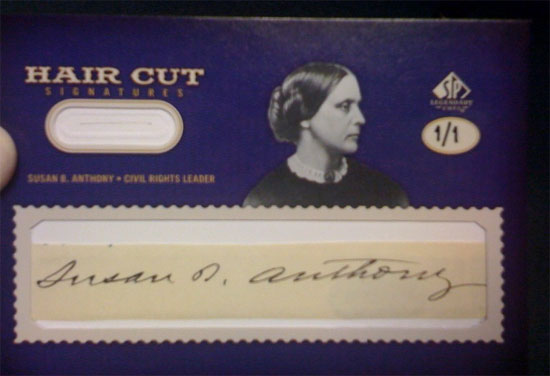 For starters, we’re talking about an authenticated strand of hair and signature from the most prominent advocate of the women’s suffrage movement through the 1800s.

Another unique aspect of this item is its size, which is notably bigger than your standard trading card. Her signature was often rather large, and once we found a quality one, we decided to just make the card itself bigger to accommodate it.

This card is of course a part of Upper Deck’s 2009 SP Legendary Cuts Baseball “Hair Cut Signature” series, and we’ve featured similar 1-of-1 gems here before (like Richard Nixon and John Adams). Talk about a big pull: these make a great historical centerpiece for any collection, and go for thousands of dollars on the secondary market.

Sad to say, you’ll have to pass on pulling this Susan B. Anthony card: it was recently completed and will be sent to the lucky collector who pulled it this week. That individual will get to brag next, though there’s always plenty of gems like these out there in Upper Deck packs, waiting to be claimed.