I have always referred to Exquisite Collection as “the granddaddy of them all,” when it comes to super-premium products. It is often imitated, never duplicated despite many tries. Exquisite Collection is one of the only products in its price bracket to feature completely hard-signed signatures for all of its autograph cards, and this coming year’s set looks to be no exception.

Because Exquisite Collection has become such a favorite among collectors, I wanted to take a look back at its run from 2005-2009 and put together a retrospective. You don’t know where you are going until you know where you have been, right? 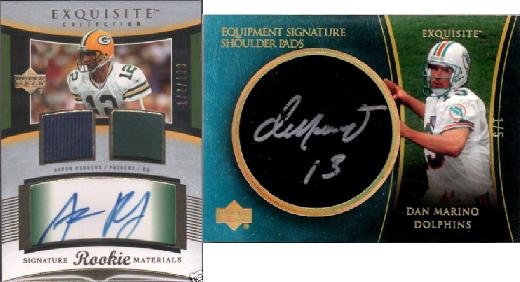 This set is widely remembered for being the first of its kind in football. The rookie cards are rare and tough to come by, and with so many rookie cards featuring elite players, it is a very valuable beginning to the Exquisite Football brand. The staples of Exquisite, the rookie auto-patch cards, are here featured with dual swatches for the only time in the brand’s history. In tother subsets of the product, signed memorabilia was a focus and are some of the most sought after modern cards in history. My personal favorite was the signed helmet-and-shoulder-pad cards, a concept that has yet to be repeated anywhere in the hobby. 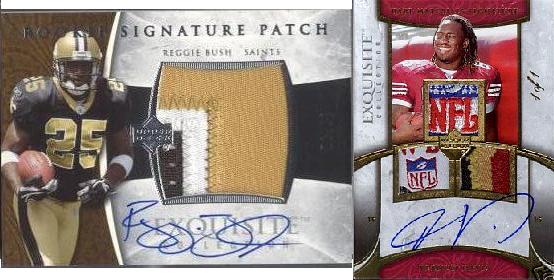 2006 had the help of one of the biggest hype clouds of any draft class I have ever experienced. Each player drafted in the first round was destined to be hall of fame bound, and the prices of the Exquisite cards upon release reflected that completely. The rookie auto-patches started using humongous patch swatches while still maintaining a great design and look, while the rest of the set became more indicative of the cards we are accustomed to now. For the first time, Exquisite collectors hunted for “gold boxes,” where each card in the 7-card pack was a 1-of-1. There was also the introduction of single-, dual-, and quad-NFL logo cards, which are still heralded today as some of the best ever produced. Though some of the rookies may not have filled the shoes they were supposed to have, the values on this set remain very high regardless.

When March of 2008 rolled around and Exquisite hit shelves, people clamored for their shot at a big hit in a draft class that had been one of the best in years. Adrian Peterson had put up monster numbers in his first season, and his Exquisite cards were expected to be some of the most expensive non-1-of-1 cards in a long time. All of the favorite features of the 2006 cards were back, including the dual- and quad-logo cards that were the chases of the previous set. My favorite cards in this set were probably the newly designed, rare-materials cards, which featured up to three NFL logo patches coupled with a hard-signed autograph. These cards were part of the gold boxes that again made their appearance, and many collectors broke double-digits worth of cases to pull one. Even today, the Adrian Peterson Rookie auto patch sells for over $1,200, and I don’t see the price coming down any time soon.

If I had one word to describe 2008 Exquisite, it would be “regal.” An ornate design graced the cards of a great draft class, which featured some of the biggest and craziest patches of all time. This time, it wasn’t just 7 cards per box, as a new “gold pack” was created to bring extra value to each box. This new pack was filled with all kinds of amazing cards, including hard-signed autographs on each card. There were also new concepts from favorite sets like rare materials, which turned into a subset that many collectors tried to complete. Instead of just one card per player, these cards now were numbered to 50 and 10, creating a feeding frenzy for the people who were going for the set. There were still single- and dual-logo cards for people to chase, and many of them are still out there. The biggest addition to Exquisite was Tiger Woods, who had his first Exquisite card inserted into the packs. These cards were expected to top $10K in value, and some garnered even more.

Over the last few weeks, we have gotten our first taste of what 2009 Exquisite is going to be all about. All the favorite cards are back including the dual- and quad-logos, as well as some new ones that should be utterly ridiculous. Now, there is a possibility of pulling hinged cards out of this year’s product, some with multiple autos from multiple players. Signed swatches are making their return, as well as the gold packs that people loved so much in the last set. A new focus of this set is the inscription cards which are looking to make a big splash. Instead of a plain auto, many of the cards will feature any number of inscriptions from both rookies and veteran stars. With Mark Sanchez and Percy Harvin making it all the way to the conference championship games this season, it may be one of the most valuable draft classes ever. Look for Exquisite Collection soon!

I’m beyond excited for one of my favorite products of the year, and I can definitely say that it looks more packed with content than ever. The design looks great this time around, and we haven’t even seen the full extent.