It’s rare that a force as great as Ndamukong Suh arises in a college setting, even more so in the way he did. During his time at Nebraska, he solidified himself as one of the greatest defensive line prospects ever, and that has translated into some huge buzz for the upcoming NFL combine and draft. As of recent mock drafts, Suh is slated to go either to the Rams at number one, or to the Lions at number two, meaning that he will be terrorizing players from his first day in the league. Both teams are in desperate need of some defensive help, and Suh will be a great player to fill that hole.

After the 2009 NCAA season, Suh took many of the major awards, including the 2009 AP Player of the Year. Although he was a finalist for the Heisman, it’s generally understood that defensive players rarely have a shot at winning. He was also a first team All-American selection, and dominated the Big 12 all year with stellar play. Teams coming to Lincoln almost always had to adjust their game plan to account for Suh, as leaving him alone would almost guarantee a terrible game for the offense. He became known for his speed and strength in getting to the quarterback and ball carrier, even though the Cornhuskers did not have a season to match his accolades.

He is widely regarded as one of the best all around players in the draft, which stems mostly from his size and NFL caliber ability. I think the most impressive thing at this point is that he is known for his elite run stopping power, but racked up 12 sacks in a tough conference despite his dominance in other aspects of play. Mel Kiper Jr, draft guru extraordinaire for ESPN has hailed Suh as one of the best he has ever seen, while others are going even further and saying Suh may be one of the best modern era draft prospects. From what I have seen, I agree: the guy makes me scared for people who play against him. 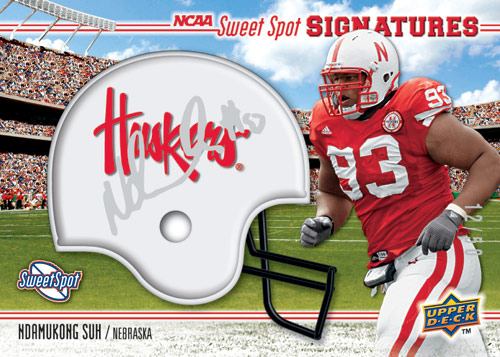 Upper Deck will be making Suh a focus of upcoming products, along with many of the other elite prospects for upcoming releases. 2010 Sweet Spot Football will be back with a new style and a new face, but will still feature aspects that collectors have loved for years. It will feature players like Suh, Tim Tebow, Colt McCoy and others, on hard signed custom helmet cards. Sweet Spot will also debut players like Super Bowl MVP Drew Brees in his Purdue garb, and Hall of Famer Dan Marino in his Pittsburgh uniform for all the collectors out there who follow their favorite schools. 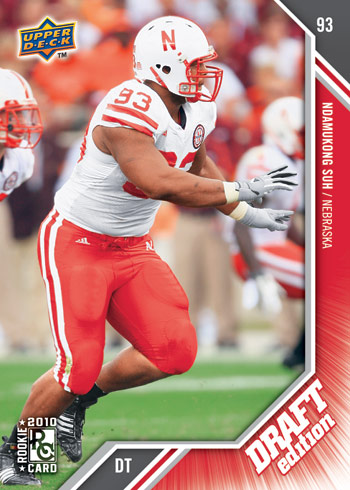 Upper Deck Draft will also be back for its third year, with hard signed cards of all the top prospects and veteran stars. These cards have become immensely popular due to being some of the first cards and autographs of the 2010 season, and you can bet Ndamukong Suh will be one of the top valued cards in the set.