Survive late charge by Team Canada to win OT thriller 6-5 in another epic performance put on by two of the world’s junior super powers.

Team USA built up a 5-3 lead against the five-time defending champion Team Canada only to have it evaporated in the final three minutes by a game (and top forward as well as tournament MVP) Jordan Eberle, who scored two late clutch goals to send it to overtime. 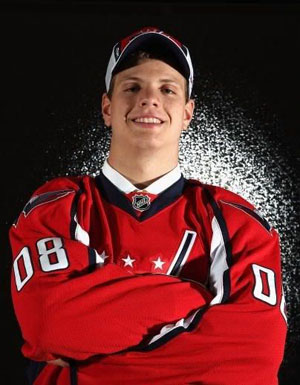 John Carlson (property of the Washington Capitals), made sure that the streak did not continue by rushing down the ice with two teammates on a three-on-one, only to use them as decoys as he beat Canadian goalie Martin Jones (who was forced in after starter Jake Allen was ineffective in the third period) short side for his second goal of the game, this one a gold medal clincher. 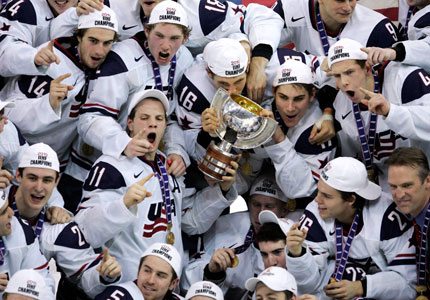 The game itself was wide open, with both teams replacing their starting goaltenders along the way in favor of the back-ups.  Jack Campbell replaced starter Mike Lee after the potential #1-overall pick in the 2010 NHL Entry Draft Taylor Hall put one by him.

Hall did nothing to hurt his stock in the upcoming draft.  If nothing else, he solidified his number-one ranking with a strong performance.  At times he dominated and never backed down from big situations.  A player who loves the puck on his stick to either make a play for himself or to find an opening for a team mate, Hall seems to have a great balance of set-up, as well as trigger-man, qualities.  He will be a great fit for a team in need of a forward who can put up points.  He now goes back to a Windsor Spitfire team that is loaded with talent to make another run at a second straight Memorial Cup.

By the time the tournament was over, it was an amazing showing for Campbell who did nothing but increase his own draft stock after going from probable first rounder to the goalie that stopped 32 hunks of rubber thrown at him while holding the fort for an American squad who won just their second junior championship.  Campbell has probably moved up significantly on many teams draft boards with not only his overall play, but his intangibles as well.  Teaching a kid “big-game experience” isn’t something you can do; you either have been there or you have not.  Coming into a pressure-packed scenario as he did, with more than 13, 000 opposing fans chanting your name in a mocking style to try and get you off your game, Campbell showed his mettle. Goalies always seem to get love within the hockey card market, and with a performance like this, he has certainly found some new collectors.
While watching the overtime period, I came to realize one thing very quickly.  Both teams were out there to win the game.  Up and down the ice on odd-man rushes they seemed to go before Carlson eventually put in the winner.  Full marks go out to both teams for playing to win rather than playing not to lose.  The game was very entertaining, if a stark reminder that these are kids who do make mistakes.

Defensemen usually don’t make for hobby heroes, but performances like John Carlson’s will make for a cult-like following as his career in the NHL starts.  Expect some solid movement on his key rookie cards once he makes his debut; playing with the likes of Alexander Ovechkin, Alexander Semin, Mike Green, Semen Varlamov and Nicklas Backstrom won’t hurt his chances at producing numbers either.  Look for John Carlson RC’s to be a solid pull and buy when they come available. 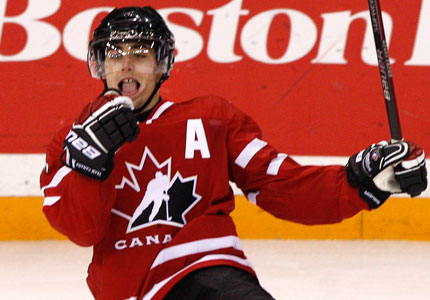 Jordan Eberle has set himself up to be one of the highest-profile rookies once he makes his debut.  Playing in a Canadian city (property of the Edmonton Oilers), and being one of the biggest clutch players in his age group, with skill to burn, will make many a collector pumped to see his name.  We got a glimpse of his abilities in last year’s World Juniors when he scored with 5.4 seconds left in the semifinals against Russia to tie the game, which Canada eventually won, and then scored the shootout winner against Sweden in the finals.  His two goals in the last three minutes of play to tie up the game last night had many of the announcers (radio and television) wondering what the kid might be able to do for an encore.  Ultimately, the heroics ended there, and on this night the better team won the game.  Rookie cards of Eberle should be near the top of the pack for desired pulls.  They will probably also fetch good coin on the secondary market.

Coming into the tournament, not many of the so-called experts gave USA much of a chance at going far.  They had a young team that seemed to be gearing up for the 2011 tournament that will be played on home soil in Buffalo, NY.  After a bit of adversity at the start of the tournament, the American squad seemed to get better and better throughout the tournament using team speed and gritty play to outmatch their opponents.  The New Year’s Eve game to close out round-robin play showed that they could compete with the mighty Canadian squad, and one could argue that they were the better team that night, having outplayed their northern neighbors for the first two-and-a-half periods.  Wins against Finland and Sweden set up the re-match with the Canadians, and this time they didn’t let their opportunity pass them.  With many players eligible to make a comeback next year on home soil, it is fair to say that this American team has to be the favorite for gold again next year.  The only thing harder then getting the gold, may well be defending it when everyone is gunning for you.

A quick look at the tournament All Star team may provide a bit of a look at the next wave of NHL Superstar as well. 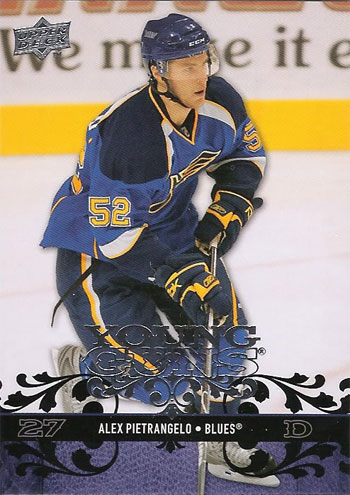 Each year this tournament provides us with a glimpse of the future, and this year was no different.  Based on how this tournament went, and in particular the excitement of the two games that USA and Canada played against one another, the future for the hobby looks pretty good.  I think in the coming few years, we will see many highly-touted “Young Guns” make an impact in the hobby.