When the Chicago Bulls selected Joakim Noah as the #9 overall pick in the ’07 NBA Draft, they thought that they had found a dominating 6’11, shot blocking center with energy that rivals the Energizer bunny.  During his first two seasons, what they got was an underachieving player who had career totals of 6.7 ppg and 6.6 rebounds; he was well on his way towards becoming one of the biggest draft busts of the decade.  All of that has changed since Noah hit the weight room this past offseason, and he’s now started to live up to the hype of being a lottery pick, a two-time NCAA Champion, and the Most Outstanding Player of the ’06 Final Four. 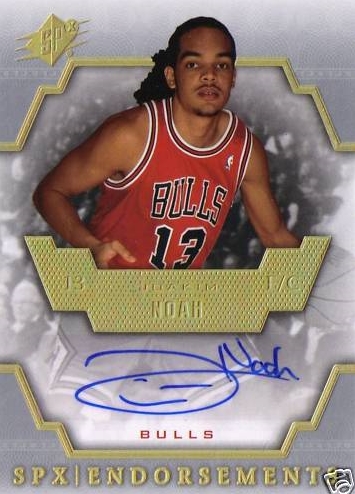 This season, Noah has averages of 11 ppg, 12.2 rebs, and 1.6 blocks which ranks him among the Top 5 in rebounds and blocked shots for most of the season.  He credits his recent success to growing up a bit and committing himself to getting in prime shape by hitting the weights hard: he’s added 15 lbs of muscle since last season to be able to compete with the bigger front-court players in the NBA.

Noah admits that he has always been an emotional player, but understands that it has been a learning experience to better control those emotions.  Instead of exploding after every bad call, he now lets it all out after every successful play he or his teammates accomplish on the court.  Whatever the methods, it has definitely worked with Noah also being among the league leaders in double-doubles with 15.  More impressive is that he has had 23 of 31 games this season in double figures in boards and has already had 4 games of 20+ rebounds.

While he still struggles at times with his offensive game, he is one of the better big men in the league at finishing the pick and roll, which was a mainstay of the Florida Gators in college.  Even though he gets most of his points off of offensive put-backs, his scoring average has gone up from 6.7 to 11 ppg this season.  Part of his deficiencies on offense has been an ugly jump shot, which he continues to work at.  He has a sideways roll off of his hands which is visible on his free throws, which is another area of improvement.  He has gone from a less than spectacular .684 % in his first two seasons to a more respectable .740% this season.

With the Bulls struggling with a sub .500 record (16-20), they are likely to blow up their roster with the exception of a few select players that they can build around.  Because of Noah’s outstanding play this season, he most certainly will be a part of the Bulls rebuilding efforts along with Derrick Rose and Taj Gibson.

At age 24, Noah definitely has a bright future ahead of himself as one of the most talented rebounders and shot blockers around.  Hopefully he can develop his offensive game to match his defensive prowess.  It may be a stretch, but Joakim could become the modern day Dennis Rodman: a rebounding demon with an abundance of energy and emotion which is always evident on the basketball court.

Let’s just hope that he learns how to control those emotions a bit better than “The Worm.”