As NHL teams amp up for the Olympic break (playing three to four games a week), the Olympic roster freeze looms large.  February 12th at midnight marks the start of the roster freeze, and Ilya Kovalchuk and his situation with the Atlanta Thrashers is making management and fans uneasy. Kovalchuk is set to become an unrestricted free agent at years’ end, and would certainly be the hottest commodity available. How Atlanta Thrasher management deals with this player will define them as a franchise. It will play a large role in Kovalchuk’s place in the hobby as well. 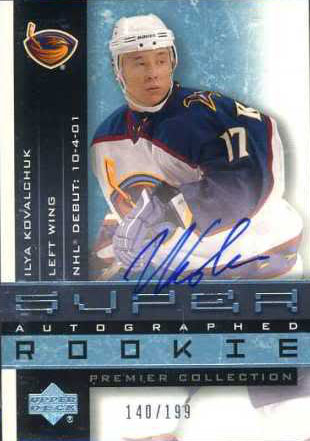 A quick look into the stats for Kovalchuk shows that he has 327 goals, much of which has been accomplished without a legitimate centre man.  219 of these goals have come since the lockout ended. He has won a Rocket Richard Trophy in 2003-04, played in three All-Star games, and is on pace to reach the 50 goal plateau for the third time in his career. He is seemingly the second most dynamic goal scorer in the game today behind only Alexander Ovechkin.

The Olympic roster freeze lasts until February 28, and then just a few days later on March 3, the NHL trade deadline comes. Ilya seems to be looking for big money, and a lot of years on the agreement. Does Atlanta have the $80-100 million that he is looking for, over the course of the next ten to twelve years? Not sure, but my guess is they don’t. In this case, the question becomes: “When is the right time to move him?” 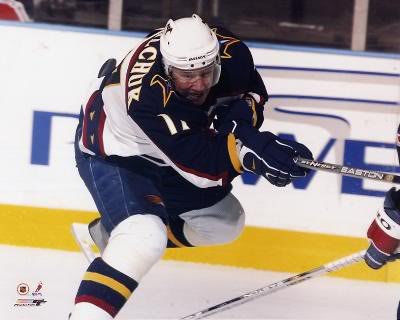 Scenario One: Kovalchuk gets moved before the Olympic break.

I personally don’t see this happening at this stage, as prospective teams won’t want to pay him for a couple of weeks without them helping the team.  Kovalchuk is one of the key components of a high-flying and dangerous Russian team at the Olympics in Vancouver; teams are not going to take the chance of acquiring a player that might very well get hurt in the games and not be able to help them down the stretch. The asking price will be quite high, and that is certainly not worth the risk.

Scenario Two: Kovalchuk gets moved before the Trade Deadline, but after the Olympic Break.

This seems to be the most logical decision if they cannot come to an agreement on a contract discussion.  I personally can’t see a general manager leaving this to chance and potentially allowing a team to sign him without getting anything in return, but that scenario isn’t out of the question. The asking price will be high. Probably in the neighborhood of an NHL ready player, probably a young player with upside. Also on the want list will be blue chip prospects and a draft pick package that will have to include at least one first round pick. This seems to be a decent option if you can get exactly what you are looking for, but the main problem is this: none of these things are Ilya Kovalchuk.

Teams that seemingly are in the hunt for Kovalchuk’s services at this point appear to be the Los Angeles Kings (who have a long list of high level prospects and quality young players that might be necessary to swing a deal), and the Boston Bruins (who have assembled a good cast of draft picks, mostly from the Phil Kessel deal swung with the Toronto Maple Leafs in the offseason). The Vancouver Canucks, Chicago Blackhawks and Philadelphia Flyers are also interested.  Don’t be surprised if you end up seeing the New York Rangers become a player as well.  Kovalchuk playing in any of these markets would most certainly be a boon for his collectability in a much more prominent hockey market.

Scenario Three: Atlanta holds onto Kovalchuk in hopes of a playoff run, trade his rights before he officially hits the market on July 1.

As of today, Atlanta is in the thick of the playoff race with 54 points in 52 games.  They are but a single point out of the last playoff spot. But the problem is this: parity. While they are but a single point out of 6th place (in the playoffs) they are also a point away from being in 13th place as well. A lot of teams are in the same boat, many of which will seemingly be buyers at the deadline looking to acquire talent. Will hanging onto Kovalchuk be enough to get them into the playoffs when other teams around them are looking to improve? If I had the answer to this, I would probably be collecting a paycheck from an NHL team. It would certainly be a gamble that the Atlanta Thrasher brain trust will have to weigh options on. Chances are good that if you wait until the end of June to trade Kovy’s rights, you won’t get the same return as you would if you move him before the trade deadline.

Scenario Four: Thrashers are able to re-sign Kovalchuck before the trade deadline.

At this point, this seems to be the least possible scenario. Kovalchuk and his representatives have given the Thrasher management a number they are looking for, and Thrasher management has given Kovalchuk’s camp a number they are looking for.  These are seemingly miles apart, or else they would have already come to an agreement.  At this point, this scenario is but a pipe dream, especially for Thrasher fans (who currently rank 28th of 30 teams in average attendance).

Scenario Five: Thrashers let Kovalchuk go to free agency and are able to re-sign him at that point. 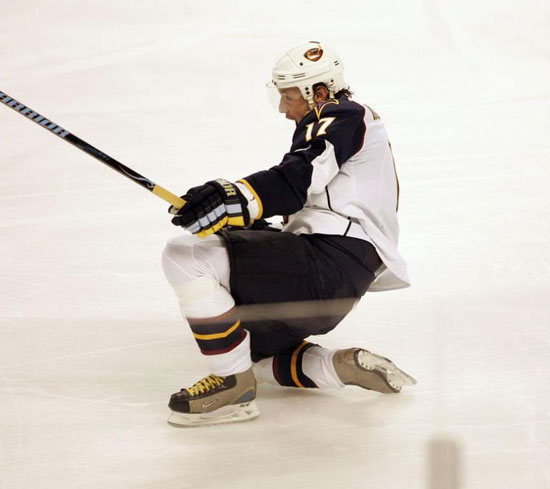 At this point this might be the best chance (although very slim) at the Thrashers keeping Kovalchuk long term.  I say that because you have to think that someone will give Kovalchuk the big money he wants; if not for the years he wants, at least the opportunity to make big money for a good chunk of years.  Atlanta has to hope they have a better feel on the market then that of Kovalchuk and his handlers.  If they do, they might be able to say to him, “As we have said all along, our offer is the best one you are going to get, and why don’t we just get this done now.  You had your fun looking, but this is where you belong.” It would certainly be a gamble, not one I am sure would go over well with fans, and would take stones of steel from management.  It could happen, though it’s unlikely.

What happens with Ilya Kovalchuk will have a direct impact on his hobby appeal as well.  As one of the legitimate superstars in the league today, his pulls are still very attractive. If he were to move to a big market like Los Angeles or New York, you would expect to see much more activity on the secondary market for his cards. The same applies if he were to go to an original six team like Boston or Chicago: the fans would start to pick up his items at an alarming rate.

Where he goes is certain to have an impact on his collectibility. The process he goes through will have an impact as well: will he just be a rental player, will the team that trades for him be able to sign him long term, or will he hit the open market? For these reasons, over the next few weeks through the Olympic break, no NHL player will attract more attention.


Very nice read Chris. One of the best hockey related blogs I have seen in while! Also i hear there is a chance he may return to Russia?
Would you consider that another Scenario?