Peyton Manning never needs an introduction, especially now that he holds the NFL record for MVPs won. After recently winning his fourth regular season MVP, he tops a list that includes Walter Payton, Joe Montana, Tom Brady, and more. He captured 39 percent of the vote in a season that included a record number of 4,000 yard passers with 30 TDs or more, a 2,000 yard rusher, and a player who covered year long for his NFL return after retirement. Despite all of those great seasons, Peyton reigns supreme again.

Funny enough, coming into the 2009 season, Manning wasn’t necessarily the odds-on favorite to have a good year. He had a brand new coach after legendary Tony Dungy retired, he was without Marvin Harrison for the first time in a decade, and the rest of the team was young and inexperienced. Two constants remained in Joseph Addai and Reggie Wayne, and both were poised to take over the NFL with Manning behind them. However, three pieces does not a football team make, which came into play when players like Austin Collie and Pierre Garcon stepped up to fill the roles needed for a winning team.

Like many of the great quarterbacks who have come and gone, Manning makes people around him that much better. He made stars out of his new role players and made his past role players into new league leaders and Pro Bowlers. That wasn’t all, however, as the Colts started the year 14-0 thanks to Manning’s amazing play, a feat that earned him initial consideration for league MVP. What put him over the top were his 4,500 passing yards, 33 touchdowns and leadership that emanated from his pores. Numbers like Manning’s make the Colts’ finish pretty easy to fathom when reviewing the final stat sheet.

Yet, not all is said and done quite yet: the Colts still have an opponent in Baltimore this week that could spell defeat in Manningville, USA. Coming off a huge victory in New England, the Ravens have started to show how fearsome their team can be, even against a juggernaut that spent the last two weeks of the season resting up. Veteran Ray Lewis and sophomore Ray Rice lead the menacing defense and high-powered offense into Indianapolis, and it may be a test of what the MVP can do to overcome a team like Baltimore. Last year, many of the bye teams were not able to stave off the surging Wild Card winners, and with those two weeks of rest under his belt, Manning may have issues finding a true rhythm. However, if the regular season is any indication of what will happen, Manning will have no trouble at all.

Rather than going through the must-have cards of Manning’s long career, I want to discuss a few newer cards that caught my eye. His cards are usually so iconic that to list off his SP Authentic rookie, his first Exquisite autograph, and any of his extremely valuable 1/1s would be too easy. Here are a few you may have missed that I find incredibly interesting. 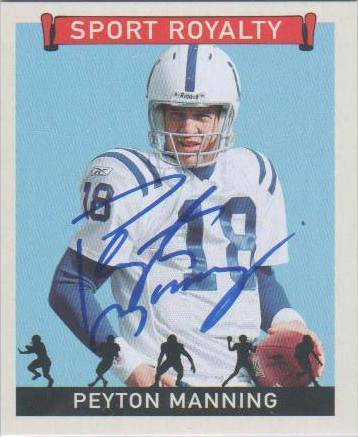 First, out of 2007 Goudey Baseball, Manning was featured as part of the highly collected and highly valuable Sports Royalty set. The card has an on-card autograph and is wonderfully reminiscent of the baseball cards they were modeled after. It’s rare that you see a football player in a baseball set, but this works well. Manning is definitely sports royalty, and this card is a great addition to your Manning collection that has everything. 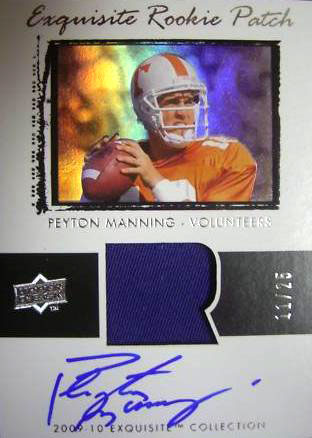 Manning was also a part of the ‘09-‘10 Exquisite Basketball Retro Rookie Patch Autograph set, and seeing him with that type of card is awesome. The ‘03-‘04 Exquisite Basketball set is iconic on its own thanks to the likes of LeBron James and Dwayne Wade, but to see some football players and baseball players make their rookie patch debut is something to behold. Because of the iconic nature and rarity of the set, these cards go for a ton, but that doesn’t mean they aren’t worth a look. Exquisite Basketball may not be back for the foreseeable future, so this is a great sendoff to a fan favorite product. 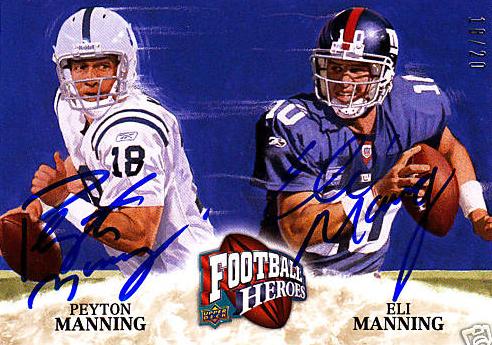 Lastly, I love the Peyton Manning / Eli Manning dual on-card autograph out of 2009 Upper Deck Football Heroes. Its one of the only cards that features a hard signed signature of both Manning brothers on the same card, and the painted art makes it one of the better looking Manning cards produced in a long time. If you are a fan of both of the Mannings, this card is a great one to chase.

Although this year was nothing out of the ordinary for a player who seems to scoff at mediocre play, it goes without saying that Peyton is quickly cementing himself as one of the best NFL players of all time. Considering that he is still relatively young and injury free, he may still have years worth of records left in him. Favre may have recently broken Dan Marino’s touchdown record, but the Manning name is the one that I expect to be on that record in the coming years. When you also factor in that he is one of football’s nice guys, with a great ability to laugh at himself, it’s easy to see why collectors and fans love him as much as they do. Then again, how can you hate a guy whose catch-phrase was “CUT THAT MEAT!” for a good two seasons?