Canada & USA Battle It Out for World Junior Supremacy

The Next Hobby Heroes will be born

Tonight in Saskatoon, Team Canada and Team USA will battle it out for the gold medal in the IIHF World Junior Championships.  Game time starts at 8:00pm, and if it is anything like the New Years Eve matchup (which Canada ended up winning 5-4 in a shootout), it will be a barn burner.

Team USA took full advantage of being down a man in the finale of the preliminary games which saw both teams 3-0 after wins against Latvia, Switzerland and the Slovakian teams. In the New Years Eve game, the USA took advantage of numerous Canada giveaways that resulted in two short-handed goals. Canada was able to take advantage while being shorthanded with a goal of there own while down a man. Team USA took a 4-2 lead into the final 10 minutes of the game before two goals in the final half of the third tied up the game. Most Canadians probably thought that they should have been winning when a late goal was disallowed in the end, forcing overtime. Nothing got settled there, so they had to go to a shootout. All three Canadian shooters scored, while only Team USA vet Jordan Schroeder was stopped for Team USA by Canadian goaltender Jake Allan.

The game clearly could have gone either way, but in the end, Canada won and played one less game to get to the finals by beating a surprising Switzerland team in the semifinals (the Swiss upset the Russians to get there). USA had a harder road (but made it look pretty easy), beating Finland in the quarters, and Sweden in the semifinals, setting up another clash of the North American hockey powers.

One question facing Team Canada going into the finals is how they will be able to contain the immense Team USA speed. The Americans seem to be light years ahead of every other team in terms of team speed, and Team Canada lost one of its top shutdown pairing defensemen in Travis Hamonic due to a hit from behind in the semis. Expect Senators 2009 first rounder Jared Cowan (who is a hulking man wall, but was exposed in the New Years Eve game, and didn’t even play in the semis) to get the call to pick up some extra minutes with Brandon McMillan (a natural forward who played a bit of D already in the tournament) taking a few shifts on the back end to help relieve some pressure.

Players to watch in the Finals:

Jordan Eberle (Canada): Jordan has been a big time player who seems to thrive in big games. He scored in the semifinals of last year’s tournament with five seconds left in the game to tie it up and force overtime: Canada eventually won that game in a shootout.  Currently second in tournament scoring and leading the tourney in goals, the Edmonton Oilers First Round Pick from 2008 (22nd Overall) is primed for another big game performance. 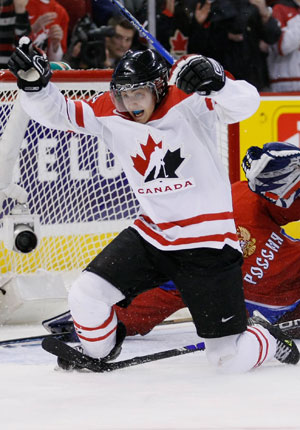 Derek Stepan (USA): Derek currently leads the tournament in scoring and is also the team captain. As a New York Ranger draft pick (51st overall in 2008), this could clearly be his coming out party and set the stage to be one of the next hobby heroes with a potential large following with the Rangers. I see this young man having an impact in the game one way or another.

Taylor Hall (Canada): Taylor has made an impact in the tournament by scoring goals in bunches. He currently has five in the tournament, but all came in two games. Hall has been a force in all the games though, constantly creating scoring chances for himself as well as his teammates. A big game tonight will solidify his hold as the #1 overall pick for the upcoming 2010 NHL Entry draft. Look for the explosive forward to play a role in tonight’s outcome as well.

Jordan Schroeder (USA): One of the key veterans for Team USA, the first round pick of the Vancouver Canucks (22nd Overall in 2009) is an explosive player with tremendous game. He hasn’t had to be “The Man” yet for the Americans as many people thought he would have to be for USA to have a chance to medal. Look for him to step up his game tonight and be a difference maker. Also, being a Canuck Draft Pick, he should be able to get himself a nice hobby following, and along with Cody Hodgson (Vancouver’s 2008 First rounder), lead the next hobby heroes for that market. 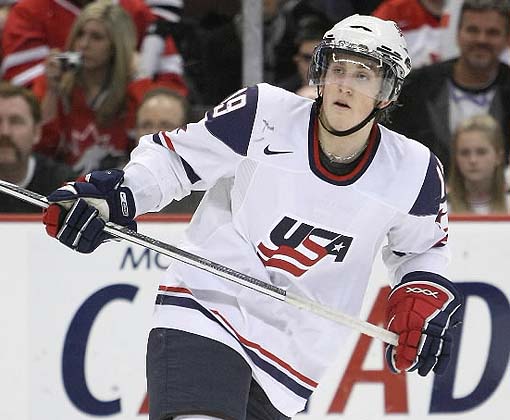 Goaltenders: Jake Allen seems like a lock for Team Canada in the finals. He has two shutouts so far in the tournament, but has not yet given the Canadian squad that aura of invincibility that they are used to having in recent years (see Justin Pogge, Carey Price, Steve Mason among others). He will need to be at his best, as he knows that USA posses a lot of speed, and they know how to finish. In big games like this, goaltending is usually the difference. Mike Lee will probably be in the net to counter Allen. Lee has started both playoff games after youngster Jack Campbell started the New Year’s Eve game stopping 30 pucks in that game. Whoever ends up in the net will have to be a difference maker and be mentally tough.  If the game is close near the end, chances are good that whichever goalie blinks first will end up with a silver medal instead of a gold hanging around their neck.

This is shaping up to be a fantastic battle, and will be a great chance to see some of the top young stars in the game on the biggest stage most of these players have ever been on.  If history is any indication, these young players can take their performances here and translate that to a cult-like a hobby following.

Watch for my next post, where I’ll take a look at the finals and see what the hobby implications for some of the stars might look like. As an aside, I should also mention that Team Sweden and Team Switzerland meet in the bronze medal game. The only way I see Switzerland winning this game is if Sweden decides to pack it in as they thought they would be playing for the gold. We will see if they can get up and take some hardware home in the end.


Nice summation, I hope Jordan Schroeder gets a hat trick in a losing cause being a big Canucks fan!


Wow nice write up man !
I will be back for another great piece of reading!
Can’t wait to see what this guy can do next!
and Go Canada! go!