Now that we’re a little more then halfway through the season, we can note surprises we’ve seen for teams and individuals in the sport. As always, these have a bearing on the collectability of teams and players.

We all have our own collecting habits within the hobby.  Some of us are player collectors, while others go after anything to do with their respective favorite team.  Some of are old fashion set builders; but in looking back on the first half of the season, I won’t focus too much on that at this stage.

In order to find some of the surprises on the team level, all one has to quickly do is look at the standings where they are right now and then take a quick look back at the preseason predictions in your favorite magazine to see which teams are exceeding expectations (think Phoenix Coyotes, Colorado Avalanche, Nashville Predators and the Buffalo Sabres). Of course, there are also teams that seem to be falling below expectations (see Carolina Hurricanes, Toronto Maple Leafs, Detroit Red Wings and Columbus Blue Jackets).

One of the keys to almost all of these teams’ successes and/or failures starts in the net.  Good goaltending keeps you in it.  Just ask Colorado and Phoenix: without their number one goaltenders, they probably wouldn’t be in the positions they are in now. 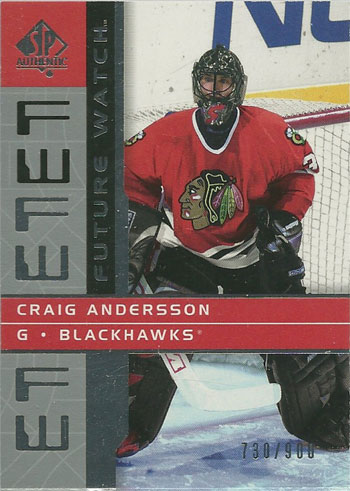 Craig Anderson is turning out to be one of the best off-season signings in the league at this point. Anderson got off to a hot start, and has carried his play to be among the top ten in wins. This has helped Colorado into a playoff spot, and within only one point of the division lead.  If you want to get in on the goods, you should be able to find many of his key rookie cards at relative bargains at this point. The journeyman has bounced around a bit, but seems to have found a home in the mountains of Denver. 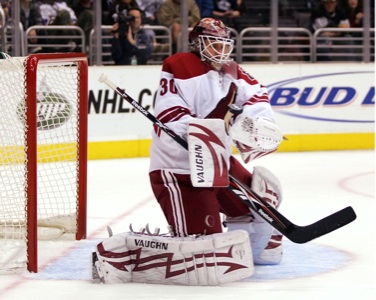 Ilya Bryzgalov in Phoenix also led his team to a very surprising first half.  Sitting at the top of the league in shutouts and in the top five in wins, Bryzgalov has his team currently sitting in a position to host in the first round of the playoffs.  Putting it all together this season has been key for Ilya.  His solid play led the team to many close game victories, and has made up for the lack of scoring overall among the players (Shane Doan leads the team with a mere 28 points in 45 games).  Bryzgalov’s season has earned him a trip to Vancouver to be a part of the very strong Russian squad. 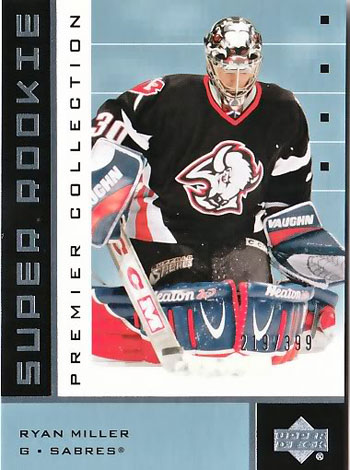 Ryan Miller is another goalie who seems to have figured out how to translate talent and potential into consistency at the highest level.  He looks much more comfortable in the net, and seems to be able to put together a consistent effort each and every night.  His abilities have never really been in question, but he has clearly taken his play to another level this year. He seems to be one of the consensus favorites at this point for the Vezina Trophy (top goalie), and has even entered into the discussion for the Hart Trophy as league MVP.  Miller has also been a steadying influence on his team, and his play has allowed some of their forwards to battle through scoring droughts. 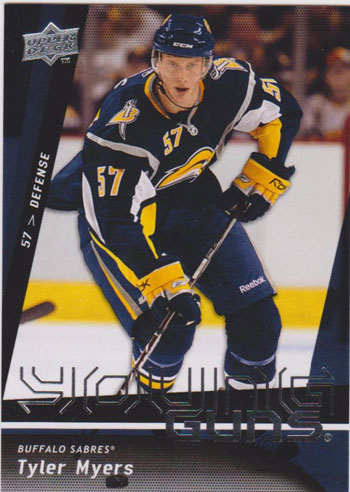 Another big reason for the Sabres success has been the fine play of rookie Tyler Myers.  A man wall of a human standing 6-foot-7 (and only 19 years old), the 2008 first round pick (12th overall) is leading the team in ice time.  His impact in the hobby is still growing, but people are not unhappy with pulling this young stud, who should only get bigger, nastier and stronger in the coming years.  The comparisons to Zdeno Chara may not be that far off.

On the flip side, shaky goaltending has lead to some disappointment this year as well.  One of the most notables is 2008-09 Rookie of the Year Steve Mason.  Mason has struggled to this point in the season, but many believe his makeup will turn this into a learning experience, and he will bounce back. He’s still near the top of the rookie crop from last season and his items are still moving, just not quite at the levels they were at the end of last season and at the start of this season.  His current goals against average of 3.31 ranks third last, and his save percentage is sitting at .890, second worst among qualified goaltenders.  His play is only one part of Columbus’ struggles this year, but it certainly hasn’t provided the steadying influence he provided last year.  I do look for him to bounce back, but I am not sure it will be while Ken Hitchcock is behind the bench.

The Toronto Maple Leafs were not expected to win the Stanley Cup this year by any stretch . . . but when your General Manager proclaims that the team will be in the playoffs, and then goes out and spends money on a rugged defense and brings in a sniper (Phil Kessel), expectations tend to get higher.  I heard yesterday that in half of the games the team has played, they have been behind 2-0.  That is simply not getting key saves. 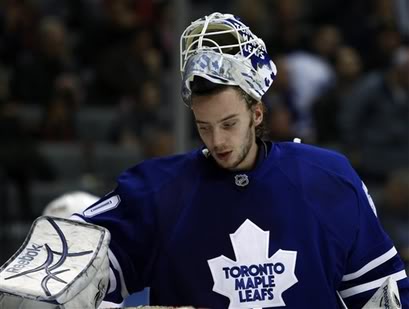 Jonas Gustavsson has been just ok in the net, while Vesa Toskala has been nothing short of brutal.  Gustavsson seems to have a high ceiling both in terms of play and within the hobby, and with a nickname “The Monster”, that is a good thing.  The high profile Maple Leafs have a very dedicated collector base and they seem to be pinning a lot on the youngster at this point. 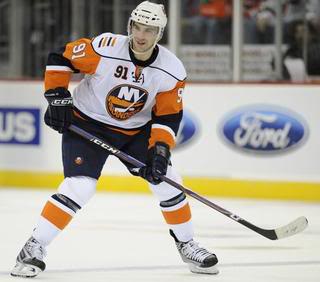 Rookies are always one of the most collected aspects within the hockey community.  I have touched on a couple already in Tyler Myers as well as Jonas Gustavsson, but the king of the rookies this year is clearly John Tavares.  He stands alone at the top of the rookie chain with his appearance coming out of a pack usually followed by a fist pump or a “Right On”.  “JT” leads all rookies in goal scoring as well as in points, and seems primed for a big second half now with his feet wet and a half season under his belt.  His cards should remain hot, especially with some of the first hard signed autographs to come out in the second half of the season.  Look for a lot of movement once products like SPA, and Ultimate come out.  SPx marks the first autographed rookie cards of this year’s season, so those should see a lot of action on the secondary market as well. 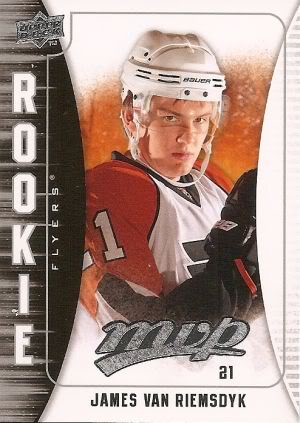 Second overall pick in 2007, James van Reimsdyk has not let his debut season go to waste either.  “JVR”, is a big kid with big skills.  With six points in his past three games, and only two points behind Tavares for the rookie lead, James also appears to be setting the tone for the second half of the season.  Playing in Philadelphia should help his collectability: he has been on our radar for years, so it is great to see him making an impact, both on the ice and in the hobby.

Other rookies making an impact on their respect teams at this stage include Matt Duchene, Ryan O’Reilly and T.J. Galiardi in Colorado, Victor Hedman in Tampa Bay, as well as Evander Kane in Atlanta. 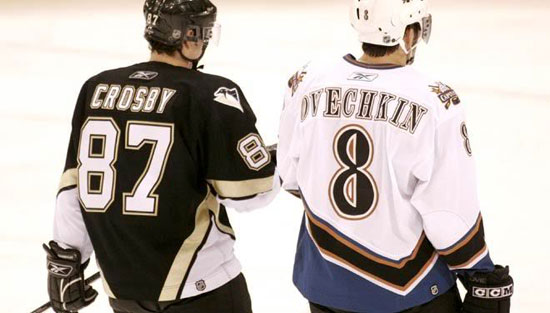 Offensive and hobby superstars Alexander Ovechkin (who has recently been named team captain in Washington), and Sidney Crosby (who recently won the Lou Marsh award as Canada’s top athlete), continue their solid play and retain their thrones as the hobby superstars.  Never a bad pull and recognized by even the casual hockey fan and collector, they continue to lead the hobby along with the season’s top rookies.

A couple of nice surprises at this point in the season include Henrik Sedin currently leading the NHL in points. Some doubters previously thought he could only perform with his brother Daniel, but now his play has people wondering how far ahead he might be if Daniel wasn’t injured for a significant amount of time earlier in the season.  His 61 points set him three clear of any other player at this point.

Marian Gaborik is also a nice surprise: the former Minnesota Wild third overall pick has stayed relatively healthy this year and is leading the league in goals scored.  Good thing too, as the New York Rangers have really struggled putting the puck in the net, and without signing him, it’s safe to say they’d be much lower in the standings.

Other key offseason moves that have resulted in quality results have Dany Heatley paired with Joe Thronton and Patrick Marleau to form arguably the most potent line in the NHL right now, with all three being selected to Canada’s 2010 Olympic roster because of the chemistry they bring each night.  Another key move was one that was actually not made, as the Chicago Blackhawks did not resign Nikolai Khabibulin (who signed with Edmonton and has battled injuries). Instead, Cristobal Huet be the number one goalie, and has combined with rookie Antti Niemi for seven shutouts to this point in the season. They are currently sitting number one overall in the league.

As the season gears up for the Olympic break, trade deadline, as well as the final playoff push, there is a lot to look forward to.  I expect some big time player movement this year, as some teams are desperate to make the playoffs. While others look for that one last piece to make them a championship team, others will look to the future.

In the hobby, we as collectors can look forward to some of the higher end releases to come, which should keep us all busy as we track down the cards that we look to add to our collections. This time of year can be really fun both on the ice, and in the hobby shop!