Per NFL.com, Percy Harvin will be named offensive Rookie of the Year for the 2009 season. Much like yesterday’s announcement of Brian Cushing’s award, Harvin was also expected to walk away with top honors, so there were no surprises when the award was determined. He has truly been one of the more important additions to a team that desperately needed some receiver help, and thanks to Brett Favre’s tutelage, he has exceeded expectations to the fullest.

Without question, Harvin had some demons coming out of college, and was not expected to be a top pick once the draft rolled around. He tested positive for a banned substance at the combine, which led teams to drop him on their boards out of fear for repeat abuses. Vikings coach Brad Childress visited him in Florida before the draft, and became determined to have him on his team. The Vikings drafted him at number 22, and the rest is history.

This year, Harvin caught 60 passes for 750 yards with six touchdowns, including over 125 yards on the ground as well. He also returned two kickoffs for touchdowns, leading him to a season average of 27 yards per return that put him at number two all time for the Vikings. He was recently named to the Pro Bowl as the NFC’s kick returner, being the only offensive rookie to earn his way onto the team.

For Vikings collectors like me, it’s become tougher to collect Harvin’s stuff because his value has spiked so much due to his production. Considering that the Purple already have a large fan base, it also creates a lot of competition among people who want his cards. I have done pretty well, regardless of the other collectors, and here are a few of my favorites for the year. 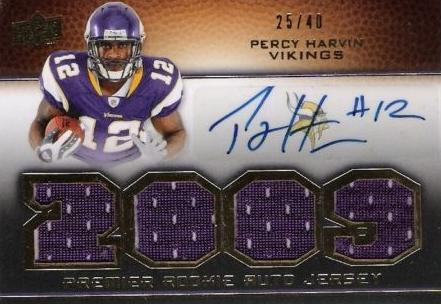 When 2009 Upper Deck football came out early in the year, I was immediately excited for the chance to pull the Premier cards seeded at one per case. Harvin’s card is absolutely amazing, and still one of the most valuable cards of the year so far. It is also extremely rare at forty copies, which makes one of the rarest of the year as well. The card features an autograph, four swatches of player worn jersey, and a great design that fits well with the awesome picture. 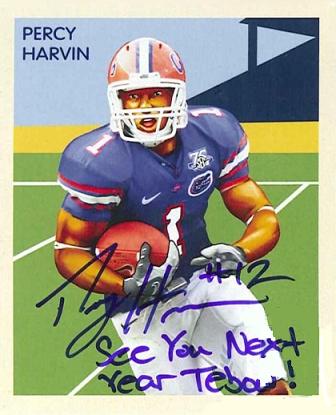 I also love his National Chicle mini out of 2009 Philadelphia, as the painted look of the card is beyond awesome. If you are fortunate enough to get an autographed parallel, I envy you very much. The auto versions are hard signed by Percy on the card, and he has even included some creative inscriptions like “Wildcat” and “See you next year Tebow!” on a few selected ones. 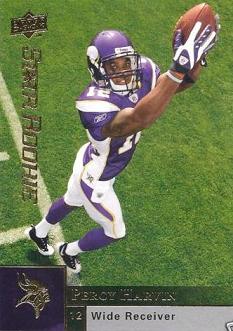 Lastly, I would check out his rookie card out of 2009 Upper Deck, as it is one of the better pictures of the year. It is shot from an angle that you don’t usually see on a card, which is why this card looks so awesome. When the set was first released, I immediately jumped on this card, as I was enthralled by the way it looks. It may not feature an autograph or a jersey swatch, but it is still one of my favorite cards of the entire year.

If this year is any indication, Percy Harvin will be a star in the NFL for years to come. I was skeptical at first about him wearing a Vikings uniform, but he has earned my respect without a doubt. He plays each down with ferocious tenacity, punishing defenders who try to stop him at every turn. Teammate Adrian Peterson has already dubbed him “Little Phenom” for his ability on the field, though I don’t think Peterson is even prepared for the potential Harvin has. Peterson was named Rookie of the Year in 2007 himself, and I would think he has a pretty good grasp of what it takes to be successful. Fortunately for Vikings fans like me, we are going to get to see what he is talking about for many more seasons to come.