Per a number of league sources, Brian Cushing has been named the defensive Rookie of the Year for the 2009 season (an award he was expected to win). He becomes the seventh linebacker in a row to win it, with Jerod Mayo winning last year and Patrick Willis in 2007. Cushing was absolutely ridiculous for the Texans this season, racking up an AFC leading 135 tackles, five sacks and four interceptions, proving he is definitely worthy of the honor.

He is also the second Texans player to win it since 2006, when DeMeco Ryans was the honoree after a similar season. Cushing has been flying around the ball all year, putting up stats usually reserved for players like Ray Lewis and Brian Urlacher. He was also recently named to the AFC Pro Bowl team, something that doesn’t usually happen for rookies in this league. Aside from Jarius Byrd of the Buffalo Bills (also a Rookie of the Year contender), he was the only first year player to be named.

Although Cushing’s cards have not brought the same value as some of the quarterbacks and receivers this year, collectors have embraced his potential head on. His cards have been some of the most valuable from the defensive side of the ball, and should be for a long time to come. Cushing did not attend the NFL rookie premiere, but has many cards and autographs I would definitely take a look at regardless if you are a USC team collector, or a Texans fan. 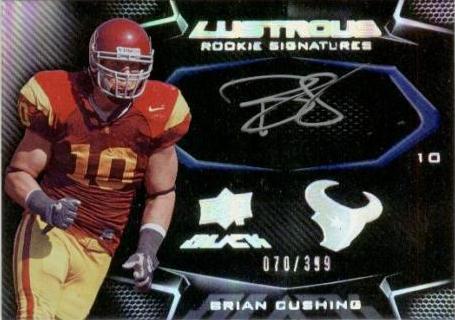 The first I would go after is his recent rookie autograph out of 2009 UD Black. The card is hard signed by the player and looks absolutely stunning. Cushing is pictured in his USC jersey, which should make this card even more attractive to the many people out there who chase players from the Linebacker factory in Southern California. 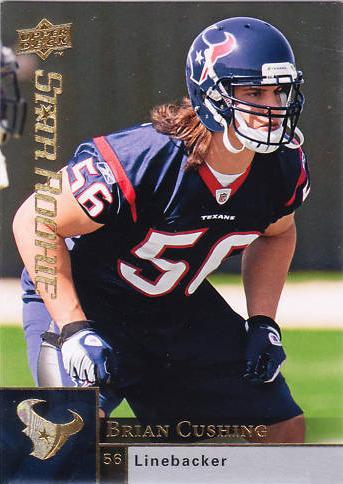 Secondly, his rookie card out of 2009 Upper Deck is a perfect one to go after if you are looking for Cushing in his Texans jersey. The picture is exactly what I would expect from a guy like him, mainly his look of focused and frightening execution. 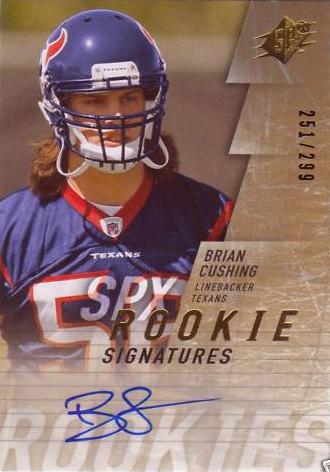 Lastly, I would not hesitate to pick up his rookie autograph out of 2009 SPx, as it will surely be one of the more expensive ones as time moves on. SPx has long been known for its rookie card checklist, and Cushing’s card does not disappoint. It is both serial numbered and rare, and features him again in his Texans uniform. It won’t cost you more than the price of a DVD, which is why it is an affordable way to get in on the ground floor for a player with tremendous potential.

As a person who appreciates what the Linebackers bring to the team, I can assure you that Cushing has what it takes to be a star for years to come. Teams have already started directing the ball away from him, despite the fact that he was a rookie this year. His size and speed will make it difficult to accomplish that avoidance, and with DeMeco Ryans playing along side him, this will not be the only winning season for the Texans franchise.

Check back for further announcements on the NFL regular season awards, as unlike Major League Baseball, they are usually announced very quickly after the season is done. The MVP and Offensive Rookie of the Year should be tight races, especially with the way certain guys have stepped up or down in the last weeks of the season.