The Math Behind 4th and 2

Some of you might remember me from my preseason preview. I’d be lying if I said I wasn’t rooting for Philadelphia to face New Orleans in the NFC championship game. But, that is not what I’d like to write about here. There is an issue I’d like to discuss: 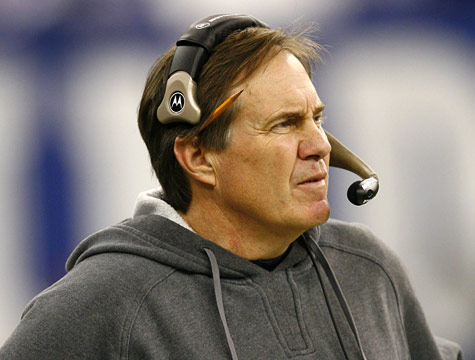 It has become old news at this point, but Bill Belichick’s decision to go for it will eventually be considered one of the turning points in NFL history. Specifically, it will help usher in an age of reason. New England wasn’t certain to win that game if they go for it and succeed, but for now I will assume that if they get the 1st down they win the game. Similarly, Indianapolis isn’t certain to win if they score a touchdown, but I will assume they win if they score. With those simplifications, here is the math:

You can find a calculator set up for this here: http://belichick-decision.heroku.com/

I can tell you a few things in this piece: At the time of Belichick’s decision, in-game trading markets implied the following odds of each event:

55% likelihood that the Patriots get the 1st down.

64% likelihood that the Colts score if the Patriots fail to get the 1st down.

36% likelihood that the Colts score if the Patriots punt the ball.

Based on these numbers, the Patriots’ chance of winning increased from ~64% with a punt to ~71% if they went for it.  When the Patriots’ offense returned to the field, the Colts fans went from jubilant to scared. Perhaps they intuitively knew what the markets already understood.  The New York Times Fifth Down Blog estimated the Patriots’ chances of winning at 70% if punting and 79% if going for it.

Either way the decision was not merely correct, but obviously so. It isn’t close.  Every time a coach makes the conservative choice to punt in a similar situation, that coach is hurting his team’s chances of winning. There are some excellent academic publications on the subject of 4th down decisions, and there are high school teams that have taken such analysis to heart. Here is a link to David Romer’s paper on the subject:

I should note that Belichick was an economics major who has at various times shown familiarity with Romer’s work.

Overcoming risk aversion isn’t easy.  A coach in Belichick’s shoes must not only risk that his team fails to convert on fourth down, but that the media will portray him as stupid.  Educated fans understand that every coach’s decision, not just fourth-and-short late-game situations, involve risk/reward calculations.  The people who ridiculed Belichick’s decision as detrimental to his team (I’m looking at you Mr. King) are egregiously wrong. There are a lot of things to condemn Belichick for in that game, specifically his misuse of time outs, but that most-criticized decision was correct.

There are a few other issues where risk aversion obviously hurts football teams. I think teams are starting to realize that kicking a 20 yard field goal (or shorter) is strictly worse than attempting to score a touchdown. There are late game exceptions, but for the most part you score more points on average by going for a touchdown and you give your opponent worse field position on average.

Some other quick hits:

Oddly enough the Giants should have gone for 2 when they scored a late touchdown against the Eagles. If they succeed, they next touchdown wins for them. If not, they can still go for 2 on the next touchdown to send the game to overtime. Assuming overtime is a 50-50 proposition, and remembering that the decision only matters if the Giants score two touchdowns, the question is which is more likely: The Giants succeeding on the first 2 point conversion attempt, or the Giants failing on 2 attempts? Assuming extra points are 100% (We’ll ignore the fact that the Eagles had already missed an XP attempt earlier in the evening), the break even conversion % of around 38.8%. Obviously teams convert at a much higher rate than that.

16-0 vs. Resting your players: The Patriots did not lose to the Giants because they were tired from going for the record. The Saints and Colts are going to have a bye before their first playoff game, and are going to have another bye if they win their respective championship games. I can’t argue against resting any players who are playing with pain (possibly all of the non-kicking specialists), but I don’t think going for 16-0 hurts a team’s chances of being a Super Bowl champion. Also, I’d like Mercury Morris to shut up. The ‘85 Bears would have destroyed the 1972 Dolphins.

Seth Burn has degrees in economics, accounting, and philosophy. His background is in statistical analysis and game theory. He can often be found covering his eyes at Jets games. If you have any questions or comments they can be directed to his cat Molly via sethburnatgmaildotcom.