If winning free cards isn’t enough motivation to get you to enter the codes from the back of your 2009 Upper Deck rookie cards, there will be an added bonus each week for one participant who guesses the Rookie of the Week. As part of the Own the Rookies promotion, one lucky collector will take home an autographed football signed by all of the top 2009 rookies present at the Rookie Premiere. That means authentic signatures from Mark Sanchez, Matt Stafford, Percy Harvin, and all of the other rookies on one awesome football. To the collectors who picked Mike Wallace this week, you have the chance to win one ridiculously cool prize!

Collectors who successfully guess Upper Deck’s “Rookie of the Week” will be entered into a drawing to win a box of 2009 NFL trading cards. For catching two touchdown passes, as well as the game winner as time expired, Mike Wallace has won this week’s top rookie honor. If you entered codes from Wallace’s cards last week, stay tuned to the website to see if you are a winner!

We have come to the end of another week, and yet again, we have another great performance by a rookie wide receiver. I love it. To have this many standout rookies in one season is great for the NFL, and even better for the people who collect sports cards. It only further solidifies that any rookie someone can pull in a pack has the chance to be a star on the field. If you don’t believe me, look back over the last 15 weeks for proof. There have been rookies from the first round, rookies from the later rounds, quarterbacks, running backs, wide receivers and others. Its been a great season so far, and I don’t see it letting up any time soon.

This week in the closing seconds of the Steelers’ win over the Packers, Mike Wallace became the second rookie to catch a game-winning TD pass. Wallace already caught a long touchdown earlier in the game, and his catch to end it was epic, to say the least. This isn’t the first time Wallace has had late game heroics either, as in week one, Wallace caught a key pass in overtime to set the Steelers up for a game-winning field goal. This time the heroics came in the last seconds, Wallace just barely getting his second foot down in the endzone before tumbling out of bounds. He left the Packers’ defense stunned, but after seeing Wallace play this year, it shouldn’t have come as much of a surprise.

Much like other Upper Deck rookie-of-the-week winners like Mohammed Massaquoi and Louis Murphy, Wallace was drafted later in the third round of the draft, behind almost ten other wide receivers. That hasn’t stopped him from performing at the top of his game, catching five TD passes over the course of the season and averaging 17.9 yards per catch. He has been a great addition as a number three guy behind Hines Ward and Santonio Holmes, playing mostly out of the slot. He was drafted for his speed and hands out of Ole Miss, and that has panned out completely for Pittsburgh. In fact, without his recent catch, Pittsburgh may have had a one-way ticket to sitting in front of the TV in January. 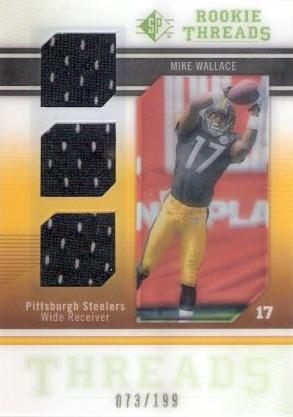 Wallace was also selected to be a part of the 2009 Rookie Premiere, which is the reason he has been featured on a great selection of cards from the year. Wallace’s cards have attained some of the top values of the rookie class due to his production, and this past week should be quite helpful in raising that value past expectations. My favorite card of his so far is the Rookie Threads dual jersey card from this year’s SP Threads set. This one is beyond awesome due to the use of an acetate element in the card, as well as having two player worn swatches and low numbering. The photo of Wallace is extremely dynamic, and it complements the interesting composition of the acetate and swatch parts of the card. 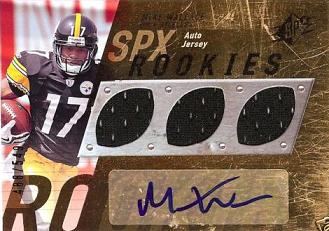 I’m also a big fan of his SPX jersey auto, as it is always one of the more valuable cards of the year. Even with SP Authentic and Ultimate Collection on the horizon, this card will hold its own due to how much collectors embrace the SPX brand, and because the gold background works so well with the Steelers’ team colors. It also has an autograph and three player worn swatches, making this a display-worthy addition to your Wallace collection. 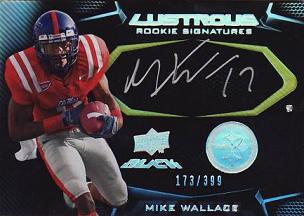 Lastly, for the Ole Miss fans out there, you can’t go wrong with his base autograph out of the recent UD Black release. The card features a hard-signed signature as well as a cool photo of Wallace in his Ole Miss uniform and has been fetching a pretty penny on eBay since its release. The card is pretty low numbered, and rarity almost always drives price more than one would expect. He also has some other amazing cards on the UD Black checklist, and I would not hesitate to check out some of the dual, triple and quadruple autos that feature him and some of the other wide receivers of the 2009 class.

When it comes to 2009, this is the year of the wide receiver, and if everything continues to shape up as it has, there will be one as the rookie of the year. Wallace definitely has a shot, and as a Pittsburgh Steelers, his fan base is huge. These two factors, along with his talent at the position make him a great investment for anyone looking for a late prospecting target. The Steelers may not make the playoffs when all is said and done, however due to Mike Wallace, they at least still have a shot.