If winning free cards isn’t enough of an energizer to get you to enter the codes from the back of your 2009 Upper Deck rookie cards, there will be an added bonus each week for one participant who guesses the Rookie of the Week. As part of the Own the Rookies promotion, one lucky collector will take home an autographed football signed by all of the top 2009 rookies present at the Rookie Premiere. That means authentic signatures from Mark Sanchez, Matt Stafford, Percy Harvin, and all of the other rookies on one awesome football. To the collectors who picked Louis Murphy this week, you have the chance to win one ridiculously cool prize! 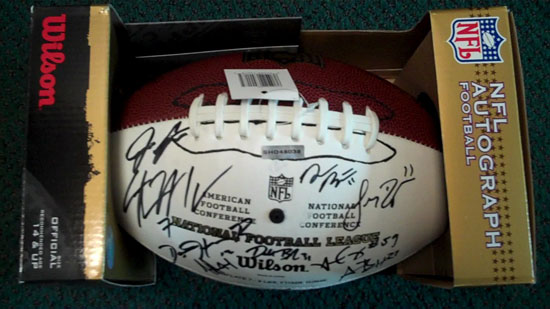 Collectors who successfully guess Upper Deck’s “Rookie of the Week” will be entered into a drawing to win a box of 2009 NFL trading cards. For catching two touchdowns (including the game winner against Pittsburgh), Louis Murphy is Upper Deck’s Rookie of the Week. If you entered codes from Murphy’s cards last week, stay tuned to the website to see if you are a winner!

Though the Raiders have beaten some great teams, not many positive things have been said about the organization and their drafting skills over the last few years, with some justification. JaMarcus Russell, Darrius Heyward-Bey, and Darren McFadden have all struggled in their first few years in the league, and Al Davis has come under a lot of fire for the way he drafts his players. He did get one pick right, and it was evident on Sunday that Louis Murphy has the tools to be a very good receiver in this league.

Murphy is another in a long line of late-round draft picks having a ton of success, and unlike a few of the others, he has actually been more consistent. As a teammate of Rookie of the Year hopeful Percy Harvin at Florida, Murphy was a fourth-round pick behind many of the top receivers of the draft. What is so interesting is that Murphy has found a niche on his new team as a three or four slot receiver and already has 23 receptions for 411 yards and four TDs. Pretty solid, no doubt about it. In fact, he is even outplaying some of those top receivers, including Heyward-Bey who has had little success this year.

Luckily for the Raiders, his success has come at very important times in very important games. In week one, Murphy caught a long TD pass from Russell to put the Raiders up late in the game against the Chargers, putting an exclamation point on a great game for him. The Raiders lost, but it was the first of a few late TDs this year for him. Against Cincinnati, Murphy caught another pass for a touchdown in the fourth, this time sealing a win for the Raiders. Then, when the closing seconds startied ticking down against the defending champs on Sunday, Murphy again came through for the victory. It must be a great feeling to have those kinds of last-minute heroics on one occasion, let alone three times in a single season, and from that we can see that Murphy was drafted way below his potential playing level. 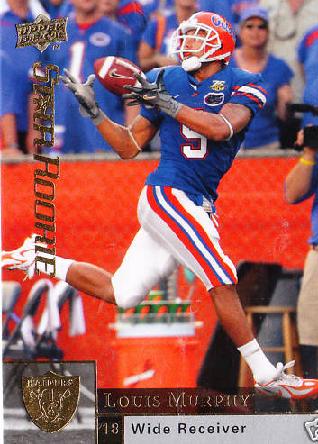 Murphy did not attend the 2009 rookie premiere, but he has had a number of cards that Raider collectors should go after as soon as possible. First, Murphy’s Upper Deck Football rookie card is probably the best of the bunch. He is mid-stride in a game shot from his Gator days, and the card just looks intimidating. I was actually lucky enough to pull one from a box I bought a few months ago, and he has definitely made it worth my time to keep. 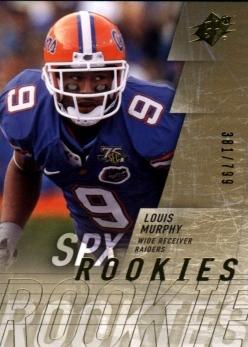 Secondly, Murphy’s 2009 SPx rookie card is also very cool and numbered to only 799 copies for the base version of it. SPx has been known to hold value long term, especially for later round players who may not become superstars until a few years into their career. Murphy’s card should fall under that category, even more so if he continues to play at this high-caliber clip. 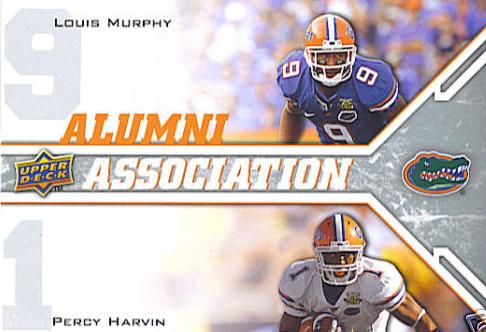 Lastly, I love his Alumni Association card out of UD Draft where he is featured with Percy Harvin on one card. This card is a great addition to any Florida or Murphy collector’s stash, as you have the two top receivers from the Gator’s national championship team on one card. Harvin has a great shot at being rookie of the year, and with Murphy also performing above expectations, this card has some major potential to showcase two future superstars.

Even though the Raiders’ season hasn’t been a success, it hasn’t been a complete failure either. Russell may have shown that he doesn’t have the fortitude quite yet to be a top level QB, but other picks like Louis Murphy show that not all hope is loss for the Silver and Black. Its going to take a lot more than just one guy to bring the team back from the horrors of 2008, but after beating Philadelphia, Cincy and Pittsburgh this year, the Raiders and Murphy have displayed that maybe things aren’t as bad as they seem.