Collectors who successfully guess Upper Deck’s “Rookie of the Week” will be entered into a drawing to win a box of 2009 NFL trading cards. For his great performance and game winning TD catch, Kenny Britt is this week’s top rookie. If you entered codes from Britt’s cards last week, stay tuned to the website to see if you are a winner!

The 2009 season has been a great one for the receivers of this year’s draft. For Kenny Britt, he has gone largely unnoticed on a team that has only recently entered the playoff picture, thus allowing him to fly undercover on most team’s radars. Unfortunately for the Cardinals, they fell right into the trap, and Britt burned them for 128 yards on 7 catches, including the game winning touchdown with seconds left. This isn’t the first game where Britt has burned an unsuspecting defense either, as in week four against Jacksonville, he also had 5 catches for over 100 yards.

At the beginning of 2009, Britt was taken out of a midmajor program at Rutgers in the late first round because of his amazing route running ability and his speed as a deep threat. The Titans’ receiving corps was thin, which meant there was no passing game to offset the attention Chris Johnson would receive after a great season. Bringing Kenny Britt into the picture was going to be the beginning of a solution, and he showed he was ready to play in the NFL from day one. In the first week of the season Britt came away with 85 yards on 4 catches, averaging over 20 yards per catch. Since that time, he only had one TD before his game winner against Arizona, therefore preventing any real conversation about his great potential. Even with 33 catches for 521 yards, he has been little more than a blip, where he should have instead been right up there with Percy Harvin, Hakeem Nicks and Mike Wallace.

For fans of the Titans, Britt has rarely come up short in a game, even though he hasn’t really had the flash to match his consistency. Collectors weren’t too hasty about picking up his cards either, as his value in the hobby was closer to where his production was on the field. Even though he hasn’t been a top value guy for the class, that has been more reflective of his team’s market and his position, rather than the fact that he has put up pretty good numbers this year. Now that he has had a game that has garnered national attention, his prices should change pretty dramatically. 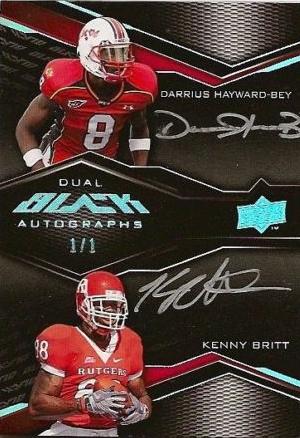 As an attendee of the 2009 Rookie Premiere, Britt has been a focus of many cards over the course of the year. My favorite so far definitely comes out of the recent release of Upper Deck Black, with a dual auto of him and fellow first-round wide receiver Darrius Heyward Bey. It’s always nice to get two for the price of one, and this card, having two guys that should be great in years to come, is a good value. It’s interesting that both are featured in red jerseys, but moreso that the colleges are near each other in geographical location. As a graduate of an East Coast school, I know many people that identify with both the Terrapins and the Scarlet Knights because of where the colleges are located, and having star players from both schools on the card is a great combo. 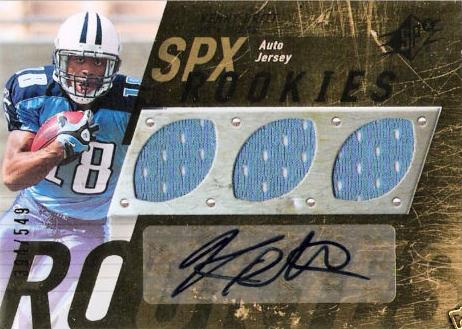 For the fans of Britt that like him more for his role on the Tennesee Titans, look no further than his 2009 SPX Rookie Auto Jersey card. Britt’s photo is one of the better ones of the set, and his bright blue jersey makes the card pop even more. My favorite part is Britt’s dynamic expression. A look that suggests he is midjuke adds much to the overall presentation of the card. Also, having a piece of player worn material, a low serial numbered print run, and an auto definitely makes this even more desirable for collectors.

Despite Britt’s great performance this week, I see this as only the tip of the iceberg for the guy who sat atop my list of draft steals. The Titans are poised for a playoff run if they can continue their improbable winning streak, and Britt collectors should have a great reason to invest further in the guy that could be a key piece to that puzzle. I would think that if he continues to play as well as he has, flying under the radar won’t be easy anymore, but he will have the talent and skill to make up for the change in approach.