Rookie of the Week #14: Michael Crabtree

If winning free cards isn’t enough motivation to get you to enter the codes from the back of your 2009 Upper Deck rookie cards, there will be an added bonus each week for one participant who guesses the Rookie of the Week. As part of the Own the Rookies promotion, one lucky collector will take home an autographed football signed by all of the top 2009 rookies present at the Rookie Premiere. That means authentic signatures from Mark Sanchez, Matt Stafford, Percy Harvin, and all of the other rookies on one awesome football. To the collectors who picked Michael Crabtree this week, you have the chance to win one ridiculously cool prize!

Collectors who successfully guess Upper Deck’s “Rookie of the Week” will be entered into a drawing to win a box of 2009 NFL trading cards. Thanks to his great game in a critical situation, Michael Crabtree is Upper Deck’s Rookie of the Week. If you entered codes from Crabtree’s cards last week, stay tuned to the website to see if you are a winner!

First off, I want to say how cool it is to be in week 14 and still have a new rookie to write about. I think that to have a season where close to a dozen or more different rookies have had great games each on different weeks has been a testament to how diverse and talented this class is, all the more reason to enter your codes to get in on the contest for the amazing autographed football mentioned above.

For Michael Crabtree, it has not been a dream season, and that has soured many of the great moments that a rookie will have. Coming into the draft, he was widely thought of as the top receiver available. Some draft boards even had him going as high as number two or three, as his talent was undeniable. However, when a fracture in his foot kept him out of the NFL rookie combine, his stock started to drop. Eventually, he was drafted at number ten by the 49ers, a team elated to have him fall into their laps. They were on cloud nine, but Crabtree wasn’t happy. His low draft spot led to one of the longest holdouts in NFL history, including a few threats that he may try to reenter the draft in 2010.

Fortunately, cooler heads prevailed, Crabtree signed, and he has started almost every game since then. The talent that was the most coveted commodity when he came out of college has already started to come through on the field as well. This potential was most recently displayed in his great game against the Cardinals this past Monday, where Crabtree caught five passes for 67 yards and a key TD. Although the Cardinals game was one of the first times that Crabtree looked familiar with his team on the field, his production has been building towards a crescendo. Even with fewer games under his belt, Crabtree has already out-performed Darrius Heyward-Bey, the receiver drafted before him. Plus it is safe to say that if he had avoided the holdout, he would most likely have the best stats of any rookie receiver.

I am expecting that as the season comes to a close, Crabtree will definitely continue to grow in his role with the team. Due to a lack of options in the 49er receiving corps, he will need to play at an elite level for the team to be in the playoff hunt on a regular basis. They play in division where teams like the Cardinals will come into the picture each year, and as long as he plays as well as he did on Monday, the two teams will have a great game twice a year. 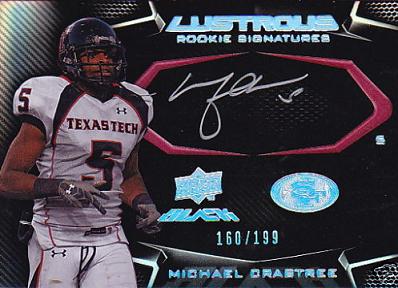 As part of the 2009 NFL Rookie Premiere, Crabtree has had lots of cards in Upper Deck products throughout the year. He was also one of the rookies to sign the rookie autographed football, which is great for the lucky person who wins that awesome rock. I have many favorites of him as I think he is a pretty dynamic subject for any card. In fact, his recent card from Upper Deck Black is one of my top ones from the year, as it features a hard-signed signature, as well as an awesome design. The card is also quite rare and valuable, which has led many collectors to chase it for their Crabtree collections. 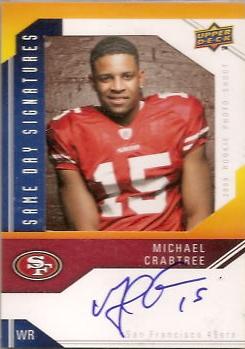 Crabtree was also a part of the Same Day Signatures set, which features him in his 49ers uniform and is one of the most collectible rookie cards on the market. Also, the card is another hard-signed signature, featuring some very cool inscriptions for both his Texas Tech fans and his Niner fans. These cards were seeded at one per case out of Upper Deck football, and buying the packs could net you some sweet autographed memorabilia if you are playing along with Upper Deck’s holiday hunt! 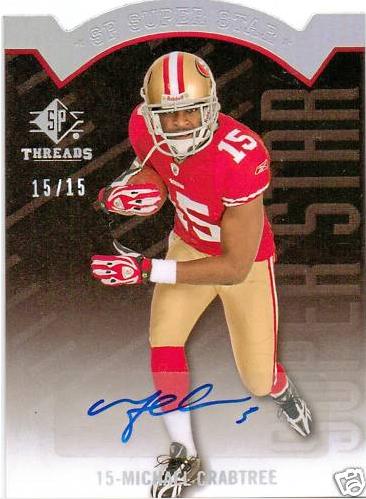 Lastly, I am in love with his SP Threads future star, die-cut cards. Although the autographed parallels are numbered to only 15 copies, the card reminds me of my younger days of collecting the SP brand from the early nineties. It also features a great photo and is one of the better designs of the year. This card is a retro-style update to those early Upper Deck sets, and if you loved those cards in your childhood as much as I did, this card is for you.

From what I have seen with Crabtree in the limited exposure since week 7, I know that his cards will not be a bad investment at this point whatsoever. The guy, though he had his initial problems, is a complete animal on the field who should continue to be great in his future career with San Francisco. I also think that in terms of his attitude coming out of the hold out, there may not be a better coach to deal with him than “Mr. No-Nonsense” Mike Singletary. Singletary’s ability to wrangle him towards the path of an NFL star is documented over the last few games, and I think that after Monday night, Crabtree is starting to believe as well.