Very few people would argue with me if I said that Michael Jordan was the best player to ever step on to a basketball court. What many don’t understand is that Jordan was not simply blessed with unbelievable talent. He was never the fastest player on the court, nor the strongest. He didn’t even make his high school basketball team the first time he tried out. Something else made him great and it was something that no one else at the time seemed to have: heart. One thing that can’t be taught is having the passion and drive to persevere through hard times. Jordan lived by the motto of “what doesn’t kill you only makes you stronger.” Jordan displayed this passion for the game his whole career. This is the reason that he is also one of the most respected basketball players of all time.

When Jordan entered the NBA in 1984, he quickly emerged as a rising star. Since then, people have been in a rush to anoint someone else as the “next MJ.” The title has gone to many unworthy people such as Grant Hill, Jerry Stackhouse, Penny Hardaway, and even J.R. Rider! Many felt that the closest comparison to Jordan would be Kobe Bryant. But that was before LeBron James entered the league. Like Jordan did, James wears uniform number 23, largely out of respect for his favorite player of all-time. That isn’t the only thing James mimics about Jordan. James has undergone Jordan’s offseason and regular season workout routine. When Jordan finishes a regular/postseason, he takes a couple of weeks off, and then gets right back to work. He chooses one facet of his game that he could improve on and works on that during the entire offseason. This is the same regimen that James employs. Additionally, James can seemingly fly like Jordan, and also shares a similar understanding of the game.

For all of these reasons that symbolize greatness is why Upper Deck signed an exclusive partnership with James. He has joined his idol – the other No. 23 – as an exclusive representative of Upper Deck. Not only is James following Jordan on the court, but off the court as well by making smart and timely business decisions. Jordan has been an exclusive partner with Upper Deck since 1991. He is also one of the most successful sports businessmen of all time, a moniker James would like to wear as well. 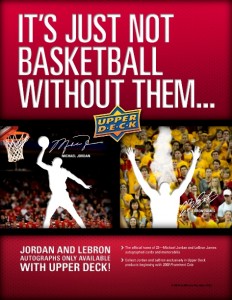 James got off to the right start by teaming with Jordan and Upper Deck. Their job now is to help revitalize the trading card industry, and reaffirm Upper Deck’s position as the industry leader. If you would like to collect any trading cards or memorabilia that boasts a signature from either of these living legends, look no further than Upper Deck. We have several pieces of autographed memorabilia that would more than satisfy any collector. 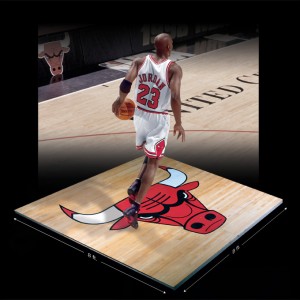 One of the more intriguing pieces in our inventory is a Jordan-autographed Bulls game-used floor. Between 1996 and 1998, Michael Jordan and the Chicago Bulls dominated the NBA like no other team in history, setting the record for victories in a single-season (72-10, 1995-96) and over a three-year span (203-43, 1995-98). Upper Deck presents a direct link to that historic era with a familiar section of the playing surface, an authentic piece from the 1996-98 United Center floor featuring the Bulls team logo. This amazing showpiece measures 8’ x 8’ and will be signed and custom inscribed by Michael! Be the first to own this extremely rare 1-of-1 piece of memorabilia by visiting www.upperdeckstore.com.


I forgot that Jerry Stackhouse was in the “Next Jordan” grouping. The farthest off of all time has to be Harold Minor. A couple crazy dunks and someone was calling him “Baby Jordan”.