One of the most exciting reasons to collect NFL rookie cards is that you get to watch their values spike if the players perform well on the field. To capture that excitement, Upper Deck launched a new website in September to help collectors track 2009 NFL rookie cards, but also make predictions on which rookie would have the best week at OwnTheRookies.com.

Collectors who can successfully guess the player who will be Upper Deck’s “Rookie of the Week” will be entered into a drawing to win a box of 2009 NFL cards. For posting an off-the-charts performance and a multi-touchdown game, Philadelphia Eagles wideout Jeremy Maclin has earned top honors for Week 5. Congratulations to Daniel W. from Monroe, WA who entered codes from Maclin’s cards last week, and is this week’s  winner!

In April, every team that was looking to draft a wide receiver had eyes for Maclin on their board due to his NFL-ready skill set. Most scouts were putting him at or around a top 10 pick, some even had him ahead of much-trumpeted standout, Michael Crabtree. Yet, as the first picks were selected and no receivers were chosen, teams in the lower half of the round got excited. When Oakland selected Darrius Heyward-Bey with No. 7, and then the Niners picked Crabtree at No. 10, there was a good chance Maclin would fall to one of the lower picks in the round. Philadelphia took him with the 19th pick overall, knowing that they could use him right away on special teams and as a second or third receiver behind rookie sensation DeSean Jackson. 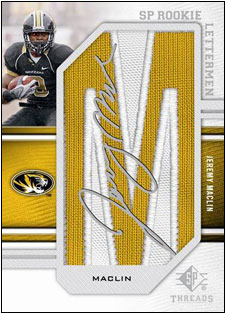 Maclin had a quiet start to the season with very few catches and almost no yardage, but exploded with 142 yards receiving and two TDs against the Buccaneers this past Sunday. Maclin outplayed practically everyone on the field, and electrified the crowd with two long catches that put the Eagles up for good. Maclin was always thought to have amazing potential, and games like this make it all the more apparent to his coaches. He was touted as one of the best route runners in the draft, and as many veterans have noted, that talent is almost more important than speed. During Sunday’s game, this fact became pretty apparent, as well as Maclin’s burning speed to boot.

Luckily for collectors, Maclin will have some amazing cards this year, especially in the upcoming Upper Deck sets like SP Threads and Black due to be released in the coming weeks. When you factor in that he is doing a great job lifting existing value in cards as well, he represents a great investment for anyone. His autographed letter patches that will be released next week with SP Threads will be a fan favorite as usual, as collectors love to put together the nameplate of the player. They hold more value than normal cards for that reason, as there is a great sense of achievement in being able to display a player’s whole name on your display shelf.

Maclin was also featured in the “Same Day Signatures” insert set in 2009 Upper Deck Football, which features a hard-signed autograph of him in his Eagles uniform. This is something rarely seen this early in the season, as players are usually unable to sign during the actual season. Because of a lack of on-card NFL uniform signatures and the rarity of the cards (one per case), the Same Day Signatures collection is one of the most valuable released so far.

Lastly, I would check out his SPx “Rookie Material Signature” card inserted in Upper Deck’s recently released 2009 SPx set. In my opinion, it’s one of the better designed cards this year and is limited to just 50, depending on the parallel. Because the Eagles’ silver, green and black color scheme goes so well with the silver design of the card, it’s a great card to go after due to its simple beauty. 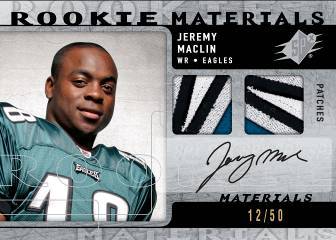 The fact of the matter is that Maclin will never have a hard time playing alongside a great QB in Donovan McNabb. This will be especially great news for the Eagles and Maclin collectors alike, as the Eagles have never been known for their prowess at wide receiver. Maclin should cement a young corps with Jackson and may turn out to be one of the better picks of the 2009 draft. He has some growing to do, as do most rookie receivers, but his potential and talent will trump any obstacle he runs into in terms of competition.

Check in next week for the newest rookie to win “Rookie of the Week” honors and don’t forget to enter in all your rookie card codes from the Upper Deck products you have collected so far. Not only can you win prizes, but the site has some great features that allow you to track rookies and their cards this season!