The ABC’s of Card Handling OCD

When I was growing up, all the adults in my family made it very clear to me that cards were not supposed to be “played with”. Cards were not “toys”, they did not get left lying around to get dinged corners or creases, they certainly did not go in my bicycle wheels, and I was not supposed to flip them.  So you can imagine that over the years these lessons have stuck with me, and I am very, very meticulous about how I handle cards.

When I open packs, the cards immediately get put into numerical order unless it’s a player I collect (in which case he gets logged in, and put into his respective binder). Autographs and relic cards get scanned to show off, then go into penny sleeves and either a snap case or toploader depending on who it is. I was also told to be very careful when trading cards so that I didn’t end up getting hosed.

If you were to look at my binders, they may not necessarily be in chronological order (most are) but they are mint. When I see other people’s binders and they have cards in them with creases or white corners it drives me bananas. I don’t know why, it just does. I also don’t like handling my cards once they are put into the binder or cases as the case may be. Don’t get me wrong, I love looking through my cards but I just don’t need to touch them and potentially damage them. I don’t have an answer as to why I’m so crazy about my cards . . . I just have issues I guess.

I learned about trading cards with friends at a very young age. My mom’s friend had a son who was a year or two younger than me, so when we would go to their house I would always bring my binder so we could trade. We would run upstairs and carefully show off what we got since the last time we saw each other, and then we would make trades. It was the early to mid 90’s and all he wanted was Griffey Jr’s or Gary Sheffield, and I wanted Yankees: it did not matter who they were. Had I known that a heap of Kevin Maas and Matt Nokes would end up as kindling for a fire, I may have held onto some of my Griffey’s. But don’t worry, I never traded rookie cards of anyone, and I am still reluctant to do so. I always had to inspect our trades and make sure there were no creases or fingerprints (pet peeve) on any of them, then we traded and put our new acquisitions into our binders. My friend was also very careful with his cards, so this usually worked out well. 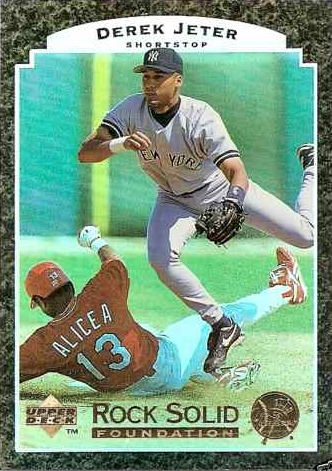 As a kid, Christmas always involved baseball cards. My brother and I always got a complete set for the year, and some Yankees in our stockings. The year Derek Jeter came up I got a whole bunch of his cards including one of my favorites, the Foundations card. By the way, the one Jeter card I really want to own eventually is the SP rookie. They are hard to find in good condition ungraded.

As I got older it seemed that less and less people were collecting cards, and I’m talking like 5th or 6th grade through high school. At that time I started selling cards I didn’t want so I could go to the hobby shop and buy Yankees and new packs. It seems as though I had the mind of a little entrepreneur as a kid and was always looking to turn unwanted cards into new stuff.

I know that many people out there have a warped perception of what types of people collect trading cards as adults, not to mention those who blog about it (like me). Trust me, they are almost always the complete opposite of the stereotype. But honestly, if it wasn’t for crazy people like me who had learned lessons as children about cards, there might not be many people buying them anymore. I have been blogging about cards for about two years now, and I have met so many people that I trade with and even talk to on a regular basis. I couldn’t even begin to tell you how much fun it is. I have acquired hundreds of Yankee Stadium Legacy cards for my collection either via trade, or people just send them my way because they don’t want them. My Pujols collection has also been boosted by fellow collectors’ trading cards, and buying singles online.

Any cards I don’t want now go up for trade on my personal blog, or I try and flip them on eBay in order to get new cards. Some things just don’t change: either you have a passion for collecting or you don’t.  Collecting cards is one of the few things you can continue to do from childhood and is a great hobby.

Every time you turn a page in your binder you put a tiny amount of wear on your cards. I know this might be an over exaggeration, but imagine your cards as a beach, and your binder as the ocean. The cards tend to shift around, and the top two corners can be exposed to damage. Over time this will add wear to your cards.

A lot of binder users tend to over populate their binders as well. This adds weight to the cards underneath, and forces the binder to bend. If you have chrome cards they tend to bend with the binder, and nothing is more annoying to a picky collector then attempting to make a once cherry card flat again.

Binder pages also tend to get stuck under the steel rings, and not only is this a royal pain, but it can also damage your cards. I have witnessed cards badly damaged, because the pages have slid out of a binder in transport.

Sleeve and, top load your favorites.

Store them in a safe location that is easy to access , and out of direct sunlight. I use a file cabinet, but a covered shoebox works well.

Either sleeve your commons, or leave them bare, and store them in a nice fold over box (you can get them at any card shop).

This practice will provide you with a lifetime of mint collecting, and will also give your collection a nice safe home. It’s also the safest way to examine your cards individually as well.


I am the friend’s son……I still have my cards. Most of them are still in the binders, but the GOOD cards are tucked away….Who knew you would make a career out of this one day… Joe T

The Start of the Shopping Season | Upper Deck Blog


[…] to do things, so that I’ll know what is where. Some of you may remember from a previous post how crazy I am about how I organize and handle my cards; so it may come as no surprise, but I am looking for alternative ideas […]