Collectors who can successfully guess the player who will be Upper Deck’s “Rookie of the Week” will be entered into a drawing to win a box of 2009 NFL cards. For putting up the best game of any rookie wide receiver so far, Mohamed Massaquoi has been given top honors for Week 4. If you entered codes from Massaquoi’s cards last week, stay tuned to the website to see if you are a winner!

Even though Massaquoi was the tenth receiver taken in the 2009 NFL draft, and the second by the Cleveland Browns, he is the first of two wide receivers to put up a 100 yard receiving effort in the league. He has been a bright spot for a team that hasn’t had many this year, and thanks to his performance on Sunday, he gave the Browns a chance to win their first game.

Massaquoi benefitted greatly from having Stafford throw to him at Georgia, and the Browns surprisingly went for him after drafting Brian Robiskie in the earlier part of the second round. Even though Massaquoi only had two receptions for 31 yards coming into Sunday, he exploded with eight catches for 148 yards in the loss to the Bengals. I’m sure it was quite surprising for the Browns, as he was never supposed to be a big factor in the offense this early. However, with Derek Anderson gaining confidence in his ability, he may continue to have a place. 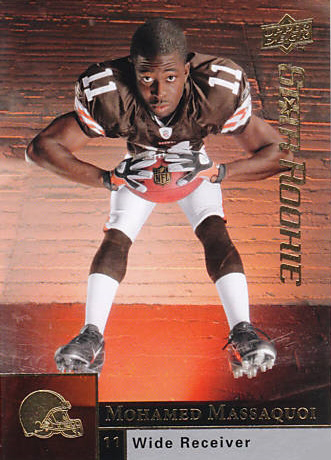 As a part of the 2009 NFL Rookie Premiere, Massaquoi has had a lot of cards in the first releases of the year, and will continue to have them as the year progresses.  Personally, I really like his base rookie out of Upper Deck football, as it has a pretty unique picture. Massaquoi is almost floating in the air, and he looks like he is about ready to bust that football he is holding. Many of the rookie cards in the flagship set this year have some amazing photography, and this one is no exception. 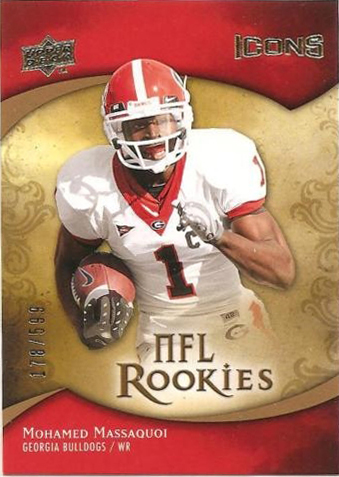 He also has a great looking rookie card out of Icons, this time featuring him in his Georgia Bulldogs uniform. Georgia fans, like their mascot, can be quite intimidating. Their passion means he’ll continue to have a following, which adds more value to these cards. The card also has autographed parallels, some of which are very affordable. 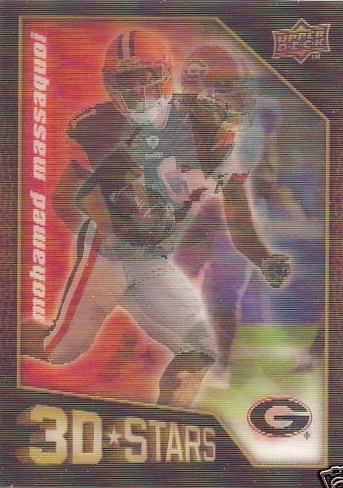 Lastly, if you are a fan of both the Browns and the Bulldogs, I would check out his 3D-Stars card out of Upper Deck, which features pictures from both. It’s a pretty cool concept card, showing the transition from the college to pro uniform (not to mention some “dancing” images).

Massaquoi’s value is more reflective of his selection in the draft rather than the production on the field at this point, which gives you a lot of room to invest in his potential. He has a lot of talent, and the Browns seem to love to use him as their preferred slot receiver, so it’s not a bad idea to take a look at him when selecting a target for the year. You won’t have to spend a lot of money to build a great collection, and the guy has already put up the best game of the year so far. He isn’t going to get the attention of someone like Mark Sanchez, but that will work to your advantage until he has another great game. With very little other talent on the field for the team, I can guarantee you that this will not be his last amazing performance.

Check in next week for the newest rookie to win rookie of the week, and don’t forget to enter in all your rookie card codes from the Upper Deck products you have collected so far. Not only can you win prizes, but the site has some great features to allow you to track rookies and their cards this season!