Who has the working resume of going toe-to-toe with Jimmy “Super Fly” Snuka in Madison Square Garden, battling King Koopa in chivalrous defense of the Mushroom Kingdom princess, but is probably best known as having been humbled by a girl who just wants to have fun? Perhaps best known for his cameo in Cyndi Lauper’s biggest single as her fun-hating father, Captain Lou Albano had a character range that could only be matched by his Technicolor wardrobe. Whether he was portraying a gruff heel or endearing old codger, the man disarmed you with his lively personality and changed the face of an entire industry. 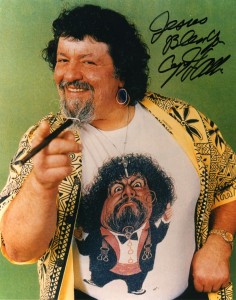 If you ever gave someone the DX chop, smelled what the Rock was cooking, or daydreamed of giving your boss a Stone Cold stunner, it’s thanks to “The Captain.” The lynchpin of the 1980s wrestling boom, Captain Lou combined the emerging new media outlet MTV (yes, there was a time before MTV) and professional wrestling with Rock ‘n Wrestling, the two soon-to-be media giants and industry leaders cross-promoting their talent through newfound channels. And here at Upper Deck, we want to salute those innovators and pioneers who change the way we interact with our hobbies. Albano passed away today after about a week in hospice care. While all my old wrestling cards and stickers (including one of Capt. Lou) were long lost when I outgrew my childhood bed, I still watch wrestling today and know that events like “Wrestlemania” would not be possible without someone like Lou working across all genres of media to expose his craft and passion. Every time my favorite wrestler, CM Punk, smugly stomps from behind the curtain to the tune of Killswitch Engage, I know that the roots of that rock and wrestling connection are with the Captain. He started out a wrestler, but gave back to the industry an unquantifiable amount more than he ever took. So, in tribute to a fallen legend, one time, let’s do it for Lou. Swing your arms from side to side! Come on, it’s time to go! Do the Mario! Take one step and then again! Let’s do the Mario all together now!