One of the most exciting reasons to collect NFL rookie cards is that you get to watch their values spike if the player performs well on the field. To help capture that excitement, Upper Deck launched a new website to help collectors track 2009 NFL rookie cards, but also make predictions on which rookie would have the best week at OwnTheRookies.com.

Collectors who successfully guess the player who will be Upper Deck’s “Rookie of the Week” will be entered into a drawing to win a box of 2009 NFL trading cards. For breaking the 100-yard barrier and putting up a score, New York Giants’ wideout Hakeem Nicks is Week 6’s top rookie. If you entered codes from Nicks’ cards last week, stay tuned to the website to see if you are a winner!

When it comes to rookie wide receivers, the New York Giants have had a blast over the last few years. In 2007, the Giants drafted Steve Smith, who has become their go-to guy in the passing game this year. Last year they went with Michigan standout Mario Manningham, who has already amassed 392 yards and 4 TDs through Week 6 this season. This year seems to be no different for Nicks (out of UNC) who has been having one of the best years of all the rookies drafted in 2009. Nicks may come from a school better known for its top-of-the-class basketball program, but that hasn’t stopped him at all so far. 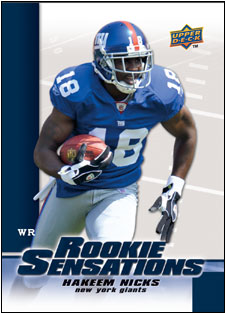 When the Giants finished the 2008 season, they had a huge hole left at wide receiver thanks to off-the-field problems by Plaxico Burress. Burress had anchored their corps for a few years, and doubters weren’t too sure of Smith and Manningham’s capabilities of being the go-to guys for the team. Nicks had shown up overweight and ran slow at the combine, but Giants head coach Tom Coughlin saw potential in a player that had put up monster numbers during his college career. Michael Crabtree, Darrius Heyward-Bey, Percy Harvin and Jeremy Maclin had all come off the board, so the G-Men didn’t hesitate in taking Nicks to solidify their future offensive firepower.

As the Giants broke camp, the once shaky wide receiver picture was starting to come into focus, and Nicks was definitely going to be a huge factor. Unfortunately an injury sidelined him for Weeks 2 and 3, preventing his numbers from being even bigger than they already are. After his return, however, his huge size and quick feet proved to be the invaluable, which prompted the Giants used him as a deep threat as well as a possession option in the flats. He quickly notched three TDs and 250-plus yards in three games, and has become a favorite target of QB Eli Manning in clutch situations. 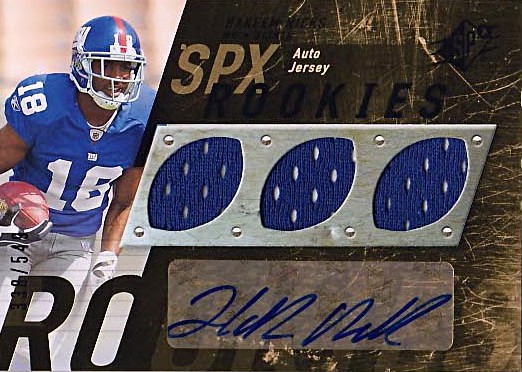 You would think his performances in the last few games would have helped his card values jump a bit, but he is actually still a diamond in the rough. His Upper Deck cards like the SPX rookie jersey autograph, and the SP Threads Lettermen Autograph are still affordable, and I would NOT hesitate in picking up a few if you have the chance. Nicks’ cards will continue to be a great investment as he continues to grow among the young Giants receivers. He is tied for the lead in rookie receiving touchdowns and is also near the top of the rookie leader board in yards.

Nicks also has some great Upper Deck cards in Icons, Draft Edition and Philadelphia if you are a UNC fan, most of which are hard-signed cards. His Philadelphia National Chicle Mini is one of my favorites so far, as the painted card looks great in Tar Heel blue. These cards will complement any collection you are building, especially as sets like UD Black and SP Authentic hit the market later this year. 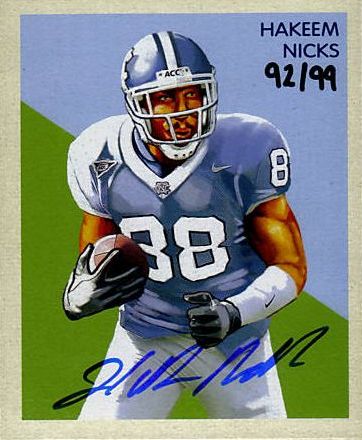 Lastly, I would check out his Premier Jersey Autograph insert card out of the 2009 Upper Deck product. The card looks amazing, features both an auto and jersey worn by the player, and is extremely rare at less than 50 copies. These cards were inserted at one per case, and so far represents my favorite subset in any set from 2009 because of the way they look. Nicks’ card definitely fits the bill, and should be one of his more valuable options released due to its rarity and design.

As the 2009 NFL season moves on, I have a feeling that Nicks will continue to amaze. The Giants are one of the NFC’s best teams, and are favorites to go far in the playoffs. With players like Smith and Manningham around him, as well as horses like Manning, Brandon Jacobs and Ahmad Bradshaw, Nicks will have lots of company to aid in his development. I have said before that a good supporting cast is key for a rookie, and it’s obvious that Nicks has no shortage of talent around him. Luckily for collectors, that means Nicks’ card values should also perform well.