Can anyone tell me why the 2-2 San Diego Chargers were favored by three points to defeat the undefeated 6-0 Denver Broncos? It seems like every year, the Chargers are handed several unwarranted accolades before the season starts. For the last five years, it’s become standard to see NFL analysts picking the Chargers as their Super Bowl favorites.

Well, in the last five years, I can’t remember the Chargers overcoming either of their on-field archrivals: the Pittsburgh Steelers or the New England Patriots. Since they haven’t beaten either of those teams, I can’t understand why we continue to praise them. It’s about time that we start watching and analyzing the game of football from an unbiased point of view and stop attempting to rename chickens as ducks every year.

If you were able to see through the hype this time around, you knew the Chargers came into this year looking just as vulnerable as they did last season. Let’s not forget they needed a four game winning streak (vs. the Raiders, Chiefs, Bucs, and Broncos) and a Broncos three game collapse in order to make the playoffs last year. Nevertheless, they looked no different Monday night when the Broncos avenged last year’s game that essentially eliminated them from playoff contention. Denver rushed for over 100 yards, and quarterback Kyle Orton went toe-for-toe with the much-hyped Pro Bowl quarterback Philip Rivers. Orton ended the day with 229 passing yards, two touchdowns, and a 115.4 quarterback rating.

Both the offense and defense performed as expected for the Broncos. What was extremely surprising was the special teams play in this game, which featured a total of three returns for touchdowns, one by the Chargers and two by the Broncos. The Chargers pride themselves on having a sound special team, especially since they send at least two players to the Pro Bowl every year. Well, Eddie Royal had little respect for what the Chargers’ special teams had accomplished in the past, torching them for a 93-yard kickoff return and a 71-yard punt return. Royal became the first player in Broncos history to return a kickoff and a punt for touchdowns in the same game, leading undefeated Denver to a wild 34-23 win over the San Diego Chargers. 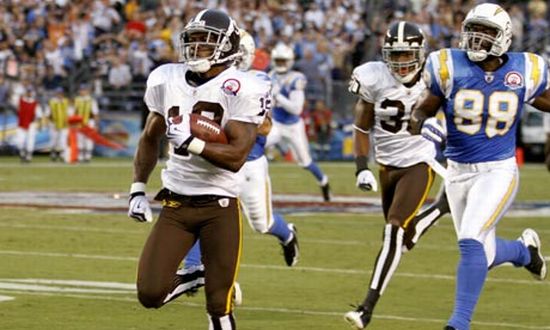 The only bright spot that head Coach Norv Turner can build on is the fact that LaDanian Tomlinson looked healthier than he has at any point in the last two years. He was running with an attitude, which is a welcome change after seeing him spend many games being ineffective, if not sitting on the bench. For at least one night, his trademark cuts, quickness, and elusiveness seemed to be back. If he can get going, then maybe the Chargers’ season isn’t a forgone conclusion quite yet. And let’s not forget about Darren Sproles reinforcing what we already know: he is an electrifying player when used the right way.

Looking ahead to next Monday night, the Philadelphia Eagles are taking on the Washington Redskins. This is an intriguing game because both of these teams have glaring issues that need to be resolved. Redskins head Coach Jim Zorn was stripped of his play-calling duties this past week after scoring only two field goals and losing to the winless Kansas City Chiefs. It seems like management is giving him subtle signs that unless he gets this team turned around quickly, he could be on his way out. The Eagles compounded their division problems by losing to the Oakland Raiders. Truly an embarrassing loss for head Coach Andy Reid, and incumbent starter Donovan McNabb. This is the same Raider team that was eaten alive by Eli Manning and the New York Giants. In fact, I recall Manning ending the first half with 173 passing yards, two touchdowns, and a perfect quarterback rating (backup quarterback David Carr ended up finishing the game with over 100 yards and a touchdown). The blunder by the Redskins against the Chiefs is somewhat acceptable, because the Redskins have looked horrid all year. The Eagles on the other hand, have disappointed many by losing a game they should have won convincingly. On the bright side, both teams have a chance to redeem themselves come Monday. I’d put my money on the Eagles, since their issue was more about underestimating the competition and failing to prepare properly for a west coast game, rather than lack of talent and coaching. The Redskins, however, have a lot more pressing issues to deal with, starting with their head coach and ending with their quarterback.

Get ready for another exciting Sunday, followed by a much-anticipated division rivalry on Monday Night Football!


Your articles as whole was very cool and educational.San-Diego chargers were over-rated at the first place.Nevertheless, I believed the Denver Broncos would soon face the reality playing the Ravens, Pittsburgh and the giants in couple of weeks.San-Diego can still win the AFC west, but cannot beat his rivals Pittsburgh and the patriots to go to the next level.Shame on Washinghton Redskins,after spending $100 million on one player and still cannot have a winning season.For the Eagles, they need to beat the team they suppose to beat and take care of business.