You know the drill by now. I’m sitting at my desk, minding my own business, and I get a call about the latest goodies we have in house. So I walk on over to the vaults and what do I see? The Presidential Hair Cut Signature cards from SP Legendary Cuts. These cards feature a cut signature from the historical figure, along with a strand of their hair. Unreal.

No, I’m not going to reveal them all today, but let’s start with one of the most polarizing Presidents we’ve had: 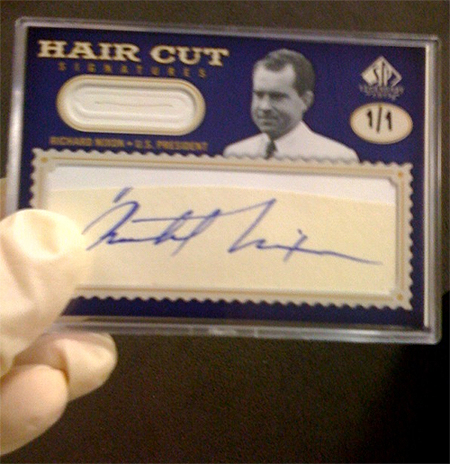 Without going too much into my own personal political beliefs, I can say that like most Americans my age, Nixon is more or less synonymous with Watergate and resigning the Presidency. But looking deeper into his history (which is quite extensive), I was surprised to see he was on the baseball, football and track teams in college, went to Duke University, was an excellent debater (that one isn’t too surprising), and even did some acting. And that was all in college!

Of course, he was Vice President before being elected President (with a campaign loss to JFK in-between), where issues like Vietnam, Segregation, the moon landing, foreign relations with China and Russia and erasing the gold standard were just some of the highlights of his Presidency.

And of course, one lucky Upper Deck customer will get to own a piece of this history: not just a signature, but a piece of the man’s hair too.


Eric got it back this week. I can’t wait to get it into the store so we can take a proper photo.

The next time someone asks what the best card we’ve had pulled in the store, it will be an easy answer!