If you’ve been following the promotion at OwnTheRookies.com, you know that Matthew Stafford is our current Rookie of the Week. After nineteen straight losses, the rookie quarterback and first overall pick from the draft lead the Detroit Lions to their first victory since late 2007. On the collecting side of things, Adam Gellman did his usual great job of showing which cards to invest in for Stafford, and why.

A few weeks back, I cracked into the vaults here to get some shots of the amazing, limited Mark Sanchez USC jersey cards. I do like to be topical, so check out another one I captured at the same time: 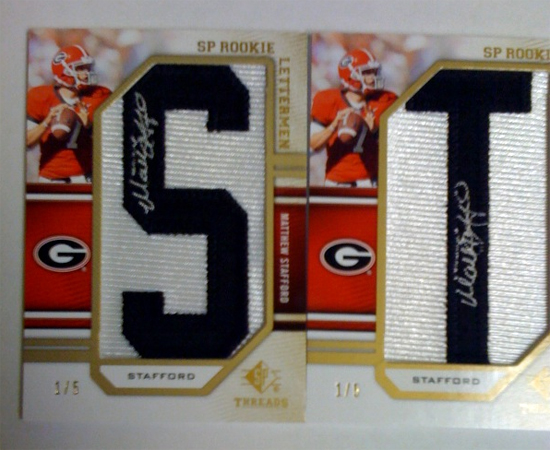 Yet another gem from SP Threads (coming to a retail store near you soon!/shill). It’s a signed letterman patch produced in very limited quantities: check the number. And of course, I’ve got to show off the full spread (good luck collecting THIS . . .)

Pretty sweet, especially considering Stafford will only be a rookie once. But can he lead the Lions to two wins in a row this Sunday?