Brag Photo: ‘Legendary Pioneers’ – Who Will Take it Home?

Completing a set of trading cards can be difficult sometimes, but the satisfaction one feels when it’s complete is pretty special. We wanted to make it achievable once again for one of Upper Deck’s most famous baseball sets: “Legendary Cuts Signature Cuts.” These cards feature an authenticated cut signature of a deceased baseball legend. In previous years, with so many 1-of-1 and extremely limited versions of the cards, it was impossible to put an entire set together. In 2009, we decided we would make each cards limited to at least five copies so it would be possible for a devoted SP Legendary Cuts fan to put the entire “Legendary Cuts Signature Cuts” set together.

We wanted to spice things up a bit by providing an amazing bonus for the first collector to finish the 300-plus card set. We brainstormed about what we could create and working off the theme of legendary cut signatures, the “Legendary Pioneers” card was born. It’s one thing to talk about it, but it’s quite another to see the completed card when it arrived at Upper Deck Headquarters earlier this week.

What makes the “Legendary Pioneers” card so unique, you ask? Well just take a look at the front. You start out with an authentic signature from Abner Doubleday, the Union general during the Civil War, who is credited as being the founder of baseball. Then you have an authentic signature of Knute Rockne, one of the greatest college football coaches of all time who came up with a little something known as the forward pass. Tom Brady thanks you for that one Knute. You can also see the card is limited to just one copy. 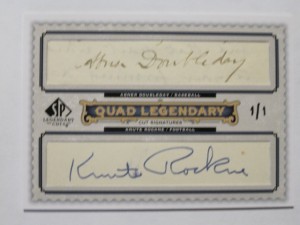 Then – let me see if I can keep my hand from shaking too badly – you flip it over to discover another set of authentic cut signatures. On the top you have a signature from Dr. James Naismith, the inventor of basketball. They say he also introduced the first football helmet. And beneath him we have an autograph of Lord Stanley or as he’s known in the states, “the guy they named the Stanley Cup after.” 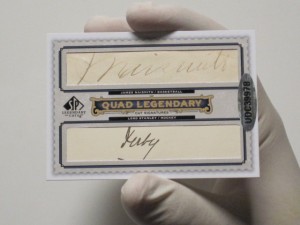 Much like any passionate sports fan, I tend to geek out a little when I see a card like this. It’s just amazing. I feel like getting the chance to hold it is an amazing privilege, but I also need to tell you that it actually gives me a minor panic attack. I cannot even imagine what this is worth in the open market. In talking to Beckett’s pricing analysts, they have no earthly idea either because quite frankly, there has never been a card like this ever produced. 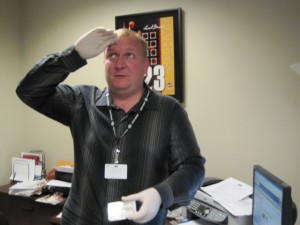 At the National Sports Collectors Convention this summer, I had more than a few collectors ask me about this promotion. Each had a different strategy and many of the cards were snatched up throughout that weekend, a trend that has continued online and at other popular hobby shows since. To be honest, we’re not sure if anyone will complete the set, but we know many are working towards it and it will be very exciting to see who takes home this card.

Time is running out on the promotion so if you are going for it, you better snatch up any of the last cut signatures you need. If no collector completes the set, whoever is farthest along by December 15 will receive this truly amazing card. Will it be you? If you think so, here’s what you do:

1.    Contact me by calling (760) 603-7548 or chris_carlin@upperdeck.com once you have completed the set.
a.    Contact me by December 1, 2009 if you think you may be one of the collectors farthest along with the set.
2.    Directions will then be given to submit the set for validation.
3.    Upper Deck will award “The Legendary Pioneers” card featuring authentic signatures of Doubleday, Naismith, Rockne and Lord Stanley to the first collector who completes the set and contacts Upper Deck for validation or the collector who is farthest along in completing the set following validation.

I hope whoever wins it gives it a good home. In the meantime, I’m putting it back in it’s case for safekeeping.


Heard about this a couple of months ago… I’m still in awe of this. It’s such a cool promotion.