If there’s one thing that fires me up far more than it should, it’s the Cy Young awards every year. Most of the time, the voters get it right. Other times, they tend to focus on the wrong stats (most often wins), and the wrong guy gets the coveted award while the deserving pitcher gets screwed.

Wins are such an ingrained stat in some voters’ minds, and it’s an incredibly unfair metric to use. A pitcher has no control over the offense on his team and how many runs they may score, and he has no control over how good the bullpen is going to be at protecting his lead. C.C. Sabathia can take no more credit for the run support he gets than Greinke can take blame for the lack of the same. If you put Greinke on the Yankees (wait a few years and this very well may happen) and put Sabathia on the Royals, the move would impact their win totals significantly.

Greinke has one more start this year against the Twins on Saturday, where he can get his 17th win and hopefully lock down the Cy Young. He shouldn’t need to worry about this, as he’s currently leading the American League in ERA (2.06) and WHIP (1.07). He’s also second in strikeouts, second in complete games, and fifth in innings pitched. Win totals shouldn’t factor into this at all (especially when you consider the comically anemic Royals offense), but hopefully 17 will be enough to convince those voters he’s been the best this year.

Other American League pitchers have had a fine year this season too, don’t get me wrong. C.C. Sabathia has been his usual durable and reliable self, throwing 227 innings as I write this, with the 5th best ERA and second best WHIP. He also has 19 wins, which tends to happen when the likes of Jeter, Damon, Teixeira and A-Rod putting runs on the board for you. Justin Verlander is leading the AL in strikeouts and is second in innings pitched as the Tigers leaned on him heavily during their final push to retain the AL Central lead. But his 3.45 ERA looks practically gigantic compared to Greinke’s 2.06.

“King” Felix Hernandez is second in ERA with 2.48, which goes to show you how remarkable Greinke has been this year. When there’s a margin of almost half a run per game between the first and second place pitchers, there’s really no argument to make. Even though he pitches for what very well may be the worst team in the league, in a small market, I expect voters will look at the numbers that matter and name him this year’s best pitcher in the American League. 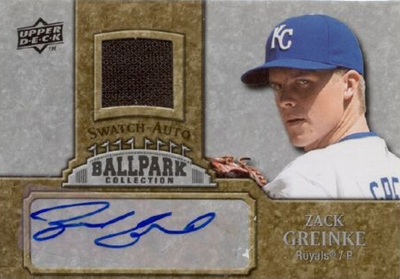 To me though, the real shame of Greinke’s talent being hidden away from the mainstream spotlight is that his personal story is so compelling. Back in 2005 he pitched a full season at age 21, but lead the league in losses (17) and had a horrific ERA of 5.80. He missed most of the next season after being diagnosed with an anxiety disorder, and some reports at the time suggested the talented prospect could be done with baseball. His success since then has been remarkably inspirational, not just for others battling similar issues, but for athletes as well. It’s not a story the mainstream media is really pushing, at least not to the extent they’d run with it in New York, Boston or Chicago. The noteriety of a Cy Young is likely to change that, however.

And if you haven’t had a chance to see the man with your own eyes, make an effort to watch his last start this Saturday against the Twins (or at least catch the highlights): if the numbers don’t convince you he’s something special, your eyeballs certainly will.


Greinke should win CY Young, just like Mauer should win MVP, without contest. The problem is that the people who vote on the award are so comically idiotic that it may not happen that way.

See the FJM reunion articles on Deadspin if you dont see what I mean.