The person who came up with the phrase “Forty is the new thirty” wasn’t too far off this past Sunday. Even though he turns the big “4-0” next week, Brett Favre showed that he still has it, ending the game against the 49ers in epic fashion. With just over one minute left, he started the drive on his own twenty with a beaten up team, no time outs, and against a defense that had smothered him the whole second half. In true Favre-ian style, he marched down the field with relative ease to set up an amazing game winning touchdown pass, leaving a huffing Mike Singletary shocked on the sidelines.

After I was done celebrating with my spooked out wife, I couldn’t help but wonder what would have happened if there was someone else leading the team on that drive. A few years ago, a situation similar to the Niners’ ending befell the Vikings, only they weren’t so lucky to have number 4 in purple then. They had scored late against the Packers, but unfortunately left enough time on the clock for Favre to sling a few quick passes and set up his team for a game winning field goal. I’ll tell you, after witnessing him do it time and time again against the Vikings, it was great for Minnesota to be celebrating this time around.

It wasn’t just the last play of the game that impressed me either. It was also his management of a game that saw the running backs rendered ineffective by a hard charging Niners defense, his calm under pressure, and his unfathomed leadership. Even during the Culpepper years, the Vikings never had that; it makes all the difference in the world to a team known for choking. Even I will admit that I felt the electricity on that last drive, seeing Favre making his reads like a pro, throwing the strikes when needed, and not being afraid of going for it all.

If you haven’t been convinced by Favre’s effectiveness, look at the last drive of the game from 2008’s Vikings playoff loss to the Eagles. Down late with little time on the clock, Jackson crumbled and ended up on the ground while Philadelphia celebrated a huge win on the road. I’m pretty certain that Favre would have at least made it interesting, possibly even winning the game. As much as I hated Favre during his time in Green Bay, I respect what he brings to a team now. You can read it in the faces of the players lining up next to him: look at Percy Harvin if you need proof. 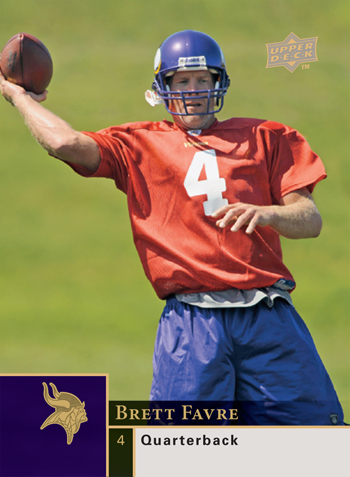 Now, all of the Vikings’ success is not on Favre’s shoulders, mainly because there are a lot of players that deserve credit. Peterson is as he always is, Winfield, Williams, Henderson and Allen are anchoring a great defense, and Harvin has added a whole new level to the offense. Favre is more like the catalyst, as QB confidence is the great motivator. As a defense, if you know your leaders can back up a bad play or two, it leaves you loose and able to take chances. As an offense, you know you will always have a chance to win. Even Peterson has commented how much Favre brings to the table in that respect, as the holes are that much bigger for him with teams having to finally account for a QB. If you have been watching Peterson like I have, you know what that must mean for him (especially when he doesn’t have to face eight and nine in the box every play any more).

Favre’s arrival in Minnesota hasn’t come without problems though, as there are a few issues he has yet to conquer. First, his lack of time in training camp has contributed to some timing issues among other gelling problems, and his fragility has added to concerns about the team’s long term prospects. I’m sure after a game like this recent win, however, he must feel at least somewhat rejuvenated.

For collectors, it is safe to assume that Favre’s upcoming Vikings cards and autographs will be some of the most sought after cards of the year. His card from next week’s SPx release will be the first of many, and after his start this year, it should bring some serious value to the lucky people who pull it. I am super excited for the prospects of what is coming, especially as UD Black arrives in the coming months, with Ultimate, SPA and Exquisite coming later on in the season. As a Vikings fan, this could be the best card year in a long time, especially with Harvin, Peterson and Favre’s success.

In the end, I always hope that the season will end with the Lombardi trophy finally ending up in Minnesota, though as a Vikings fan I am always hoping and praying with little actual confidence. Favre definitely does impact that lack of trust, as the chances of going deep into the playoffs are looking better with each passing week. Despite the recent train plowing through the first three games, everything could change next Monday. Next week puts the Minnesota/Green Bay rivalry on a huge national stage, and it could easily show what the Vikings are truly made of. Hopefully they can live up to the billing and make the Packers wish they hadn’t let Favre go.