One of the most exciting reasons to collect NFL rookie cards is that you get to watch their values spike if they perform on the field. To help capture that excitement, Upper Deck launched a new website last week to help collectors track 2009 NFL rookie cards, but also make predictions on which rookie would have the best week at OwnTheRookies.com.

Collectors who can successfully guess who will be Upper Deck’s “Rookie of the Week” will be entered into a drawing to win a box of 2009 NFL cards. After his strong showing this weekend, Upper Deck has recognized New York Jets QB Mark Sanchez with the honors of “Rookie of the Week”. If you entered codes from Sanchez cards last week, stay tuned to the website to see if you are a winner!

Early on in training camp, Rex Ryan tapped rookie Mark Sanchez to be his starting QB, a move that definitely paid off for him in week one. As a result, Upper Deck has chosen Sanchez as their Rookie of the Week for his impressive play during their 24-7 win over the Texans. Here on the Upper Deck Blog, we will discuss the impact this player has made on his team, as well as a few cards to pick up along the way. 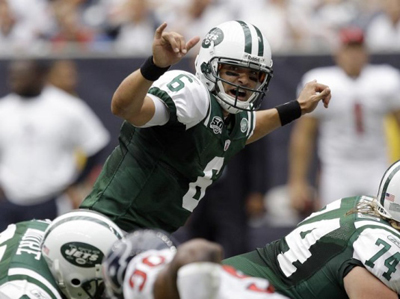 When the Jets traded up to pick Sanchez at number five in the 2009 NFL Draft, many Jets fans were extremely happy to have such a talented quarterback at the helm. Brett Favre was out, Sanchez was the future, and things were definitely looking good. Collectors also latched on pretty early, as Sanchez’s USC career and NFL potential made him one of the most valuable pulls in any product release. Now that he has won his first game, thrown for close to 300 yards and a touchdown (as well as solidified his place as the Jets’ QB of the future) things are only going to get better for Sanchez collectors.

Heading into week one, it was expected that Sanchez would have a tougher time against Mario Williams and the Texans defense than some of the other rookies that were also making their debut. Sanchez didn’t disappoint, however, throwing a rainbow 30 yard touchdown pass to receiver Chansi Stuckey in the second quarter. As Sanchez bolted down the field in celebration, you could almost feel a collective sigh of relief coming from the Jets fans who have dealt with their share draft problems over the last few years. After the TD, he finished the game 18/31 for 272 yards and a convincing Jets win. Sanchez did throw an interception, but the contributions he made during the game were key. He even showed his considerable accuracy with a few throws that moved the chains on third down and long, even against a formidable pass rush. Sanchez kept his cool, hit his receivers, and proved his worthiness of the Jets’ top pick.

Luckily for collectors, there are quite a bit of amazing Sanchez cards to pick up in the wake of his first game, and I would suggest acting quickly due to his growing popularity. The first card I would like to focus on is his Same Day Signature card out of Upper Deck Football. The card features Sanchez in his Jets jersey with a hard-signed signature, and is one of the most sought after cards in the new product. There are a few out there with special inscriptions, making the cards even more amazing. I would be on the lookout for those examples, as they carry quite a premium over the others. 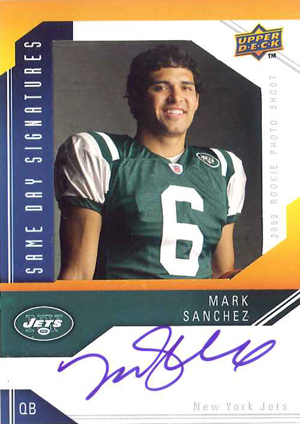 For some of the other people (who may also be fans of Sanchez from his days at USC), the Upper Deck Philadelphia National Chicle mini is one of my favorites so far. The painted card is a short print insert in the recently released set, usually coming only a few per box. Due to the rarity, as well as the amazing look of the card, they are some very valuable cards. If you are lucky enough to get a signed parallel, consider me to be very jealous, as the hard-signed signature makes the card even more desirable. 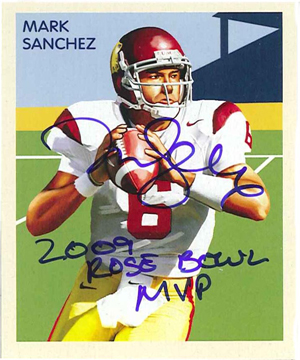 There are also some great cards that are about to hit shelves in the coming week, including his SPx Rookie Jersey Autograph card, one of the first high end cards to be released. The SPx cards are always a favorite of collectors, and feature Sanchez pictured in his Jets jersey. The card is also one of the first to feature player worn jersey pieces, so you can bet that it will be one of the more valuable cards around.

When it comes down to it, “El Matador” is poised to have a great career in New York, and collectors are not hesitating to recognize that potential with the highest values of the 2009 class. His experience in a USC pro-style offense gives him the tools to be extremely effective on a team with no shortage of weapons, thus making him even more valuable to the collectors who have targeted him. Sanchez is definitely deserving of the first rookie of the week for 2009, and I don’t think he has even shown what he is capable of.

Check in next Tuesday for the newest rookie to win top honors of the week, and don’t forget to enter in all your rookie card codes from the Upper Deck products you have collected so far. Not only can you win prizes, but the site has some great features to allow you to track rookie cards this season!