The Jazz Need AK-47 Firing on All Cylinders

We haven’t heard much about the Utah Jazz’s once promising Russian superstar Andrei Kirilenko (also known as “AK-47”).  Most news out of Salt Lake revolves around Carlos Boozer, regarding the latest drama of when and/or if he is leaving town.  We have also recently seen the exploits of Deron Williams and Kyle Korver on YouTube, who are apparently trying to create more interest in dodgeball.  The organization is also celebrating John Stockton and Coach Jerry Sloan’s induction into the Naismith Basketball Hall of Fame.  Perhaps all of these other topics of interest are the cause of Kirilenko’s decline in play in recent seasons . . . in other words, not being the center of attention.

When Jazz legend John Stockton retired and the NBA’s 2nd All-Time leading scorer, Karl Malone left Utah in hopes of winning a title with the Lakers in 2003, Kirilenko became the team’s go to guy.  After being named to the NBA All Rookie 1st Team in ’01-’02, Kirilenko took his game to another level over the next two seasons, averaging 12.0 ppg and 5.3 rebs in ’02-’03, and a career best 16.5 ppg and 8.1 rebs in ’03-’04. This earned him a selection to the All-Star team, along with a reputation as one of the league’s best weak side defenders and shot blockers (2.8 blocks).  The Jazz promptly rewarded the then 23 year old, with a 6 year, $86 million dollar deal.  The Jazz presumably looked to Kirilenko as the piece to rebuild around after the departure of the franchise’s two best players (Stockton and Malone). 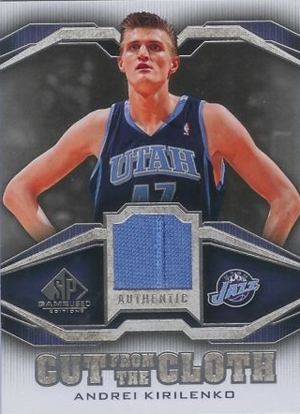 The Jazz hoped they had one of the NBA’s rising young stars, but what they have now is essentially one of the worst contracts in the league.  Kirilenko sustained a broken wrist mid-season in ’04-’05, and sat out the rest of the year to rehab.  Even though he played only 41 games, he finished ranked number one in blocks at 3.3 blocks/game.  He rebounded nicely in ’05-’06 (when he played some games at shooting guard), averaging 15.3 ppg, 8.0 rebs, a career high 4.3 assists, and 3.2 blocks (which was 2nd to Marcus Camby’s 3.3).  Since then, the past three seasons have seen his playing time and production drop considerably.   His numbers during that time declined to averaging only 10 ppg, 4.7 rebs, and 1.6 blocks while playing only 29 minutes/game.  His well documented disagreements with Jerry Sloan won’t help his cause either.  Kirilenko was so unhappy that he threatened Jazz management with walking away from his contract so he could return home to play for a Russian team.

One would speculate that Andrei has a problem no longer being in the spotlight, since he was a focal point on many Russian professional teams, winning European Championships and playing in All-Star games (all before he came to the NBA in 2001 as a 20 year old).  Kirilenko has struggled as a 3rd or 4th option behind Williams and Boozer.  The Jazz have seen their three time Defensive 1st or 2nd Team member’s supposed strongest asset, blocked shots, dip to only half his accustomed numbers.  The drop off is unexplainable since he hasn’t suffered any major injuries and been relatively healthy, playing in 67 or more games over that span.

The Jazz are surely hoping to get the most out of “AK-47” in the last year of his deal.  When the contract is up, he will be a relatively young 29 years old, and surely heading to another team to finish his career.  Some lucky team may get a 6’9 wiry and athletic shot blocker who is just in need of a change of scenery to regain his confidence and All-Star form. The Jazz will be happy too: they will suddenly have tons of money to spend with Kirilenko (and possibly Boozer’s) contracts off the books, and will become key players in free agency.

Allen Moll is an avid NBA and College Basketball fan who watches and studies games religiously. He also coaches youth basketball in his native Lehigh Valley region of Pennsylvania.  Allen is a regular columnist for thehoopdoctors.com, Bleacherreport.com, UpperDeckBlog.com, and his own blog, Hoops Haven  (hoopsworld4.wordpress.com).