Anyone who has ever been to a Yankee game can read that sentence and hear Bob Sheppard in their head. I know I would never hear that any other way. Jeter has stated that he will forever be announced by Bob Sheppard for as long as he is a Yankee (which should be his whole career).

As a baseball fan you either love Derek Jeter, or you love to hate him. There doesn’t seem to be a grey area in this debate. I’ve been having a bit of a back and forth with many people about this love/hate relationship to try and figure it out; it seems as though many people hate him simply due to the overexposure he gets from the media.  Is that a good reason to hate him? I really don’t think Jeter is calling all these media outlets demanding all this attention; he’s not A-Rod.

But I will grant you this: the media does have an obsession with everything Jeter does. Clearly this is more far reaching than just New York, but I wouldn’t know that without talking to many of you out in the blogosphere. Derek Jeter has been quoted saying many times that he doesn’t watch baseball when he isn’t playing, and he doesn’t get the MLB Extra Innings package. Maybe that seems strange, but we can understand he doesn’t want his entire life consumed by baseball.

Personally, I will agree that the media jams him and the Yankees down your throat because they do it here. You all know I am a big Yankees fan, and I can say good things about Jeter until the cows come home . . . but really nothing needs to be said.  You watch him on the field on a daily basis and you know what kind of player he is, you know the dedication and drive he has, and you know all about his place in Yankees history.

Some of you may have wondered what it would have been like to have been there to see Jeter break Gehrig’s record, and some of you may have changed the channel because you are sick of him. If you want to know what it was like, I can tell you firsthand.  It was amazing, one of those moments that I would sit in the rain for six hours to see in person. There was an initial rain delay of 1:27 before the game even started, and I have never seen that many people wait through a rain delay in all my years of going to games. Most of the time if it’s raining people don’t even go, myself included. This was different; this was a matter of seeing 72 years of history being changed in a single moment. This was a night for one captain to steal the spotlight from another captain.

It was pouring for the first pitch and no one was in their seats. But between innings the seats filled in very quickly because Jeter was leading off in the bottom of the 1st.  Jeter stuck out in his first at bat, and the fans ran for cover. I remained in my seat, as did most of the bleacher creatures. The crowd then returned for Jeter’s next at bat: he belted an opposite field single, in “Jeterian” fashion (as John Sterling would say). The whole stadium was standing even before he hit the ball.  As soon as the ball reached the outfield I jumped up and screamed. The crowd erupted in typical Yankee Stadium fashion, and Jeter stood at first base with 2,722 hits. 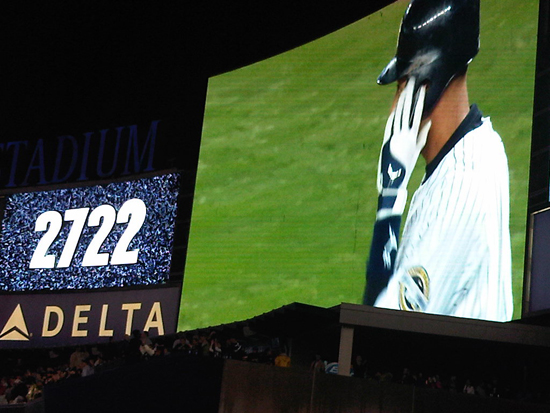 The whole team came out from the dugout to congratulate Jeter, and the Orioles were very respectful of this and waited patiently (I even saw one clap on the replay). On behalf of Yankees fans, I’d like to thank the Orioles for showing Jeter respect and for understanding the moment was not meant to show you up.
The crowd stood for every Jeter at bat after that, cheering, and chanting his name. It was a great experience that I wouldn’t have missed for anything. There have been a few games where I have been lucky enough to get to see history, and this was definitely one of my favorites. It was probably what Jeter had in mind at the last night in the old stadium about ‘building new memories’ at the new Stadium. 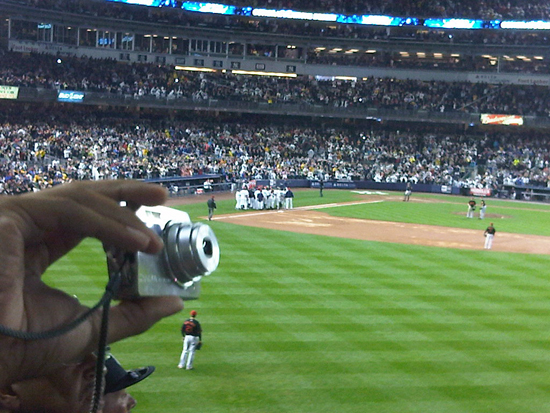 And so far it has been a great first season in the new stadium: between walk off wins, come from behind victories, Jeter chasing the record for all time hits, and Mariano getting his 500th career save (even if it did happen on the road). To put a cap on it, Jeter finally became the Yankees all time hits leader. 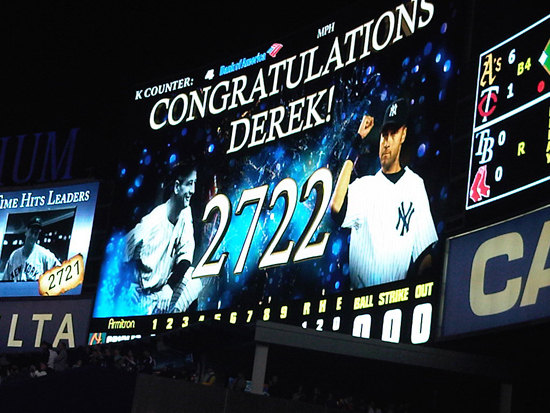 I don’t know about any of you guys, but I have a great feeling about the Yankees’ chances in the postseason and making the World Series. We have a very good group of guys who seem to have that chemistry we haven’t seen since the 90’s championship teams. I just purchased my postseason ticket package, which entitles me to my seats for every home playoff game. Hopefully, we’ll create one more new memory at our stadium by taking home a championship.