Here’s the Rookie Crop Hockey Fans Have Been Waiting For!

With NHL training camps set to open on September 12, the buzz over John Tavares and company has already started in hobby circles. If everything shakes out right, the 2009-10 NHL rookie class has the potential to become the hobby’s best since 2005-06 (Crosby, Ovechkin, etc.)

Upper Deck is thrilled to be the exclusive trading card partner to the NHL and we’ll have some amazing cards in the market for collectors this season of the top draft picks. Enjoy this first-look at the top ten rookies who hockey fans are looking to invest most heavily in during the 2009-10 season. 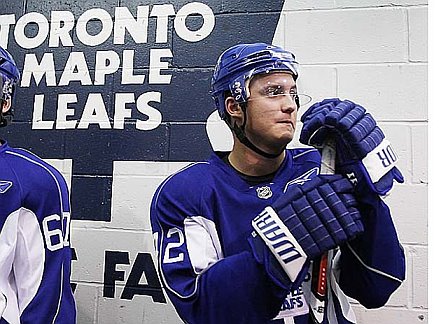 While it’s true that the Leafs’ roster will have something of a logjam at center when training camp opens later this month, one of the odds-on favorites to survive and win a regular-season roster spot is the 23-year-old Bozak.

The much-talked-about Saskatchewan native was pursued by no fewer than 20 NHL teams when he announced his intention to go pro last spring, but it was the Leafs – and their promise of immediate NHL ice time – who succeeded in inking the University of Denver star.

Bozak’s gritty, intelligent play should make him a key cog in Toronto’s rebuilding efforts and a fan favorite among Leafs Nation – a winning combination for collectors lucky enough to pull his rookie card from packs of 2009-10 Upper Deck products. 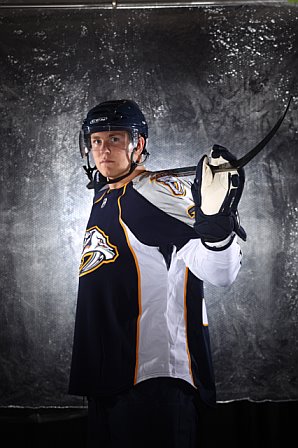 The latest in a long line of fantastic NHL prospects produced by Boston University, Wilson is considered one of the dark horses to challenge for the 2010 Calder Trophy.

The massively gifted, two-way center, chosen by the Predators with the seventh-overall pick in the 2008 NHL Draft, is expected to open the season in Nashville and push the team’s veteran centers for major ice time. Wilson’s size, speed, great hands and willingness to play in the defensive end should eventually translate into regular All-Star selections.

A solid start in 2009-10 will firmly position the 20-year-old phenom as a fixture in Nashville for years to come, and should place his rookie cards among the most desirable from this year’s class. 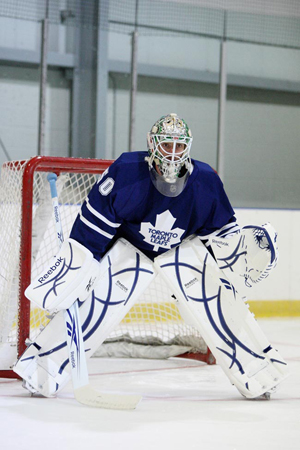 When a backup goalie is considered to be one of the season’s top 10 collectible rookies, it usually doesn’t bode well for the hobby. However, when that player was touted as “the best goalie outside the NHL” just months earlier, and when collectors on two continents are waiting to gobble up his cards, convention gets thrown out the window.

Gustavsson, a.k.a. “The Monster,” lands in Toronto as a rookie free agent in 2009-10 after a record-breaking career in the Swedish Elite League. The big, agile netminder will open the season as Vesa Toskala’s backup, but don’t expect that situation to last if the eye-popping scouting reports on Gustavsson are anywhere near accurate.

Should the 24-year-old take over as the Leafs’ starting netminder early this season, and lead Toronto’s resurgence in the standings, look for his cards to leap to the top of the hobby’s rookie hotlist. 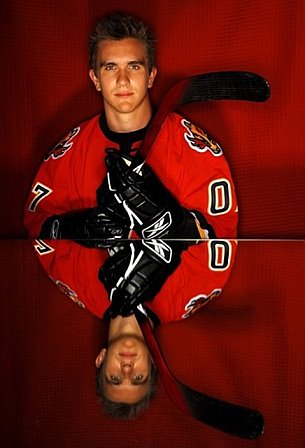 The 24th overall pick in the 2007 NHL Draft, Backlund made his debut late last season and immediately established himself as the type of speedy, playmaking center that Calgary has sought for several seasons.

With the Flames poised to challenge Detroit for Western Conference supremacy in 2009-10, the 20-year-old Swede should get every opportunity to make an impact in big games. Success in the spotlight, and Calgary’s rabid following in the hobby, should translate into considerable love from collectors. 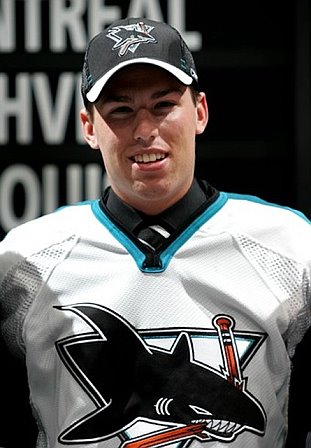 Trade rumors aside, the Sharks will likely look within their own organization for players who can get them to that elusive next level in 2009-10. Option 1A in the search will be Couture.

San Jose’s first pick (9th overall) in the 2007 NHL Draft, Couture complements his speed and good size with the type of fire, tenacity, and heart that can lead to a player wearing the “C” on his chest someday. If the former OHL standout can also approach the scoring totals he put up as a junior, the Sharks will have found themselves a future All-Star, and the hobby will have another impact rookie from the 2009-10 class. 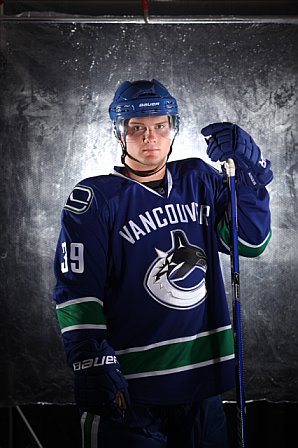 The 2008-09 Canadian Major Junior Player of the Year, Hodgson may someday become the face of the Vancouver franchise. Whether or not that day comes in 2009-10 will depend, to a great extent, on how well the hard-working, 19-year-old center performs in training camp this fall.

The 10th overall pick in the 2008 NHL Draft will have the opportunity to challenge for a regular spot with the offense-starved Canucks this season, but could just as easily wind up back with the Brampton Battalion of the WHL for one more year if things don’t pan out.

Whenever Hodgson cracks the Vancouver lineup, he’s sure to be an instant hit with collectors. Those of us in the hobby will just have to keep our fingers crossed that he arrives in 2009-10. 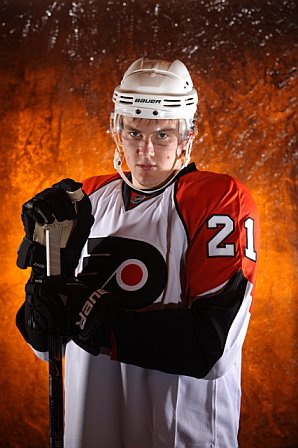 For Flyers’ fans, the last piece to the puzzle may have just arrived. The second-overall pick in the 2007 NHL Draft, Van Riemsdyk finally signed with Philadelphia this past April after spending the previous two seasons dominating Hockey East at the University of New Hampshire.

The thought of the big, physical, high-scoring left winger playing alongside Mike Richards and Jeff Carter is an unsettling one for the Flyers’ rivals as the new “Broad Street Bullies” set their sights on unseating Pittsburgh atop the Eastern Conference in 2009-10.

Van Riemsdyk’s considerable offensive skills and nasty edge will make him an instant fan favorite in Philadelphia and, coupled with the young Flyers’ continued rise to prominence in the East, he stands to be hobby dynamite for years to come. 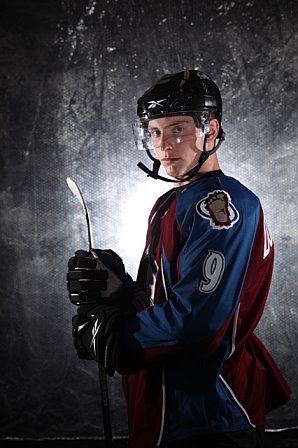 There were some in NHL circles who felt that Duchene – not John Tavares – was the best-overall forward available in the 2009 Draft. The speedy, two-way center possesses both a goal scorer’s hands and the grit of a checking-line power forward. Think of Steve Yzerman in his prime.

In a stroke of irony, the 18-year-old Joe Sakic collector and Avs fan was chosen by Colorado with the third-overall pick in this year’s draft and will now get the chance to play for the team he grew up following.

While it’s still unclear whether or not Duchene will actually play in the NHL in 2009-10 (he still has two years of eligibility remaining in the CHL), it is clear that he’ll be a hobby force as soon as he arrives. If he makes the Avs’ roster out of camp, he’ll team with Tavares and Hedman to form the core of the hobby’s best rookie crop since the legendary 2005-06 class. 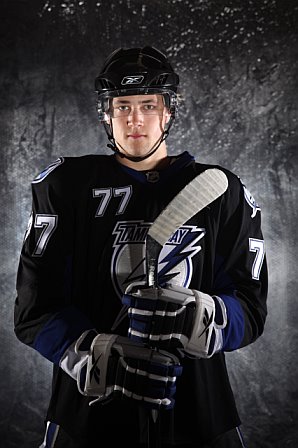 A combination of size and speed the likes of which the NHL has never seen in a defenseman, the 6’ 6” Hedman is expected to start immediately and, quite possibly, challenge for the Calder Trophy with the Lightning in 2009-10.

As a teenager over the past two seasons, the second-overall pick in the 2009 NHL Draft dominated against older, professional players in the Swedish Elite League and drew comparisons to countryman (and perennial Norris Trophy winner) Nicklas Lidstrom.

While it’s true that collectors usually don’t give much hobby love to defensemen, Hedman is the type of once-in-a-generation talent that could buck that trend. An Opening Night debut with Tampa Bay will guarantee that the big Swede’s first RCs appear in 2009-10 Upper Deck Series One. 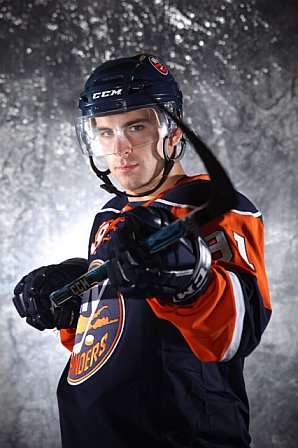 The first-overall pick in the 2009 Draft, Tavares enters the NHL this season as one of the most-hyped rookies in league history. The 18-year-old center is often compared by scouts to a young Phil Esposito because of his phenomenal hands and knack for creating scoring chances from the slot on almost every shift.

Tavares’ hobby impact may not match that of Sidney Crosby’s from 2005-06, but it should be the next best thing. Assuming that he plays with the Islanders on Opening Night (and there’s no reason to think he won’t), his first in-pack rookie cards will appear in 2009-10 Upper Deck Series One in November.