Last February, inside its 2009 Upper Deck Series One Baseball product, Upper Deck released a nine-card insert set entitled: “Historic First Predictors.” The sports card giant made nine bold predictions for 2009 and stated that if any of them came true during the course of the year that it would do “something big.” 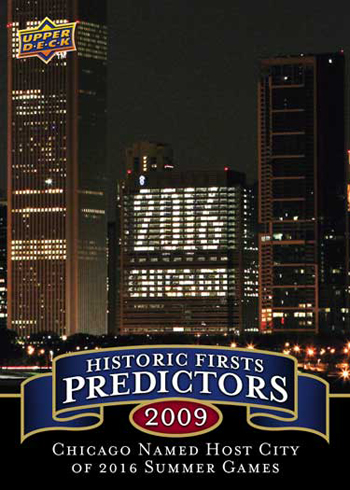 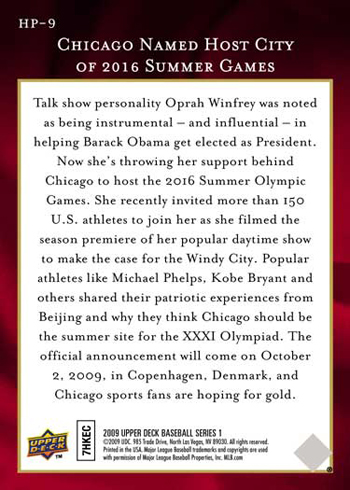 Well, something big is nearly upon us – again. On Friday, Oct. 2, International Olympic Committee members will choose the host city of the 2016 Summer Games. Convening in Copenhagen, they’ll pick from four finalists: Chicago, Madrid, Rio de Janeiro and Tokyo. Stemming from the results, Upper Deck is ready to put into motion a special nationwide promotion that would yield a free baseball card pack to fans across the country (one per customer, while supplies last), provided Chicago is named the host city. That’s right, because Upper Deck put the prediction out there and said it would do something big if Chitown gets selected. And “big” means providing packs of Upper Deck baseball cards to fans across the nation, but only if President Barack Obama and company can help convince the IOC to go with Chicago. (The President and First Lady are both flying to Copenhagen to lobby for Chicago’s selection.)

Two months ago, the National League All-Stars failed to emerge victorious in Major League Baseball’s Mid-Summer Classic in July, which was one of Upper Deck’s other “Historic First Predictors” inserts. But this week, the Windy City could learn that it will be hosting an Olympian effort seven years from now. Stay tuned.