Each month Upper Deck will spotlight one of our hobby retailing partners and some reasons why you need to visit their store. People in North Carolina are passionate about their sports and so is our Retailer of the Month. 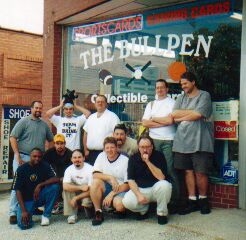 Here are just some of Steve's loyal patrons.

The Bullpen was started by Steve James, whose childhood dream was to pitch for the Chicago Cubs. After a promising Little League career, he failed to make the baseball team in high school. However, his passion for sports could not be doused that easily; so Steve volunteered in the athletic trainer’s office. Steve thought sports medicine could be the route to go until college, where he found out how squeamish he was around blood.

So Steve ended up getting married, had a child, and took a 9-5 job to support his family. When his son was in first grade, his dream was renewed when one day after school his son asked, “Dad, can we stop by the store and get some packs of baseball cards?”

Steve James - Owner of The Bullpen

Steve was elated as they were able to develop a special relationship collecting together. Eventually they expanded from baseball cards into football, basketball and hockey cards as well. After setting up at a card show to get rid of some of their duplicates, Steve realized he could make money in the hobby he had grown to love.

“We eventually found a storefront to rent, moved in all our inventory of cards from the show to the newly founded Bullpen and the rest as they say is history,” said Steve. “Here I was, finally working in sports. Dreams really do come true!”

That was eighteen years ago and Steve James and the Bullpen are still going strong. Steve attributes his successes in this economy to being very service oriented and making the Bullpen a fun place to hang out.

“We bring in local athletes to the store for signing sessions,” said Steve James. “Customers tell me they have the most fun winning prizes and interacting with other collectors during our various events and promotions. We do one big promotion every month and sometimes more. We do events that most people know about like pack wars and then a special event like the Big League Blast.” 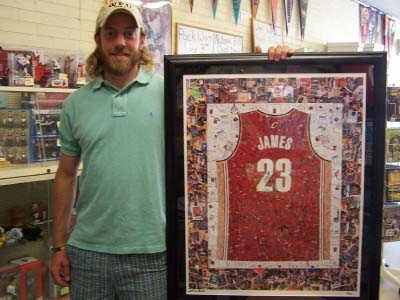 A prize from one of the events at The Bullpen.

Shops have pack war events where you used the stats on the back of cards to win prizes. Steve makes sure that everyone walks out a winner. The Big League Blast is a special promotion through Major League Baseball where they raffle off a variety of great prizes. Then there are other promotions he has come up with to keep things fresh, like playing “Deal or No Deal” in the shop.

“What do sports fans need to see at our store? We have over three million sports cards on site and they are sorted in a way that no matter how obscure, we can find you that player within five minutes. Don’t believe me? Come down to see it in person.” 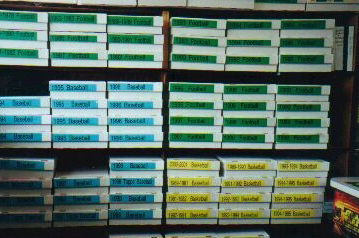 A view of the sortable collection Steve has amassed at The Bullpen.

Steve has been doing this long enough to know how to take care of a customer and to make a visit worthwhile. If you are in the North Carolina area, make a point to stop by the Bullpen. 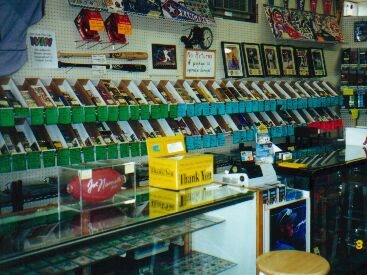 The Bullpen keeps plenty of new and vintage trading card products on hand.


I always watch Deal or No Deal on TV, what an exciting show and i love the briefcase girls too.:”,