On Wednesday, August 26, the Hershey Centre in Mississauga, Ontario – normally a launching pad for up-and-coming skaters and Canadian Juniors from the local area – was transformed into the site of Upper Deck’s inaugural NHL Rookie Debut Photo Shoot. Much like previous Upper Deck rookie shoots with top talent entering either the NBA or NFL, this week’s hockey version sported the best of the best of the NHL’s finest youngsters prepping to make their on-ice debuts in the coming months as professional hockey players. As the NHL’s sole producer of hockey trading cards since 2005, this was a unique opportunity long overdue. John Tavares, the No. 1 overall selection by the New York Islanders from the 2009 NHL Entry Draft, was on hand as was the likes of Swedish Elite League Rookie of the Year Victor Hedman (No. 2 pick, Tampa Bay) and slick stick handler Matt Duchene (No. 3 pick, Colorado). 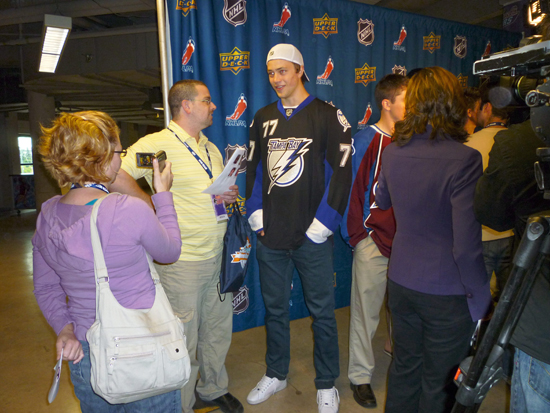 Victor Hedman of the Tampa Bay Lightning greets the press.

This was Upper Deck’s first chance to capture the players (14 in all) sporting their new NHL team uniforms in a variety of poses and scenes, including some candid video footage that will make its way to YouTube in the coming days. The players were enthusiastic, accommodating and eager to please. They went through a total of four “stations” set up by the creative forces at Upper Deck including on-ice action; portraits; the memorabilia signing station; and the aforementioned video station where the players laughed hard and received their “rookie boot camp” initiation on everything from how to properly sign hockey trading cards to the correct way to lace up their skates and tape their sticks. The hockey coach/drill instructor employed by Upper Deck for the shoot was Andrew Long, a 28-year-old aspiring actor from southern California who went by the stage name of “Ron Cherry” for the taping. 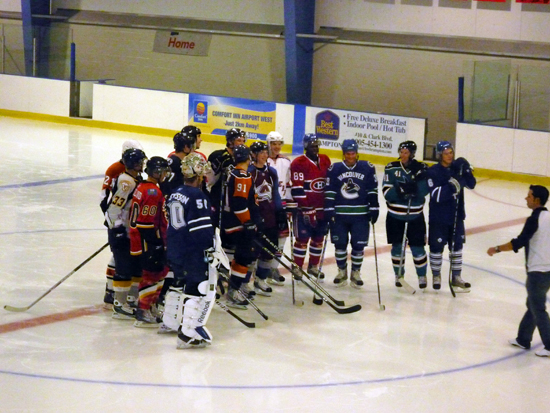 On-Ice Station: All 14 of the participating rookies listen for instruction at Station No. 1.

As an added incentive, Upper Deck dangled an autographed LeBron James Cleveland Cavaliers jersey (courtesy of Upper Deck Authenticated) as a top prize to be awarded to the player who showed the most enthusiasm during the video tapings. Although trick shots, celebratory skating and even on-ice hip-checks delivered to Upper Deck’s official mascot (“Coach Cardman”) were part of the mix, the player having the most fun throughout the day would walk home with the away jersey signed by the NBA’s reigning MVP who just happens to double as an exclusive autograph signer for Upper Deck. 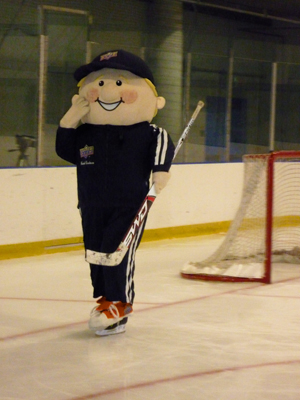 Coach Cardman hits the ice at the Hershey Centre.

Following a good night’s sleep at the Westin Harbour Castle, Upper Deck shuttled the players to the Hershey Centre where they quickly donned their new teams’ jerseys for a 60-minute media “scrum” from 9:30 to 10:30 a.m. where more than 25 members of the Canadian press (TV, radio, online and print) put the rookies through a gauntlet of questions and interviews regarding their on-ice careers as well as the day’s fast-approaching photo shoot for their first-ever Upper Deck trading cards. Excitement defined the mood as Canada’s sports leader TSN (The Sports Network) covered the event, along with reporters, photographers and Bloggers from the Toronto Star, Toronto Sun, Reuters, Rogers Sportsnet, and The Hockey News.

After the media interviews, the players retreated into the locker room to get into pads and equipment for the day’s photo shoot. At 11 a.m., the event was underway. Group No. 1 included Tavares, Hedman, Duchene and Cody Hodgson. While they attacked the on-ice photo station, Group No. 2 (Mikael Backlund, Tyler Bozak, Jonas “The Monster” Gustavsson and Jared Cowen) got up-close and personal with Coach Cherry at the video station. (As an ironic side note, hockey Hall of Famer Don Cherry was actually in attendance for a short while at the Hershey Centre, where he chatted it up with many of the rookies. Efforts to recruit the hockey icon as part of our video scheme, however, came up empty.) Group No. 3 consisted of James Van Riemsdyk, Colin Wilson and Bobby Sanguinetti, who posed for their portrait shots. The fourth group was P.K. Subban, Eric Tangradi and Logan Couture, who got their first dose of an orchestrated autograph session as they signed hundreds of signatures for the hockey card leader. 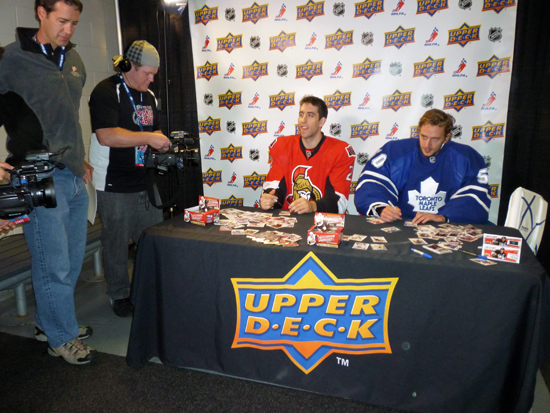 Jared Cowen and Jonas Gustavsson show their acting chops during the video portion.

Each station lasted approximately 60 minutes long, so the players simply moved on to the next station once their session was complete. With a sit-down lunch sandwiched between the second and third stations, the players were primed and ready to attack the remaining day’s duties.

As part of the video portion of the day’s activities, the players were asked to demonstrate a skating celebration they might employ after scoring a lamp-lighter in the NHL. Backlund, who will now be skating for the Calgary Flames, showed a unique “moon-skate” dance (think Michael Jackson), while Cowen – drafted by the Ottawa Senators – showed a nice Vegas-style crap roll after putting the puck in the net.

Each of the players showed plenty of zest for their newfound hockey opportunity, but no one was more animated throughout the day than Subban, a defenseman taken by the Montreal Canadiens. His laughter, energy and enthusiasm were infectious and as the event came to a close, the Upper Deck crew picked their winner: Subban! 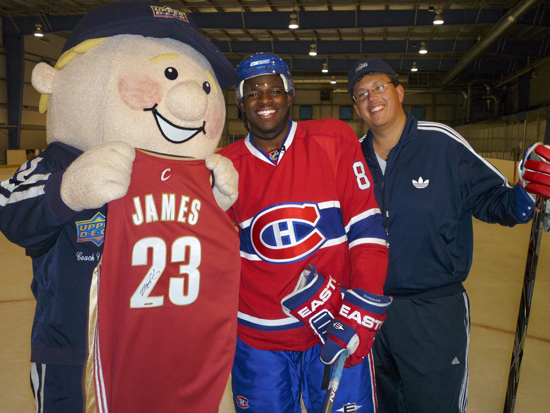 “It’s my brother’s birthday next week and he’s a huge LeBron James fan, so the timing couldn’t be better,” said Subban. “I just want to say thanks to Upper Deck for putting this event on today and for letting me walk away with this jersey.”

Josh Zusman, Upper Deck’s Hockey brand manager, summed up the day’s event this way: “The inaugural NHL Rookie Photo Shoot was asmashing success. With 14 of the top rookies, 25 media outlets and some great momentum, we have created hype that will carry us into the season and beyond!” 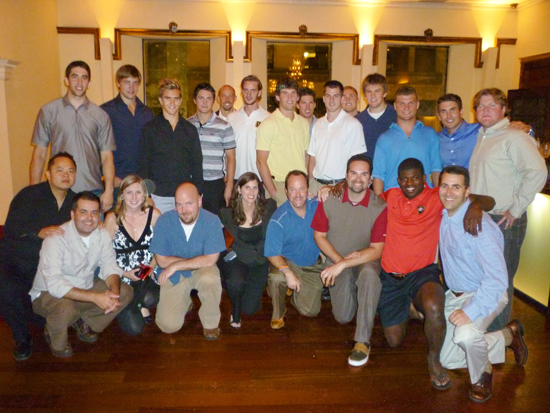 
Can’t wait for the videos.

You mind emailing me when it’s ready?


[…] This is a picture of Richard from the 2007 NHL Young Stars Game, giving the MVP trophy to Zach Parise. As you may know, Upper Deck has the exclusive for NHL trading cards, and rookies in the league are a big focus for collectors. For that reason, we pay extra attention to the rookie class with events like the NHL Rookie Debut Photo Shoot back in August. […]