Collector of the Month: A Family Hockey Collection

Each month Upper Deck will spotlight one of our valued collectors to showcase their collection. The great thing about sports collectors is that they are all very different in what they collect, how they collect items and what they do once they have them. This month we spend some time with a family that set out to do what many would perceive as the impossible. Meet Steph Felx, Regent Felx and Maryse Grignon from Montreal, Quebec.

“My family and I have been investing in a master collection hockey cards project of which could be described as somewhat unique and probably statistically almost impossible to complete,” said Maryse. 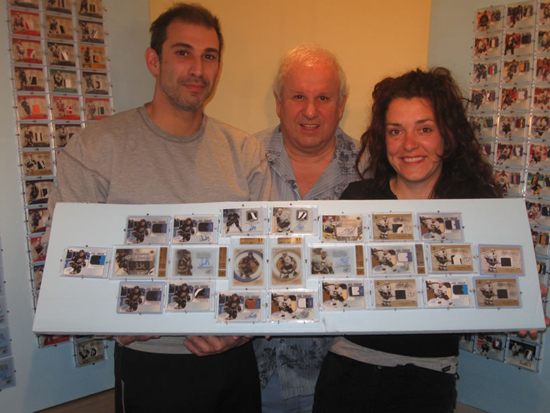 “My father-in-law Regent has been a die-hard hockey card collector all his life. He initiated his son Steph when he was 8 years old to collect hockey cards. Anyone who has ever been to Montreal knows that the Canadiens are almost a religion here because of the team’s lengthy history and significance in Quebec. The sweaters have even been referred to as ‘La Sainte-Flanelle’ (the holy flannel sweaters). Collecting hockey cards has always been a great way to own something from our hometown players that we treasure.”

“The Felx family lived only a few doors away from the great Penguins’ principal owner Mario Lemieux’s family house in Ville-Émard. Being almost the same age as Mario growing up, Steph and his friends had the chance to play hockey in the backstreets with him and watch hockey games in the basement of the Lemieux’s house. Mario’s mother would set this up for the kids when certain games were not on the local channels!”

“Years later after Steph and I had married, during the 2006 holiday season, Steph and his father decided to start collecting the 2005-06 Upper Deck Ice collection together. They picked this particular master collection because it features eye catching signature acetate patch cards and because they felt it included some of the best looking cards that year. The acetate autographs marked a milestone in the hockey card industry, being that no other set has ever featured patch card versions of acetate autographs.”

“The 2005-06 Upper Deck Ice Hockey is particularly interesting because it is the year after the NHL Lockout and so the set is jam packed with two years of top rookies like Crosby, Ovechkin, Ward, Vanek, Phaneuf, Brule, Lundqvist, Carter, Richards, Getzlaf and many more. There are also a variety of rare cards signed by Gretzky, Roy and more.” 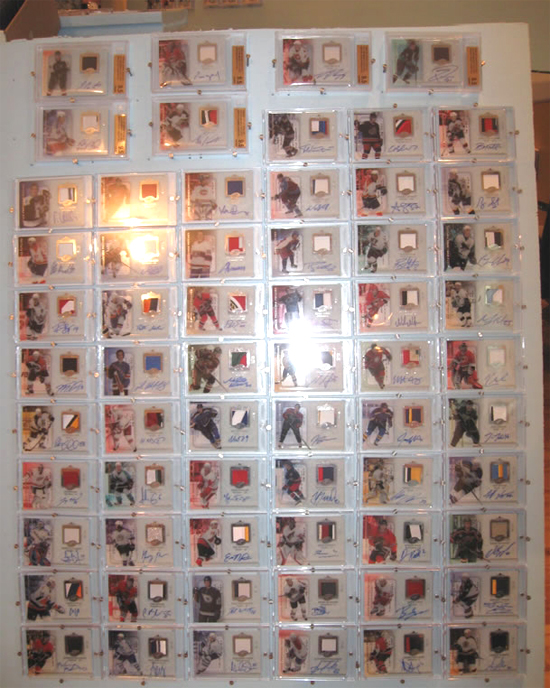 “We have invested tons of money and more than 3 years to develop this master set puzzle of 1028 cards when almost 70% of the cards have serial numbers out of /10, 15/, 35, 50, and so on. We experienced challenges when some of the single cards value skyrocketed up to $7000 on auction sites like eBay. It has been an intense treasure hunt to locate each precious card that has mixed frustration and great thrills together and through it all, most of the time people were telling us that we were crazy and would never finish it.”

“With Steph and Regent not being very computer savvy, I was recruited as the eBay agent! At the time we had no idea what we were getting ourselves into (financially, time-wise etc.), but this hobby became a fun part of our cold winter nights where we were hunting down cards on the internet. We tried different strategies like buying boxes and going to sports cards shows, but we needed eBay in order to find cards from sellers all over the world.” 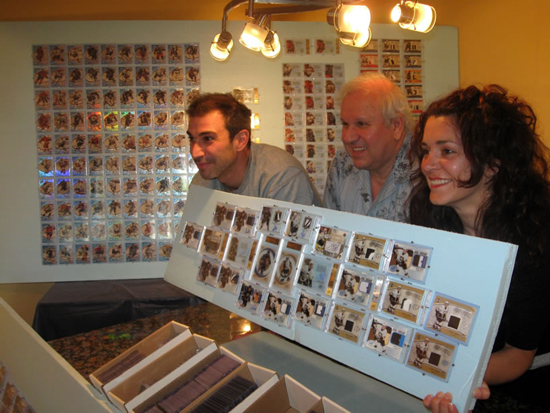 “We knew there was a possibility that we would never finish the collection, but we would motivate each other not to give up and to keep the faith. Once we had only ten cards missing, the excitement grew. I don’t think you can fully understand the thrill we felt when we received the last card missing from Canada Post! It has truly been a great family hobby that has brought us all closer.”

I inquired with Maryse if they would ever consider selling such a rare collection and she indicated that they would really have to think about it. It’s obvious they formed a great bond over that set, but maybe they are looking to take on another challenge of compiling another master collection in 2009/10. Contact information should you have any questions for Maryse and more images of their set are available below:

Those cards look great together like that. Question: What are they mounted on and how are they affixed to the boards?

Congratulations! I am impressed!

Thanks Jeremy, they are mounted of wall foam and resting on nails on all sides.

This is a beautiful collection. My husand started back in 1989, he bid on a box full of cards at an auction. He gave a lot of the cards to children that loved hockey. He has since passed and I am still a Penguins fan. Have two toy poodles, one I named Lemieux. If you know of anyone interested I have at least 2 or 3 hundred cards left. You did a very good job. annalee123@comcast.net