Today’s NFL is like the pop music top 40 — it’s always changing. Teams want to win now, and they will fill in whatever pieces they think are necessary to get to the Super Bowl.

This Wall Street-like action makes for interesting headlines in the off-season, but many moves, whether by free agency or trade, just don’t put teams on a direct path to the Super Bowl like they would have hoped. However, some teams come out looking like geniuses (Patriots-Randy Moss, 2007).

Here are some of this off-seasons biggest swaps and signings as the 2009 NFL season starts to take shape. We’ll look at how each move went down and examine who’s most affected (good or bad).

Jay Cutler
From: Broncos
To: Bears

Rewind to three years ago, and Jay Cutler was the third-best quarterback available in one of the most hyped rookie classes in years. Vince Young and Matt Leinart were the coveted future superstars. Since then Cutler has thrown for more yards and touchdowns than Young and Leinart combined. In 2008, his 4,526 yards passing were third most in the league, but his 18 interceptions were second only to Brett Favre’s 22.

Cutler’s ability to rack up fantasy football numbers made him arguably the most attractive commodity this off-season, even though he wasn’t a free agent. Denver’s interest in former Patriots quarterback Matt Cassel this off-season was just another jab in Cutler’s mind, and he quickly made it known that he wanted out of the Mile High City. By March, the Broncos decided to cut ties and traded Cutler to Chicago for Kyle Orton and draft picks.

Cutler gives the Bears something they haven’t seen in, well, decades. The team has ridden the QB carousel so much that they’re finally out of quarters. But now, they finally have a big arm to go along with speed at receiver, which could unclog things for second-year running back Matt Forte.

Who’s Affected: Devin Hester (+): Watch for Hester to get even more down-field looks in 2009.
Matt Forte (+): He had more than 1,700 total yards in 2008, but could get that much on rushing alone this season if the passing game spreads the field.
Greg Olsen (+): The big tight end will keep defensive coverage busy in the middle, helping the wideouts on long routes. 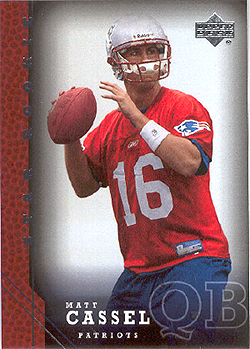 Matt Cassel
From: Patriots
To: Chiefs

When Tom Brady shredded his knee in Week 1 last season and was out for the year, it was time for Matt Cassel to do something he hadn’t done since high school: start a football game at quarterback.

Cassel spent his college days at USC behind Carson Palmer and Matt Leinart. Then he entered the NFL and got stuck behind its most successful quarterback of the decade in Brady. But like all players who dream of getting their shot to stand out, Cassel got his. He started 15 games (winning 10 of them), and passed for 3,693 and 21 TDs. The Patriots franchised him after the 2008 season, and the Cassel sweepstakes was underway.

The Chiefs came out on top, trading a second-round pick to the Pats. Cassel joins the NFL’s 20th-worst passing offense, minus Tony Gonzalez, and K.C. has more issues than just a hole at QB. He might find that crossing the goal line is a little tougher without Randy Moss and Wes Welker.

Who’s Affected: Dwayne Bowe (+): He put together his first 1,000-yard season last year and should rack up more yards in 2009.
Tyler Thigpen and Brodie Croyle (-): Once considered for the future behind center, these two will have to watch from the sidelines, but don’t be surprised if they see some meaningful time in 2009.

Albert Haynesworth
From: Titans
To: Redskins

The Tennessee big’n totaled 8.5 sacks and 51 tackles in 2008, making him the most high-profile free agent of the off-season. It’s no surprise that Washington threw the most dollars at Haynesworth — 100 million to be exact.

The Redskins were actually one of the top defenses in the league last season, ranking fourth and sixth in yards and points allowed, respectively. Pass rushing should get even fiercer with Haynesworth, in a division that includes Tony Romo, Eli Manning and Donovan McNabb.

Who’s Affected: London Fletcher (+): Still going strong after 11 seasons, Fletcher should have even more room to roam, as offensive linemen will be tangling with Haynesworth up front.
Carlos Rogers, Fred Smoot and DeAngelo Hall (+): The impressive DB group should be able to jam receivers more if the pass rush up front is giving QBs fits, forcing them to throw quicker.

Terrell Owens
From: Cowboys
To: Bills

A 12-year playoff win drought. A one-for-four December. A chemistry-killing receiver. Those things don’t cut it for Cowboys fans longing for the ’70s and ’90s. The result was Terrell Owens being shown the door. But it didn’t take long for him to find his fourth NFL home.

The Bills picking up T.O. is perhaps more of publicity move than an honest attempt to bolster the offense. Buffalo does need help moving the ball, however, finishing 23rd in points and 22nd in passing yards. Owens will provide another deep threat, but Lee Evans has been that tool. However, Owens can give the Bills something they don’t have — a big, strong pass grabber who will be a great target in the red zone.

Owens still has the talent, but will he let young Trent Edwards lead the offense? Will Lee Evans be cool with sharing catches? Same questions. New team.

Who’s Affected: Trent Edwards (-): Edwards doesn’t have the arm to force the ball to Owens. So, if Owens starts crying for the ball again, and Edwards tries to appease him, watch the INT meter climb.
Lee Evans (+): If Owens can occupy the middle on some plays that allow Evens to streak on the outside, Evans could see more deep-ball catches.
Marshawn Lynch (+): With Evans and Owens keeping everyone busy downfield, Lynch could have a lot more breathing room. Expect his receiving numbers to rise. 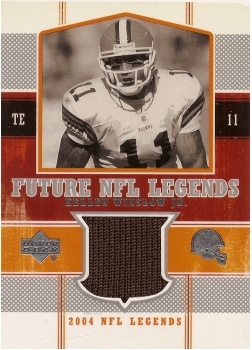 Kellen Winslow Jr.
From: Browns
To: Buccaneers
A former top-10 draft pick, Kellen Winslow Jr. was swapped to the Buccaneers for the Browns’ 2009 second-round pick. The athletic tight end played just eight games last season, but put up a 1,000-yard receiving season in 2007. The Buccs got just 397 yards from tight end Jerramy Stevens last year. Winslow provides an experienced target that can stretch the field and move the chains.

Tampa Bay’s quarterback position is a huge question mark. Jeff Garcia is now in Oakland, and the Buccs are left with a gaggle of career back-ups, but someone has to start. This certainly could be bad for Winslow, but a below-average QB’s best friend is a solid, reliable tight end.

Who’s Affected: Whoever Stars at QB (+): It could be a carousel ride in the Buccaneer backfield, but maybe Winslow can establish a connection with one of the QBs.
Antonio Bryant (+): Bryant surprised the team with a 1,200-yard, seven-touchdown season last year. Defenses will be ready in 2009, but perhaps Winslow will draw attention away from Bryant.

Tony Gonzalez
From: Chiefs
To: Falcons

He’s 33 years old and spent 12 years with the Kansas City Chiefs. 2008 was arguably his most productive year, catching 96 passes for 1,058 yards and 10 touchdowns. And he did it catching passes from three different quarterbacks.

After setting the all-time yardage record by a tight end last year, Gonzalez was shipped to Atlanta for a second-round pick. Most players are winding down their careers at this point, but Gonzalez is eyeing a Super Bowl win — just about the only thing he hasn’t accomplished in his career.

He joins 2008 Offensive Rookie of the Year Matt Ryan and should give the young QB an effective weapon to go along with receiver Roddy White and runner Michael Turner. Reliable tight ends can be a young QB’s best friend. Gonzalez could be the final piece that allows Atlanta to make a legitimate push for a championship.

Who’s Affected: Matt Ryan (+): Falcons TE Justin Peelle had just 159 yards receiving last season, but Ryan will be able to spread the ball more and make defenses divide coverage.
Roddy White (-): White should still get 1,000 yards, but he may not have as productive of a season like he did in 2008.
Michael Turner (+): Gonzalez is a solid blocker, which will give Turner more confidence running around the end.

With training camps starting up all over the country in the following weeks, fans will be getting a first look at their new stars. Will they help set the team on track for a championship? Or will the preseason anticipation turn into December disappointment? Fans are gitty, and at least they have that for now.


The Falcons made out the best of all those teams. Gonzalez will thrive in Atlanta.