Admittedly, I got a little enthusiastic last week, posting my analysis of this year’s All-Star game before the starting lineups were posted. What can I say, it’s been many years since my National League won, and I’m thinking we may finally be able to do it this time around. And as I’m sure you’ve heard, there are free Upper Deck packs at stake this year as well. Pitchers have been announced, lineups have been posted, and here’s what it’ll look like tonight: 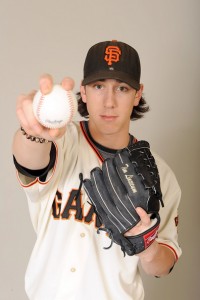 I love the showcase with the two starting pitchers in this game: Lincecum vs. Halladay. The Freak vs. The Professional. The stark contrast between these two couldn’t be bigger, and I love it.

Lincecum looks like an unassuming, mild-mannered kid who would get carded whenever he went to a bar, if not for the fact that he’s famous. With his skinny frame and moppy hair, he looks more like a gas station attendant or Olive Garden waiter than a big league pitcher. But then the kid goes to the mound, picks up the baseball, and with that strange delivery something magical happens. He’s just an absolute monster, but doesn’t look anything like one.

And then you’ve got Halladay: the consummate professional, who studies opposing hitters with remarkable discipline, grinds out 200 IP seasons like clockwork, and has a name that’s synonymous with complete games. And when he won the Cy Young in 2003, Lincecum was nineteen years old, and pitching for the University of Washington. So you’ve got the kid against the veteran, and that dynamic should be a thrill to watch while it lasts (before the other pitchers start to rotate in).

For the start of the game, I think the National League’s #1-#4 hitters are absolutely deadly, and David Wright performs well in the All-Star Game too. Considering Ibanez is only coming back to health right now and will be subbed for quickly, I would have batted him second, and put Utley fifth where he could do more damage in a key RBI spot. But what do I know, Charlie Manuel manages all these guys every day. What I do know is that we need Ibanez out of there quickly, if for nothing else than to make the outfield defense a little better.

The top of the AL lineup looks to have a bit less pop, with career high average hitters Ichiro and Jeter up top, and it’s still a bit weird to think of Mauer now being a power hitter. Again, I’m assuming Longoria is batting this far down in the lineup because they fully plan on pulling Hamilton after the first two innings, replacing him with a more capable center fielder (and one who isn’t just coming back from an injury).

So for the first few innings, the National League needs to get some guys on, and hopefully put one over the wall. Oddly enough, with the way their lineup is constructed, the AL seems more likely to manufacture a run. I know if I was calling the shots, I’d tell Ichiro or Jeter to look to steal a bag on Lincecum if they get on, as Mauer and Teixeira are perfectly capable of shortening up and going for that single to drive in a run.

Beyond that, the middle of the game is hard to predict, because we don’t know much because of how many substitutions occur. We do know that the last three innings for the American League are likely to be pitched by Nathan, Papelbon and Rivera, which means the National League needs to play some urgent baseball for the first six frames. Based on starting lineups alone, I really like the National League’s chances, and would feel even more confident if not for the revolving door at the positions.

The biggest question of the game, really, is what Charlie Manuel is going to do with Albert Pujols. Under most competitive circumstances, you want to keep The Best Hitter in Baseball in the game as long as you can. Throw into the mix the fact that they’re in front of Albert’s hometown fans in St. Louis, and Cardinals fans along with National League diehards are going to hope he stays at first base as long as possible.

The problem is, the National League lineup has a bench filled with star first basemen, including Prince Fielder, Adrian Gonzalez, and most importantly, Manuel’s own Ryan Howard. Manuel has implied that he’ll be looking to sub for Pujols, and given that he’s playing Shane Victorino in center field over Justin Upton, I have to think Howard gets in there for an inning or two. No knock on Howard as a player, but if the ultimate goal is to win, I keep Pujols out there for the whole thing, and save Howard as a key weapon off the bench.

On this subject, I’ll conclude with a bit of staggering irony that is probably being lost today on all but the most geekish baseball fans who remember this stuff (this is me sheepishly standing up with my hand raised):

If you’ll remember the 2007 All-Star Game, it was Aaron Rowand getting the last at bat in the game at a critical moment, when the National League had the bases loaded, two outs in the ninth, and could have brought home a win with a hit. Along with the rest of the National League faithful, I remember cursing at my television that it was time for NL manager Tony LaRussa to finally bring in Albert Pujols to take that critical, last at bat. But he didn’t, and The Best Hitter In Baseball never got into the game. Rowand flies out, game over, and the Boston Red Sox go on to take home field advantage and win the World Series.

Now, to make this very clear, at the time and as is still the case, Tony LaRussa manages Albert Pujols at his day job with the Cardinals. Whatever triggered his decision to keep Albert on the bench in 2007 is beyond me, but one thing is clear: he wasn’t playing favorites, or looking to get “his guy” in.

And tonight, everything comes full circle in that regard. Charlie Manuel is managing the team, and Pujols will at least get to play, because he’s starting at home. While he’s at it, Manuel shouldn’t play favorites with Howard, and keep Pujols in as long as possible. If LaRussa could make that kind of statement with “his guy”, Manuel can do the same with Ryan Howard, especially for the hometown St. Louis fans.

Most importantly, the Phillies and Cardinals are both looking good for a playoff run this year, and could use that World Series home field advantage. So futile as it may be, I’m hoping Manuel does the right thing and you know, gives his team the best chance to win, instead of trying to showcase his own Phillies.

There are free packs on the line too. Let’s please do this one the right way, and try to win.

Hometown hero choked, just like he did to my boy Prince in the derby.

And St. Louis is not a great baseball town. Just flyover country.


[…] mentioned it before the game, and it played out just as I predicted: the American League was playing a six inning game. When you can end with Papelbon, Nathan and […]