Fans love knowing that the players they follow are genuinely nice people, or at least try hard to be. The irony is that some pro athletes get so much media coverage for their athletic accomplishments, but their real personalities rarely get to shine.

I have been fortunate to meet and interview more than 200 professional athletes over the years, mostly from the NFL. Some are as you might expect—uninterested, and issuing as many short answers as they can come up with. But I’ve also come across plenty who have been remarkably friendly and as accommodating.

Some of you can probably relate. You’ve had the chance to meet a player you’ve been following for years. Maybe he was cooler than you ever imagined. Maybe he was a jerk for whatever reason. Either experience can greatly affect your opinion of him, and how closely you’ll continue to follow him.

It’s always refreshing talking to a player who seems to be interested in meeting you. A handful stand out as the nicest and friendliest players I’ve ever met: here’s a recap of some of my experiences with them. 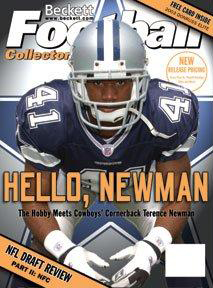 When I introduced myself to Newman (a.k.a. T-New), I told him I was from Dallas and was glad that the Cowboys picked him. We just sat down and talked a bit about the Cowboys and playing his college ball in the Big 12.

Newman is a really funny guy. We were at the NFL Rookie Premiere Photo Shoot and he’d grab the photographers’ cameras and start taking his own pictures of other players.

He posed for a quick, impromptu photo shoot for the cover Beckett Football—the magazine I was covering the event for. He wasn’t being paid any extra for it, and he wasn’t contracted to do it. But he was more than willing and accommodating.

Several weeks later, when the magazine was printed with him on the cover, he even signed several copies for us to show his appreciation.

As a life-long Texas Longhorns fan, I used to have a respectful distain for Adrian Peterson. Before I met him, I had this vision of a cocky, entitled superstar.

I was completely wrong.

Physically, my first impression of Peterson was just as I’d expected—a lean, rock-solid natural athlete. In fact, when I shook his hand, he squeezed my knuckles like they were cotton balls. He truly doesn’t know his own strength. It made me feel about a foot tall.

But Peterson has a very inviting disposition—as if he’s comfortable with anything you throw at him. He was constantly smiling every time I looked over at him. He was more than happy to pose for a couple pictures with a copy of Beckett Football with him on the cover.

It’s always cool to see a personality like Peterson taking over the league. The guy as rushed for more than 3,000 yards and 22 touchdowns in just two seasons. No doubt, he’s added a ton of fans to his crowded bandwagon: those fans can rest knowing that Peterson is a kind-hearted guy who absolutely loves football. 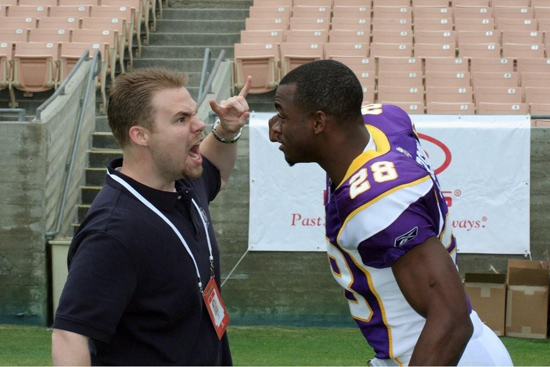 Matt Ryan takes home the Mr. Nice Guy trophy. In fact, he was almost too nice.

Ryan was a rookie when I interviewed him, and at first he seemed more like a church youth minister than an NFL quarterback. He was kind of thin and baby-faced, but I could tell he was smart and confident in a Peyton Manning sort of way. You can tell when a player is really listening to what you are saying to them when they start talking to you in more of a conversational tone, instead of just answering questions you are firing off. Such was the case with Ryan.

About halfway through our interview, Ryan had to be at another spot at the event we were at, but he insisted that I walk with him to finish the interview. So I did. I could tell he was trying his best to listen closely to my questions and answer them with as much detail as he could.

A couple of days later it was announced that Ryan had signed a six-year, $72 million contract with the Falcons. Maybe that’s why he was in such a good mood. Either way, Ryan is on to a great start to his career, having led his team to the playoffs in his rookie year. Heck, his first pass in the NFL went for a touchdown. It’s great to see a guy like him having such early success.

Willis was a beast in the SEC for Mississippi. I’ve asked several former SEC offensive players to name the toughest player they’ve ever had to face, and many of them named Willis. He led the NFL in tackles his rookie year (2007) and was second last year.

As dominating as he’s already become, when I met him, talking to Willis was like talking to an old friend I hadn’t seen in years. He also was one of the more conversational players I’ve ever interviewed. He went on and on about his approach to the game and what he needs to get better at. I could tell right away that there was no way Patrick Willis was going to fail in the NFL. If he was a stock, I would have bought all I could. He was one of those rare athletes that you just want to get to know more about on a personal level.

Clark is possibly the most down-to-earth player I’ve ever come across. He instantly struck me as someone who does not belong among the superstar Hollywood-persona athletes. He had this overwhelming awe about actually being in the NFL. He’s more shy farm boy than Pro Bowl tight end.

I showed him the value of some of his early football cards in an issue of Beckett Football, and while flipping through the magazine he said, “I hope I’m not a common.”

Kind of ironic (not to mention funny), I think. Clark is now one of the best tight ends in the game, but is as much of a common man as anyone you’ll ever run across.

You’d never peg Trent Edwards for an NFL quarterback. He looks as average as can be, and isn’t the prototypical big-frame, strong-arm signal caller you’d expect to see from an NFL starting QB.

Edwards’ quiet demeanor was refreshing when I met him in 2007. He was signing a bunch of autographs for NFL Auctions and I noticed how slowly he signed, which was completely different from just about every player out there. Then I looked closer and saw him signing every letter in his name in nice cursive handwriting: T-r-e-n-t E-d-w-a-r-d-s.

I asked him if it was important to him to sign a neat signature on autographed items. He responded, “Absolutely.” He said that if people are going to spend money for a simple thing like his signature, he would feel terrible if it wasn’t perfect.

Edwards clearly came across as someone who felt almost overwhelmed about making it to the NFL. He was completely respectful of the league and the career ahead of him.

Not all players can be Dallas Clarks or Adrian Petersons. But the ones who take the time to really show their respect for the game they play, and their appreciation for the fans that follow them: those are the ones who are humble at heart.

Those players are the ones who will be loved years after they retire, the ones who make cheering for our heroes so much fun.