Halladay Another Test for Brian Cashman

The story of the New York Yankees over the last fifteen years or so has been quite remarkable. During their run of six World Series appearances and four Championships, the team was able to find success through a solid blueprint: develop talent from within the system like Derek Jeter, Andy Pettitte, Jorge Posada, Bernie Williams and Mariano Rivera, then surround them with veterans like David Cone, David Wells, Roger Clemens, Paul O’Neill and Tino Martinez.

When things got interesting was when the latter group of veterans retired. With the core of Jeter, Posada and Rivera intact, the Yankees notoriously went to the market year after year, picking up or trading for the best established players they could find to round out their roster. And yet, while the likes of O’Neill, Tino and Wells are cherished by Yankee fans to this day, big ticket players like Mussina, Giambi and A-Rod have been supported, but it’s been a step below love and appreciation. And to be fair, it’s been nine whole years since the Yankees won a World Series (sarcasm intended), which is unacceptable to their fans. And since the core has been there, done that and earned their rings, it’s the players with big contracts who have taken the blame. 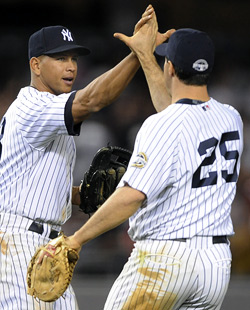 Aside from the fleeting affection of Yankee fans, a model based mostly on bringing in mercenary players simply doesn’t work in the long run. And I don’t mean this in the sense of some emotional cliche like “they’ll never be true Yankees loved by the fans”, but rather, on a practical level of building the best team possible. If you draft and scout well, you can control premium players in their peak years, for a fraction of what they would cost as a free agent. This is how you obtain franchise players like Chase Utley, Evan Longoria or Ryan Braun. At the start of the decade, the Yankees ignored this because they could, spending big money and trading prospects whenever possible to pick up the next hot player.

It becomes a cycle that continuously mortgages the future for the benefit of the present. Draft picks and younger players keep moving through the system to other teams, veterans who only have a few years of productivity get signed to contracts for double that length, and you need to keep playing “catch up” to remain competitive for this season in light of the mistakes from past.

To his credit, Yankees GM Brian Cashman noticed this problem, and took steps to rectify it. He made a fairly public demand of wanting to run the baseball operations without George Steinbrenner meddling in the plans (now he has Hank and Hal to deal with, which is a story in itself). George was notoriously impatient and always wanted to “win now”, while Cashman recognized the value in having a long term plan. And he’s put one in place, and stuck to it.

Case and point, Johan Santana was on the trade market in the winter of 2007-2008, and practically there for the Yankees to take: at the cost of say, Phil Hughes, Ian Kennedy and Melky Cabrera. In a move that declared a change in Yankee philosophy Cashman decided to pass, holding onto his best young players at the time. The line had been drawn, and the days of the Yankees simply using their young players as fodder in trades had ended.

But now we’re in 2009. Unlike the Santana situation, which was in the winter, we’re now in the middle of the season. As I write this, the Yankees are a game back from Boston in the division, and have a 3.5 game lead in the Wild Card. If a little extra push is needed, it’s there for the taking in Roy Halladay.

And thus, Brian Cashman will be tested again. If he wants to give up on his plan to build from within, he can trade some combination of Joba Chamberlain, Phil Hughes, Austin Jackson, Jesus Montero and Francisco Cervelli. The farm system gets gutted, but the Yankees get Halladay and Sabathia at the top of their rotation: two workhorses who have the best reputations in the league for throwing tons of innings, and pitching complete games. They’d be a force for the rest of the season, and more importantly, very intimidating in the playoffs. 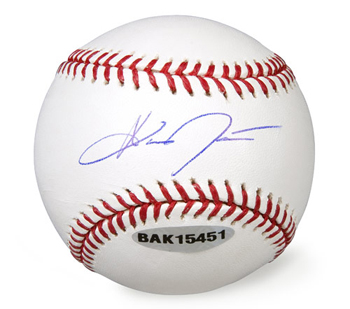 A baseball autographed by Austin Jackson, the Yankees' top position player prospect. Is he a future Yankee great, or will he play in Toronto?

In this scenario, the Yankees would once again mortgage their future for the present, but who could blame them? It’s not like Jeter, Posada or Rivera are getting any younger. A-Rod and Teixeira will be with the team until 2017 and 2016, respectively, and probably won’t have much left in the tank as those contracts wind down. And while Halladay would become a free agent after the 2010 season, it would give the Yankees the opportunity to sign him to an extension before that moment comes (much like the Mets did with Santana).

Let’s also not forget that as much as the Yankees love to throw around money, free agent pitchers won’t be flocking to pitch in their new home run happy stadium. I know that if I was a free agent pitcher looking for my next employer, I’d run as far away as I could from the Yankees right now. The notorious New York pressure is bad enough, but couple that with a launching pad of a stadium, and that contract for a bit less money in say, Los Angeles or San Francisco starts to look like the best one on the table.

So if you’re Brian Cashman, what do you do? Go all in and make your team even more of a juggernaut right now at the expense of a poor future, or hold onto your young players, and go with what you have? The 2009 Yankees can become even stronger at the expense of the 2013 Yankees, and with their demanding fanbase and ownership feeling like they’re long owed championship #27, I wouldn’t want to be in Cashman’s shoes with this decision.


It’s always a gamble to see how a pitcher will react to playing in New York. I’d like to see Halladay pitching in pinstripes though.


he will be, but they will be the red and white pins of Philly! lol:D

Beantown Management: Why I Have Theo Envy | Upper Deck Blog


[…] week, I wrote about Brian Cashman’s struggle to turn around the Steinbrenner endorsed big ticket pla… of sacrificing the long term plan to obtain short term gains. This week, I’ll look at his […]


[…] but add Lee or Halladay, and suddenly it looks even better. As for the rival Yankees, it seems that Brian Cashman doesn’t have much of a decision to make after all: the Jays are reportedly asking for both Hughes and Chamberlain, which is a price too steep to […]