The buzz around the NHL Draft is unlike any other event – and this weekend’s event in Montreal was no exception. As far as fan access to the players goes, it’s simply unmatched. Where else can anyone who buys a ticket walk around the arena concourse and bump into future stars (like John Tavares, Victor Hedman and Matt Duchene), current All-Stars (Roberto Luongo and Marc-Andre Fleury were spotted chatting with fans and signing autographs) and all-time hockey legends Larry Robinson, Ray Bourque and Guy Lapointe just to name a few?

The team at the Upper Deck booth did its part to make the event special for fans as well, by offering a great redemption program for a commemorative six-card Draft set, the popular P-card station, and a free autograph signing with Columbus’ stud rookie (and Quebec native) Derick Brassard (shown below signing and posing for a photo with a young fan). 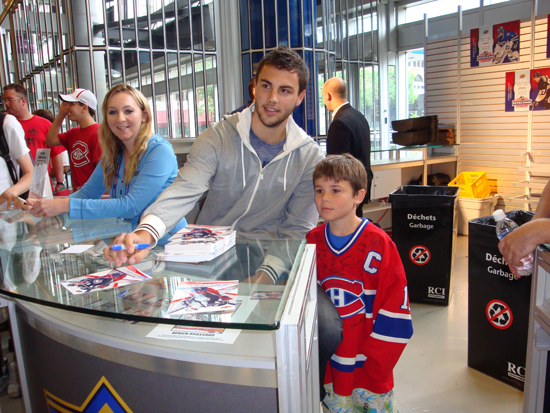 Of course, the main reason that we were all there was the 2009 NHL Draft itself. I mentioned the significance of this year’s draft class in my post last week, so you can imagine the electricity inside the Bell Centre as the countdown began toward the announcement of the first pick. Further fueling this anticipation in the stands was a trade rumor (no Draft is ever complete without a few of those, is it?) that had the Habs on the verge of pulling off a blockbuster deal with Tampa Bay for both Vincent Lecavalier and Martin St. Louis. In short, it felt like the place was about to explode.

As the three of us in charge of the Upper Deck photo shoot and signing room (more on that shortly) counted down the minutes to the 7:10 p.m. start of the Draft, I took a moment to walk down the runway from our position and snap this quick picture of the Draft floor. 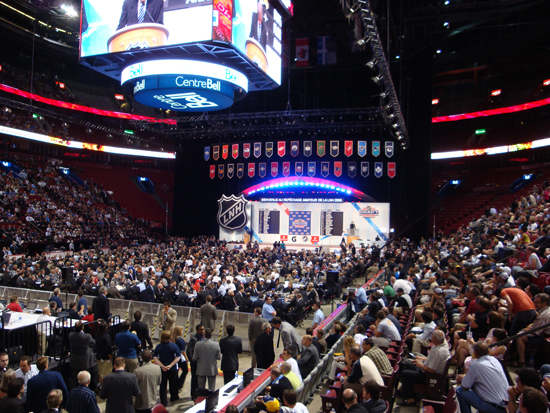 I had just returned to my post in the Upper Deck photo and signature station (perfectly situated as the first room off the main tunnel leading to the Bell Centre floor) when Commissioner Gary Bettman took to the stage to address the attendees. The Commish thanked the crowd in French before turning over the podium to New York Islanders GM Garth Snow for the announcement of John Tavares as the first pick. The 2009 NHL Draft was now officially underway.

Now in case you’re wondering what this whole process is like, allow me to give you a firsthand explanation. Once players are selected at the Draft, they are immediately escorted by NHL and team officials through a gauntlet of media and photo stations – one of the first of which was the Upper Deck room. The three of us in the room prepped it a few hours before the Draft by organizing all of the pucks and mini-sticks that the players would be signing (the photo below shows our signing table moments before John Tavares arrived), as well as the photographer’s area and the station where we organize the event-worn jerseys at the end of the process. 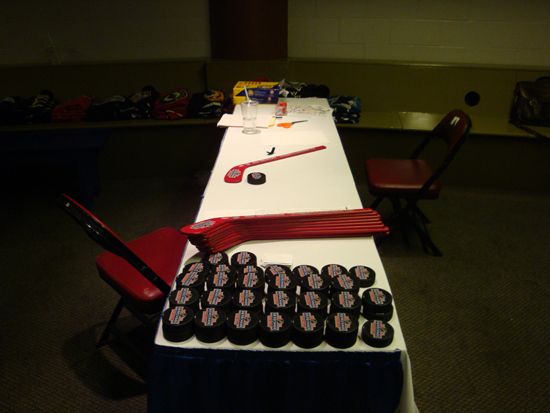 About a half hour after Tavares was selected by the Isles, we heard a loud commotion and saw the flicker of flash bulbs outside our door. The marquee name from the 2009 NHL Draft had arrived. Once John was in the Upper Deck room, we guided him from station to station; our photographer took a series of posed shots for use on 2009-10 trading cards, he signed some pucks and mini sticks, and finally, we asked him a few questions for the blog.

After leaving the Upper Deck room, Tavares was escorted down the hall to the next licensee where they ran him through their stations. This entire process runs on a tight schedule, so all of the licensees work hard to make sure that things run as smoothly and efficiently as possible for the athletes (at this point, the guys haven’t even had the chance to celebrate with their families yet, so we try to make the process as quick and painless as possible).

As Tavares was leaving, Victor Hedman entered the Upper Deck room. Tavares stopped for a moment to congratulate the big Swedish defenseman and the two exchanged hugs before John was ushered on down the hall. We then led Victor through the same stops that John had just completed. Check out the photo below of Hedman signing his first-ever autographs for Upper Deck. 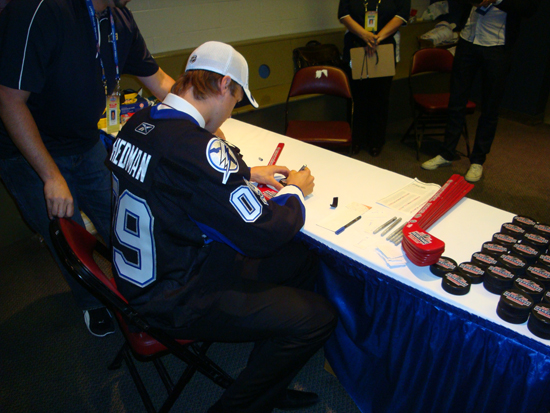 By the time Friday’s first round ended, Upper Deck had collected photographs, signatures and event-worn jerseys from all 30 of the evening’s selections. We also had the opportunity, for the first-time ever, to interview a good number of the draftees: most of the guys admitted to being collectors as kids and were pretty excited about the prospect of seeing their first Upper Deck cards later this year. Look for these interviews right here on the blog over the next few days

On Saturday we repeated the same process outlined above 180 more times for Rounds 2 – 7. Somewhere around 5 p.m., the Upper Deck crew broke down our room, boxed everything up, transferred it to the shipping area at the Bell Centre and prepared to say Adieu to Montreal. The photo below shows the gang as we prepared to leave the arena on Saturday evening. 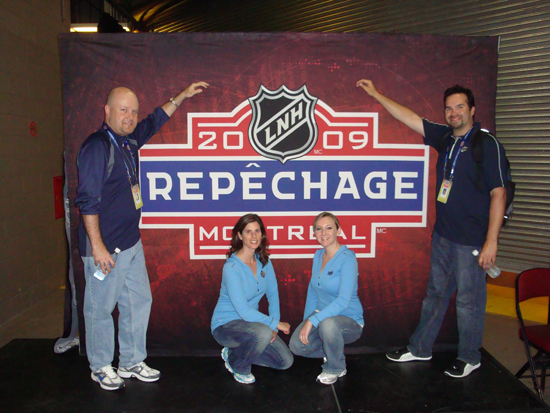 
Would there happen to be a copy of an autographed Brassard photo, I would LOVE to have one?!


I’d love a Brassard photo too if possible!