In comparison to the other major professional sports leagues, the NHL is about as close to year-around as it gets. Case in point, we’re less than two weeks removed from the Stanley Cup Finals, but this Friday already marks the official beginning of the 2009-10 NHL season. That’s right: the 2009 NHL Entry Draft is upon us.

So, as I pack my bags tonight for my early-morning flight from San Diego to Montreal, I thought I’d share a few thoughts on the event from the perspective of a fan who will also be working at the event.
First off, a little bit about who I am and what I’ll be doing in Montreal. I’ve worked in product development at Upper Deck for almost 10 years and am currently responsible for defining and managing the content (checklists, athlete signatures, game-used memorabilia, etc.) that goes into Upper Deck’s hockey trading card products.

Now, as every collector knows, the single most important element in the majority of card sets is rookies. So, with this in mind, I’m sure you can imagine what an absolutely massive event the NHL Draft is for those of us who spend our lives obsessing over who the next hot rookie will be. Added into the mix this year is the fact that the 2009 Draft is no ordinary draft – it’s the TAVARES draft! 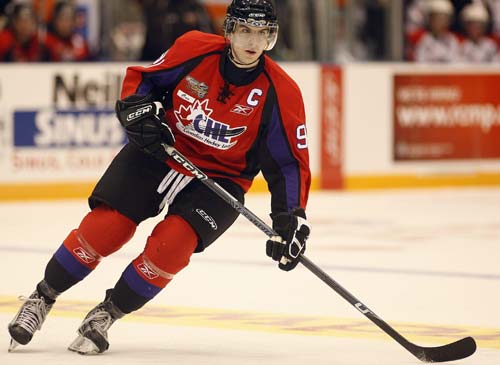 In case you haven’t heard of him, John Tavares is the most-hyped rookie to enter the NHL since, well, Upper Deck spokesman and 2009 Stanley Cup Champion Sidney Crosby. He’s described by scouts as the kind of “elite level scorer” that comes around maybe once in a generation, and is all but certain to be the No.1-overall pick of the Islanders on Friday evening. From a trading card standpoint, Tavares is the Holy Grail of rookies – the type of player who can single-handedly turn a good year for the hobby into a great year.

The 2009 NHL Draft is far from a one man show, however. Swedish defenseman-extraordinaire Victor Hedman, Canadian juniors star Matt Duchene and a handful of other high-ceiling prospects make this one of the deepest drafts in recent years – so much so that there have been murmurs in recent weeks that the Isles are considering taking either Hedman or Duchene instead of Tavares with the first overall pick. Personally, I can’t see that happening, if for no other reason than the fact that Tavares would sell thousands of additional season tickets and provide a badly-needed marquee name on Long Island.

With all that said, my job at the Bell Centre this weekend will be to witness first-ever Upper Deck signings by all of the first-round picks, assist with photo shoots of each player, look for new Draft-themed content ideas for 2009-10 Upper Deck products, and take as many cool pictures and videos as can fit on my memory stick. Oh yeah, and I’ll also be blogging from the Bell Centre with behind-the-scenes stories, player interviews and some of the aforementioned photos from Friday’s first-round festivities.

Until then, I bid you a fond adieu…


[…] course, the main reason that we were all there was the 2009 NHL Draft itself. I mentioned the significance of this year’s draft class in my post last week, so you can imagine the electricity inside the Bell Centre as the countdown began toward the […]