Like many Americans, I tend to watch hockey casually; if I come across a game while flipping around I’ll watch for a bit, especially if the matchup is intriguing, and/or if the score is close. From my point of view, it combines the back-and-forth action of soccer with the speed you get from skates. And hey, I’m not ashamed to admit that a little extra physicality makes things more interesting.

And out of all four American sports, I feel that hockey has gained the most from high definition television. I’m sure some folks will disagree with this, especially given all the crazy camera angles and analysis FOX does with football. After a play, they’ll generally show you five different camera angles, along with some graphics for good measure. But oddly enough, it’s the scaled down approach in hockey broadcasts, forced by the flow of the game itself, which I believe utilizes the technology most effectively. The action is constant, so there are very few breaks for slow motion, instant replay, graphically intense recaps, and so on.

What I like most about hockey broadcasts though, is that because the action is so constant, you generally have one camera angle that pans back and forth. So on my giant HD television, because the perspective rarely changes, hockey feels more like “you’re there” than any other sport.

Three paragraphs in and I’m blathering on about why hockey is awesome in high-def: nerdy, I know. But what I’m getting at, because I’m sure you read the title of the post first, is that the NHL Winter Classic should be coming to Fenway Park this year, as the Bruins take on the Flyers (not 100% confirmed, but it’s being reported everywhere today). For those who aren’t familiar, the Winter Classic is a NHL game held in an outdoor venue on New Year’s Day, and is considered a huge showcase game for the league. 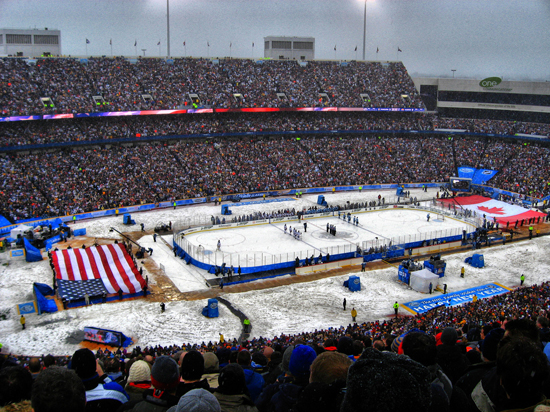 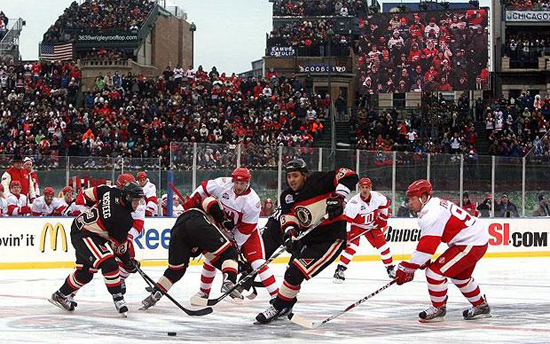 There have been other outdoor games in NHL history, but this new series will be entering its third year. In 2008, the league took advantage of the Buffalo Sabres’ rabid fanbase by packing Ralph Wilson Stadium (home of the Buffalo Bills) with over 70,000 fans as they took on the Penguins. Going from a huge stadium to a more classic venue, the Blackhawks played the Red Wings in 2009 at Wrigley Field. And if the reports are true, the NHL will now visit baseball’s other classic stadium on the first day of 2010.

This series is a brilliant move by the NHL. It’s destination programming on an otherwise quiet day, and the unique nature of the venue packs the live crowd (a pretty huge feat in the middle of winter for Buffalo and Chicago), not to mention good television ratings. And hey, let’s be honest: most people are just getting through their New Year’s Eve hangovers, and I bet a few warm cups of coffee while watching an outdoor hockey game is pretty cozy, and helps. I don’t know what it is, but somehow a big hockey game on New Year’s Day just “feels right”. Much like watching the Detroit Lions lose on Thanksgiving Day.

And while I find high definition hockey to be entertaining, the Winter Classic in the same format is even better. The visual feel of the game is so unique, and you really feel as if you’re watching it from the stands in person. Granted, it’s still summer and New Year’s Day is very far away, but I’m already looking forward to seeing the game come to historic Fenway. Should be a fun game to watch as we collectively reboot from our partying.


The Winter Classic in Buffalo was a great success. The “Winter Classic” is a great step to getting hockey into living rooms around the country that otherwise would never stop and watch.

I also agree with you about hockey in HD. No other sport improves as much as hockey once it is in HD.