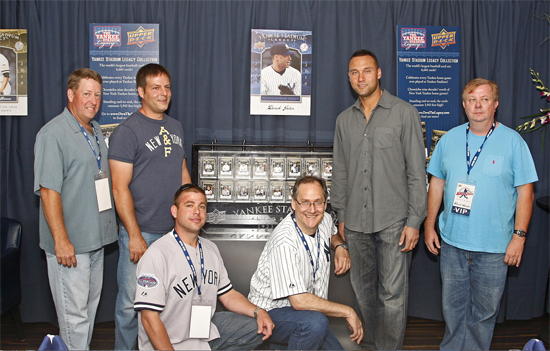 They traveled to New York City from as far away as Panama, Sacramento, Little Rock, Pensacola and Largo, Florida. And thanks to Upper Deck, their tickets were covered, as were their hotel accommodations and meals. “They” were the five Yankee Stadium Legacy Collection contest winners that Upper Deck promised would meet none other than New York Yankees Team Captain Derek Jeter if they were able to put together the company’s mammoth YSL baseball card insert set from 2008 chronicling every Yankees home game ever played at the old Yankee Stadium starting in 1923.

Each of the fantastic five not only pieced together the enormous, 6,661-card collection of inserts, but they did it before the April 30, 2009, deadline closed. Leo Wiznitzer, in fact, made things interesting by sending in his set on the final day of eligibility. “I wasn’t even aware that there was a grand prize involved,” he explained, “not until about ten days before the contest ended.”

But when he heard about the chance to not only meet Jeter, but to also have lunch with the 11th Yankee Team Captain in history, it was too cool to pass up. “Mariano Rivera’s actually my favorite Yankee player, but Jeter is such a terrific guy,” said Wiznitzer, who was simply putting the set together for several months because he wanted to. 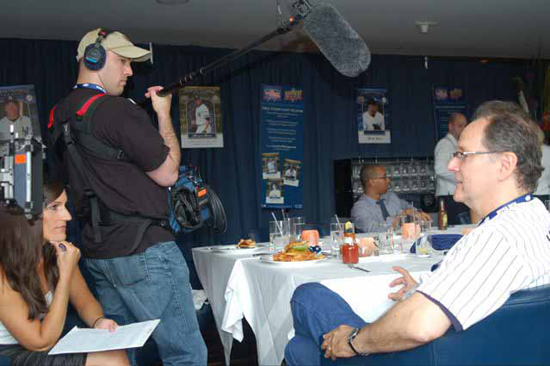 On Tuesday, June 16, Wiznitzer, who lives in Panama, along with Tommy Baxter (Little Rock); Chuck Sauter (Pensacola); Kent Hayes (Sacramento); and Josh Adams (Largo), all got their chance to live out a baseball dream by having lunch with Jeter at the NYY Steak restaurant, which is located inside the new Yankee Stadium; attend batting practice on the field that afternoon; and then watch the Yankees battle the Washington Nationals that evening from field-box seats up the third-base line.

“This was even better than I expected,” said Hayes, who brought along his eight-year-old son, Everett. “Jeter was super.”

Starting at 1 p.m., with the YES (Yankees Entertainment & Sports) Network filming for a small feature they plan to run next week and Yankees Magazine on hand, I introduced each of the five winners to Jeter, who was gracious and seemed excited to meet his guests as well as get a glimpse of the Yankee Stadium Legacy Collection set we had on display at NYY Steak. “Can I get this, with the cards?” he asked me smiling, after I told him it was a 1-of-1 display case. After some personal grip-and-grin pictures were taken, everybody sat down to lunch and a casual question-and-answer session ensued. 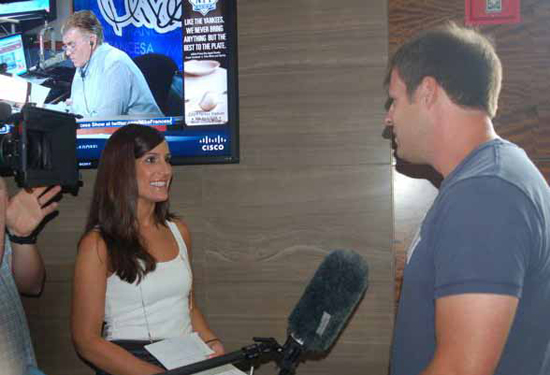 Tommy Baxter gets some press on YES Network

“Who was your sports idol growing up?” “What’s your favorite sports movie of all time?” “Do you have any pregame rituals you can share?” “Did you play other sports growing up?” “When did you sign your first autograph?”

Jeter was courteous and provided well-thought-out answers to each of the questions. As lunch orders were taken (Derek went with a chicken dish, veggies and a tall glass of water), he answered with responses like: “Dave Winfield was my idol growing up. My favorite sports movie is the original Major League. It’s such a funny movie. And I loved 61*. I don’t really have any pregame rituals or superstitions I do – unlike Wade Boggs and his need to always eat chicken before every game – but I always get to the ballpark early [2:30 p.m. for a 7:05 start], stretch and listen to some R&B music. I played every sport growing up, but I always liked baseball the best. And I signed my very first autograph while I was in high school, which I thought was kind of strange at the time.” 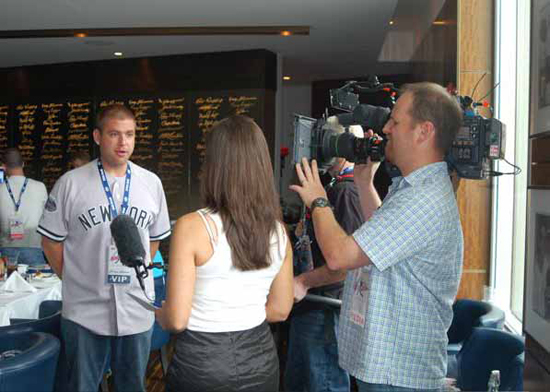 At 2:10 p.m., following a pair of short interviews with YES and Yankees Magazine, Jeter relocated his seat to make his virtual world debut at UpperDeckU.com, Upper Deck’s recently unveiled online world for kids. More than 300 kids from across the country signed up to ask the star shortstop various questions and he knocked out hundreds of answers with the help of keyboard aficionados Carrie Peterson, Upper Deck’s online marketing manager, and Christine Lee, the company’s events planner. He giggled, drank coffee and seemed amazed that the online avatars on the flat screen in front of him represented actual kids eager to chat.

At 3 p.m., Jeter said his good-byes to everyone, including the wait staff at NYY Steak, signed a few select items for the YSL contest winners, and then made his way toward the clubhouse by exiting through the kitchen door. The YSL winners, still buzzing about their time with Jeter, were then treated to a private tour of Yankee Stadium, which included a memorable visit to Monument Park behind the centerfield wall. 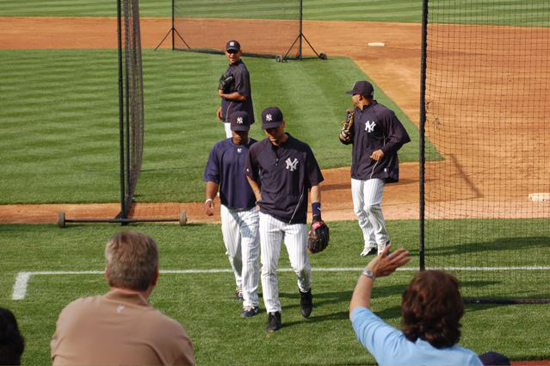 Jeter coming in from shagging flies in the outfield.

At 5 p.m., five of the guests were granted on-field access for batting practice. Sauter and Adams were part of the contingent, while Hayes sent his son, Everett; Wiznitzer let his 12-year-old nephew, David, attend; and Baxter watched his 11-year-old daughter, Madeleine, accompany the group down to the field. And almost like it was scripted, Jeter – on his way to the dugout after shagging flies – stopped by and signed more autographs for Upper Deck’s lucky attendees as well as for some other rabid fans nearby. 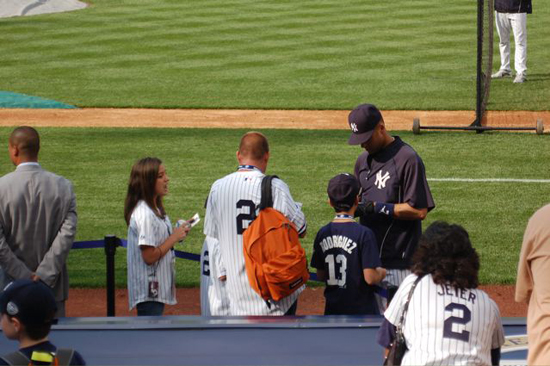 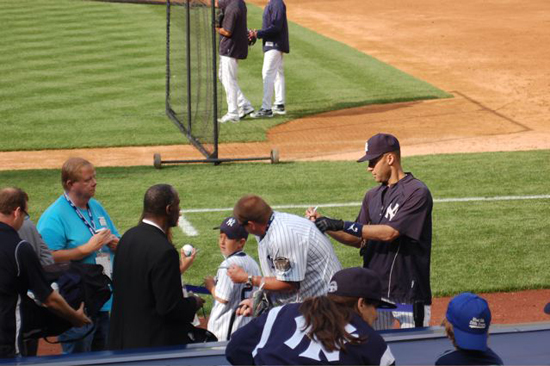 Jeter signs Josh Adams’s Yankee jersey on the No. 2.

The game ended on a high note as the Yankees won, 5-3, and Mariano Rivera notched his 15th save of the season (497th of his career). And even though Jeter went 0-for-3 with a walk, and left the game with a nagging ankle injury in the seventh inning, the evening was a complete grand slam for Upper Deck’s five winners and their guests.

“We had a great time,” said Hayes. “I don’t think we could have asked for more.”


[…] you’ve been following our blog the last few weeks, you’ve seen our coverage of the Yankee Stadium Legacy winners, not to mention Derek Jeter’s appearance in […]


[…] Stadium Legacy collection (well over 6,000 cards, one for each game played at the old stadium), and got to meet Derek Jeter before a game as a reward for their hard […]