Note from editor: In case you weren’t aware, Upper Deck put out some very cool Presidential Predictor cards last year to coincide with the election. Aside from featuring some creative images of the candidates (sometimes in classic sports poses), we also ran a sweepstakes where the winner would get to throw out a first pitch at a Major League Baseball game. The winner was just selected: check out the story (and some of the cards) below!

Logan Millard, a sports memorabilia collector from Salt Lake City, Utah, didn’t think his chances were too good at winning Upper Deck’s “Presidential Predictor First Pitch” sweepstakes last year, but he didn’t care. He just loves collecting trading cards and anything on top of opening up a pack of Upper Deck cards would have been “pure gravy.” As it turns out, Millard wound up getting a whole lot more.

Through a random computer selection made from tens of thousands of entries in Upper Deck’s 2008 “First Pitch” sweepstakes, the 27-year-old territory manager for a medical staffing company was deemed the grand prize winner in November. By virtue of plugging in upwards of 20 different static codes off the back of Upper Deck’s “Presidential Predictor” insert cards which packed out in Upper Deck 2008 Series One and Two Baseball launches, Millard won the opportunity to throw out the ceremonial first pitch at a Major League Baseball game this season. And he will be making his MLB debut – of sorts – when he steps on the mound at tomorrow night’s San Diego Padres/Philadelphia Phillies game at Petco Park. 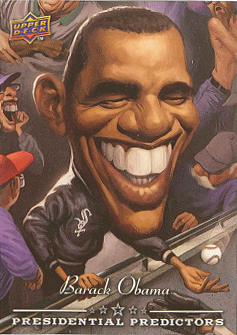 “Am I nervous? Yes,” said Millard, whose baseball playing experience ended at Little League. “In fact, I’m heading over to the high school field right now to throw a few more pitches. It’s still 60 feet, right, from the mound to home plate?” 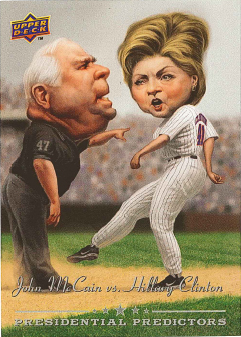 Sixty feet, six inches, to be exact. But he may not have to throw off the rubber. He just wants to make a good impression. “I tried a couple of trick things, but I just want to make a nice, solid throw to home plate. Nothing too fancy.”

Born and raised in Salt Lake City, Millard is a self-admitted Chicago Cubs fan who graduated from the University of Utah with a degree in public relations. “We don’t have a pro baseball team up here and I don’t really like the [Colorado] Rockies, so I guess I started following the Cubs ever since my grandmother sent me a Ryne Sandberg trading card when I was a kid,” he said. 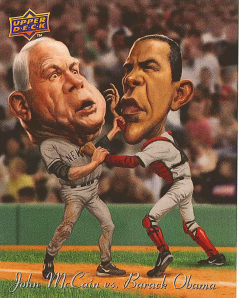 “I collected baseball cards as a kid, and then I got away from it. But when I read something about Upper Deck’s rare Hillary Clinton Presidential Predictor insert cards being in the market, I thought I should try and find one. And when I started opening packs, it’s like something inside of me just went, ‘Why haven’t I been doing this forever?’ 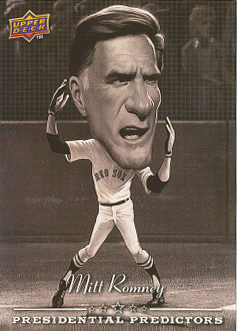 Millard’s prize package from Upper Deck includes round-trip airfare for two, plus hotel accommodations in San Diego. He’ll be accompanied by his wife, Janelle. “Our four-year anniversary is coming up on June 18, so I guess this is my present to her,” he said.

“And you know, I haven’t found that Hillary card yet, but I’m still looking.”


[…] case you missed out post from earlier in the week, Logan Millard won our 2008 Presidential Predictors sweepstakes, and won the opportunity to throw out a pitch at a Major League Baseball game. He went to the mound […]